Advertisement
Home / Entertainment / With Midnight Mass, Mike Flanagan takes the idea of horror beyond the walls of interpersonal relationships

With Midnight Mass, Mike Flanagan takes the idea of horror beyond the walls of interpersonal relationships

At times Crockett Island almost becomes a metaphor of Wuhan, where some are desperately trying to stop a strange contagion from reaching the mainland 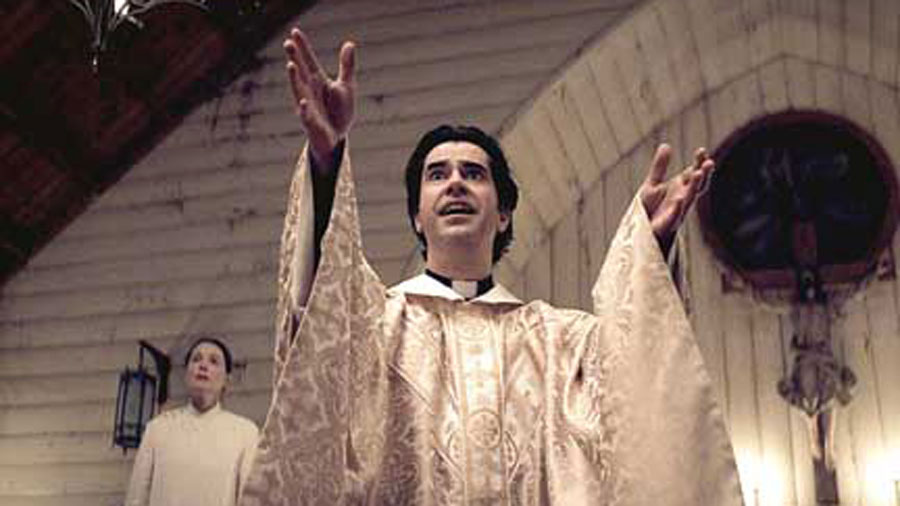 What lies after death? The recurring question, which has led mankind through an unknown, unstoppable and silent universe right since the evolution of man, is something which sits at the core of Mike Flanagan’s new horror series Midnight Mass, currently streaming on Netflix.

The only reason why we can push our bodies to move faster than possible or a blind man dreams of daylight or a soldier in a war front picks up his gun inspite of knowing his fate, is because of survival instinct — the fear of death. For centuries, man has tried facing this eternal crisis — what lies beyond death and if death is the ultimate truth, then what’s the reason to move on ? The futility of life strikes us suddenly, resulting in the sudden realisation of man being a lonely wanderer amidst an infinite universe of which he is mostly oblivious and all his emotions part giving way to the most basic emotion, ‘fear’, the ‘horror of being’ engulfs him.

That’s exactly where Mike Flanagan’s genius lies in his sense of interpreting ‘horror’ beyond the supernatural folklores, monsters, possession, witches, headless horsemen etc. Flanagan brings out the horror which is instilled in the very condition of being human. Previously, in his breakthrough series The Haunting of Hill House and partly in The Haunting of Bly Manor he interpreted horror in a way the audience has never seen before — horror unraveling in the course of a relationship, weaving the fear of unknown with the threads of very known relationships which become unknown to us several times in real life, fear that is rooted from deep love.

As the character of Steve Crain says in the concluding monologue, that a divorce or a bad marriage can be a horror story. Flanagan once said in an interview, that for him a horror story is always a love story, because once you love someone, from that very moment they become a ghost, a memory that never leaves you. Thus, throughout the experience of Hill House, chills run down the spine of the viewers while the eyes twinkle with teardrops.

With Midnight Mass, Flanagan takes the idea of horror beyond the walls of interpersonal relationships and addresses the horror which has been unfolding all over the world since ages due to religious fanaticism, blind faith, human beings being lab rats to scientists to achieve a truth which is mechanical, against human nature, like a clockwork orange and the darkness which lies within us because of our primeval desires. The primary characters of this seven-hour-long mini series, just like the rest of us, are struggling with the question of ‘what awaits after death’ and in their own way are struggling to anaesthetise the condition of fear of life’s true purpose and futility. Previously, Flanagan mostly adapted his works from authors like Stephen King, Shirley Jackson, Henry James (though his bone-chiling film Oculus was an original screenplay), but this time he chose to go ahead with his own writing, which was stored inside of him since the beginning of his career as a film-maker. Thus, in this screenplay, often I found his characters suffering from the complexity of Albert Camus’s ‘absurdism’; he has instilled the Sisiphyian complex inside few of them, a state where the characters, like every human being, strive towards finding significance and clarity for life while the universe remains ever silent, nature moving at its own pace.

The plot unfolds amidst the ever-changing shoreline on Crockett Island, a place which witnesses people moving away to the mainland every year, leaving the island with 147 inhabitants, a shrinking fishing community struggling through a huge economy blow caused by a major oil spill in the sea.

The fabric of the mundane for Crockett’s residents suddenly change after the arrival of the sinner and the saviour. Riley Flynn (Zach Gilford) returns after serving prison time for being charged with killing a woman accidentally as a result of drunk driving. Once an altar boy, Riley is not only recovering from alcoholism but also from the idea of religious blindness, steering him towards atheism after studying all religions during his prison time and along with him returns the saviour of the town, a mysterious priest, Father Paul (Hamish Linklater), with a strange suitcase to replace the former priest of the island, Monsignor Pruitt, who was sick and disappeared on his way to Damascus. Soon after his arrival, he is termed as the saviour of the town, as he starts performing miracles, beginning by making Leeza (Annarah Cymone), a wheelchair-bound teenager, walk again . Soon his actions are wrapped around by the blind ribbons of unquestionable faith and shared amongst the community by the zealous, unscrupulous and fanatic Bev Keane (Samantha Sloyan), an important member of the St. Patrick’s church, who quickly becomes successful in projecting Father Paul as the messiah for the hopeless island. With some unforgettably good monologues (which at times becomes monotonous by over defining a situation with the mastery of words instead of relying on the power of audio/visual) and wide lenses, Flanagan and cinematographer Michael Fimognari bring out the emptiness and desolation lingering around on the inside and outside of the town and its characters.

The cinematography is excellent as the camera almost hides its presence and focuses on capturing the performances as honestly as possible, leaving behind any form of jugglery. The special effects make-up team is brilliant. Immaculate editing, which encompasses the audience with its hypnotic rhythm, clearly reflects Flanagan’s mastery over the craft of editing and his years of professional time as an editor, as editing, both in the writing and on the edit table, is the most important aspect of making a horror film where timing is everything.

The scoring by The Newton Brothers focuses on the harsh sound effects of the island and the usage of some resplendent hymns juggles the audience between feeling unsettled and finding respite. A fairly average and at times unconvincing VFX and some exceptionally memorable performances by Kate Siegel, Hamish Linklater, Zach Gilford, Rahul Kohli and a bit too good Samantha Sloyan (Bev), Flanagan unfolds a horror which rises under the skin slowly like a fever, mounting up to an unnerving and unforgettable conclusion which’ll stay deep within me for many years.

Flanagan unfurls horrors which spiral down to the lowest squalor of the staircase of human darkness, be it the horror of a disturbed childhood and a violent marriage which haunts Erin Greene (Kate Siegel), the school  teacher of the island, the horror of the town Sheriff (Rahul Kohli) and his son Ali, the only two Muslims in town, who are constantly subjected to the town’s Catholic community’s disgust, thus unfolding the horror which people are subjected to due to an increasing Islamophobia and the marginalisation of the minority communities all over the world. The Sheriff shares his horror of how the minorities have been treated since 9/11 by the United States of America and tells his son that be it Allah or Jesus , everything fell inadequate and failed in front of the pancreatic cancer which took away his wife/ Ali’s mother, he reminds Ali, that God doesn’t favour few and turn his back towards others. The series also reflect how politics all over the world, time and again, has used religion as a tool to blind people with unquestioned faith, resulting as a mass manipulating opium for their own benefits.

Flanagan also hits the horror of a virus, created to benefit human nature by going against the very fabric of it itself, often reminding the viewer of the horrors of the Covid-19 pandemic and its mysterious roots of creation and spreading across the world. At times Crockett Island almost becomes a metaphor of Wuhan, where some of the characters are desperately trying to stop a strange contagion from reaching the mainland while some people are doing the opposite. Inspite of being philosophical, the series doesn’t become verbose, it keeps the viewers hooked. Midnight Mass is Flanagan’s most personal project till date, since he himself has been dealing with issues like alcoholism and being ‘once an altar boy’ who was deeply affected by the horrors of the Bible. He pours his deep understanding towards life meticulously in his work, which is rare to see these days when the artform has been reduced to detergent powder commercials and has become like any other product.

One of his central characters, Riley, is like Sisyphus, who in Greek mythology was banished by the Gods for cheating death and subjected to perform the repetitive task of carrying a huge boulder uphill, only for it to roll down every time it neared the top, repeating this action for eternity. Each night Riley calmly lies on his bed as the camera tilts in an unsettling motion, as he silently watches the spectre of the girl he had accidentally killed looking at him, thus embracing the act of repetition, like Camus says, “One must imagine Sishyphus happy because he finds solace in the repetition of life”.

Flanagan, through Riley and Miss Jeane, brings an immensely sensitive, difficult and beautiful conclusion by making the world of believers and non-believers meet through acknowledging the fact when both the characters embrace despair, reject false hope, become conscious of life’s meaninglessness and leave behind the need to control and define an universe which lies way beyond our control. They move towards living the unpleasant truth to its fullest and find the real meaning of ‘self’ and its indestructible presence everywhere , in the ground and up above the cosmos — a self, which can’t be contained within the materialistic ‘me’. A dawn comes on Crockett Island, a dawn which’ll stay with me, made me more empathetic and the words of Jimmy Webb’s infamous song rung in my ears, “I’ll fly a starship/Across the Universe divide/And when I reach the other side/I’ll find a place to rest my spirit if I can/Perhaps I may become a highwayman again/Or I may simply be a single drop of rain/But I will remain/And I’ll be back again”.

The views expressed in this article are that of the author’s and do not represent those of the newspaper.