Advertisement
Home / Entertainment / When puppets hold the string to the tale of mahabharata, with t2

When puppets hold the string to the tale of mahabharata, with t2

Anurupa Roy, the director of Mahabharata — The Game of Gamble, spoke to t2 about her world of puppets ahead of the staging of the play at GD Birla Sabhagar on August 20. The chat... 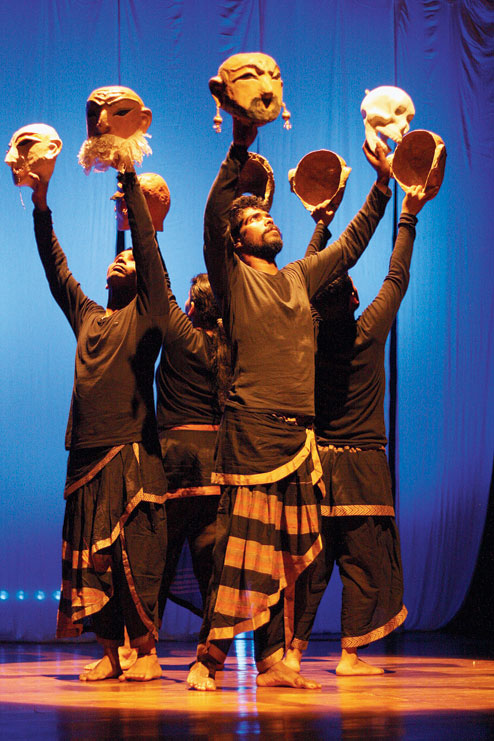 What: Centre Stage Creations presents Mahabharata — The Game of Gamble in association with t2

The play: Mahabharata by Katkatha Puppet Arts Trust, New Delhi, is a performance with puppets, masks, shadow puppets and other materials by a handful of humans as co-stars. It’s a retelling of the story of the Mahabharata, through the personal journeys of several characters from the epic.

What could have averted the war of the Mahabharata? What choices could each character have altered? And what choices can each one of us alter? What fixed beliefs must be questioned and let go of to prevent such a war in future? Can we start by acknowledging that none will survive such a war and thus it must be prevented? The show throws  up these questions and makes us ponder.

Anurupa Roy, the director of Mahabharata — The Game of Gamble, spoke to t2 about her world of puppets ahead of the staging of the play at GD Birla Sabhagar on August 20. The chat...

How did you become a puppeteer?
It started as a childhood interest and hobby. I started my company Katkatha about 18 years ago. It is something that came from exposure in school, watching puppet shows in Delhi as I grew up. Later, I learnt puppet theatre at the University of Stockholm, Sweden, and also in Naples, Italy.

What can people expect from Mahabharata?
See, the epic Mahabharata has been traditionally played with puppets over a few thousand years across India. In our production, we work with traditional puppet forms like leather shadow puppetry from Karnataka. We also use its exact opposite… masks and sculptures, which is very consciously non-traditional, individualistic and a stylised theatre form. Just like painting has changed over the years, cinema has changed, so has puppet theatre. The idea is to present that changed form where we as puppeteers don’t believe that dolls come with threads. A puppet is anything inanimate, which has life breathed into it by a living agency, who is the puppeteer. The puppeteer and the puppet have an interesting symbolic, metaphoric relation. And that relationship is what we are playing with in Mahabharata.

Are you focusing on a particular chapter in the epic or is it the whole story?
No, we have 14 characters from the epic, and we are looking at their individual journeys with soliloquies. We are looking at that point in the life of these characters which made them choose war as opposed to not fighting. It was a war that killed many. The play is about some of the main characters and their backstories, stories which are often not known or less discussed. We are also looking at characters who are looked at as either white or black, and we are trying to look at the grey areas.

Your puppets range from three inches to 40ft… do we get to see them all?
Not in this show. Generally yes, our puppets are three inches to 40ft tall. But in this show, most of them are of human size, some smaller. The show has traditional leather shadow puppets from Karnataka, Japanese-style Bunraku puppets, masks, choreography inspired by Kalaripayattu and Chhau, creating collaborations between martial dance, puppets and masks.

You make the puppets yourself?
Yes, we do it all ourselves. The puppets we are using in this show took about eight months to make… about 17 masks and two main puppets. Plus, several smaller masks and puppets.

How has the response been so far?
This is a co-production with a French puppet theatre festival called the Festival Mondial des Théâtres de Marionnettes. This year we are going to perform in France at that festival in September. We don’t know what the reception in Europe is going to be. But in India, we have performed about 13 times. It’s interesting that a lot of young people don’t know much about the epic Mahabharata and they think it’s old and boring. They seem to enjoy. I think the retelling is something that excites them. It’s mostly the psychology of the characters that excites them. I think it surprises the audience.

Puppet shows are often associated with kids. Is it a kids’ show that would appeal to adults as well?
See, what we are performing is for adults. We are not doing a children’s show. I don’t have much idea about the Calcutta audience now, I haven’t performed there in a long time. I think there is a certain idea that puppetry is for children and also that in puppet theatre humans shouldn’t be visible. We hope to break the myth.

What are you expecting from the Calcutta audience?
My first apprenticeship was actually in Calcutta in a company called The Puppet, which was founded by Raghunath Goswami. He had passed away by the time I went there to intern. I worked under Swapna Sen. That time Calcutta used to be the big puppet hub in the mid-Nineties. I think the Calcutta audience is very open to new stuff and they would appreciate the show.