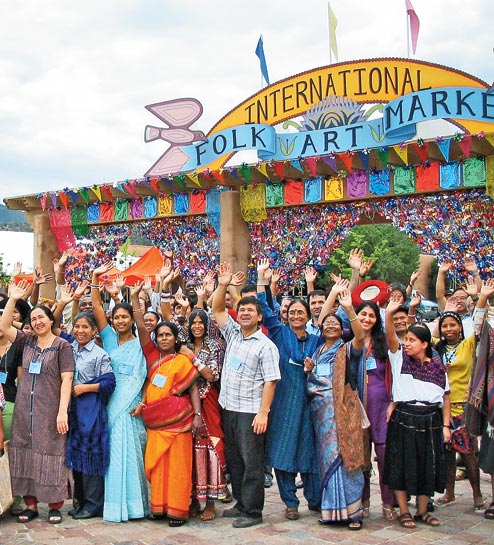 Shamlu Dudeja is all set to celebrate her three-decade-long association with kantha. She picks some career milestones for t2...

• 1986: Three artisans take four plain silk saris from me back to their village in Santiniketan to try embellish them with kantha work.

• 1987: A visit to the village gives me the vision of empowering the kantha artisans who are producing exquisite needlecraft but living in depleted conditions.

• 1989: Malika (daughter) helps develop kantha further, this time on salwar-kurta sets. With the support of Shirin Paul, Malika holds her first kantha exhibition at The Park.

• 1991: I am invited to hold another exhibition at Commonwealth Institute. Kantha throws and stoles are a big hit.

• 1993: Another exhibition is organised at Gandhi Memorial Center (US). Malika’s Kantha Collection & Trading is registered.

• 1994: As kantha’s popularity grows, we identify women team leaders to train artisans in their areas.

• 1995: SHE (Self Help Enterprise) is formed to bring the community of scattered kantha artisans together.

• 1996: Rohit Khosla designs kantha outfits and holds an exhibition at The Oberoi Grand!

• 2001: SHE is invited to train prisoners in kantha craft in Chhattisgarh.

• 2002: Governor Viren J. Shah orders kantha wall hangings for his office and some guest rooms in the Raj Bhavan.

• 2003: We introduce bling to kantha textiles and showcase saris and wedding lehngas at Bridal Asia in Delhi.

• 2005: We debut at the annual exhibition of the International Museum of Folk Arts, Santa Fe. This continues till date.

• 2010: We’re invited to the International Quilt Week in Yokohama, Japan, where kantha was the only hand-stitched quilt!

• 2011: We celebrate the silver anniversary of our kantha revival initiative.

• 2012: During her Calcutta visit, Hillary Clinton drops by our kantha stall set up at the Taj Bengal for her group. She buys a Tagore panel to gift chief minister Mamata Banerjee.

• 2016: We gear up to celebrate 30 years of our work. On October 3, we will hold a fashion show of kantha work at ITC Sonar. An exhibition of kantha panels and garments will be on at the hotel on October 4 and 5, 11am-7pm.