The albnum took a full year to finish, with some help from buddies in the music community 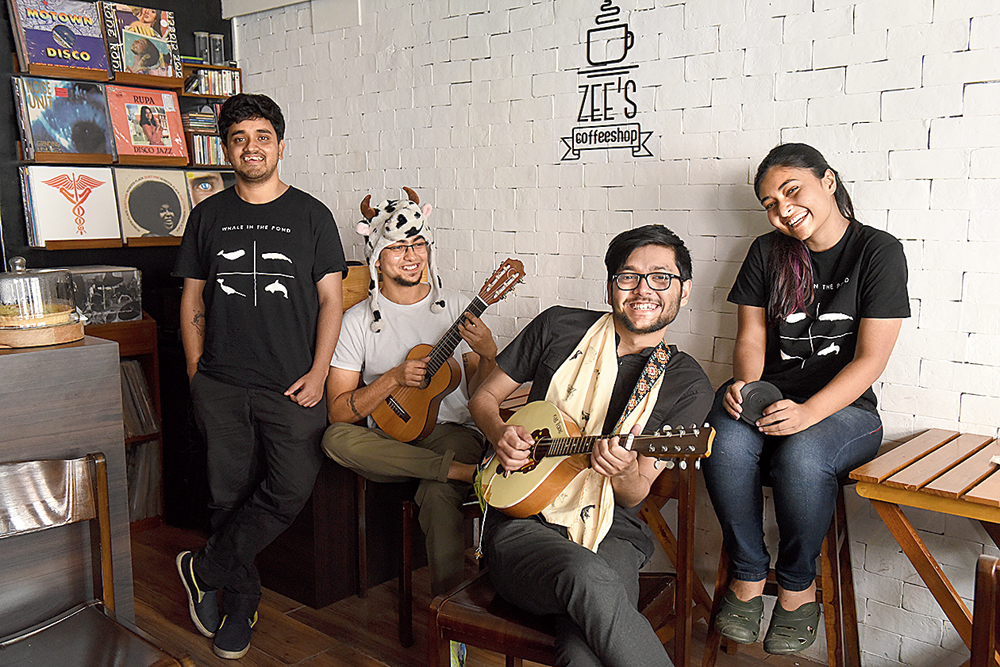 After releasing their first album, Marbles, in June 2017, folk band Whale In The Pond is back with a new album, titled Dofon. This album — now available on all digital platforms — took a full year to finish, with some help from buddies in the music community. The Telegraph caught up with the band for a chat.

Tell us about the album.

Sourjyo: Dofon is a six-song concept album about how we are ushering in the end of the world, realistically. Not like an alien invasion or something. The entire concept came to me after May 2019, when there was a heatwave in Calcutta and I felt really...

Sourjyo: And I had to book into Oyo because I don’t have an AC at home. And then there was the water crisis in Chennai as well. You saw the Australian bushfires, which results from years of negligence and faulty policies. Dofon is about all of those things and also about things closer home.

Deep: After two of our listening sessions people in the audience said: “Give us a while.” And some people messaged me: “You guys should have just sat quietly and let it sink in.”

Sagnik Samaddar: After every other song people were clapping but after Dofon it was silence.

Deep: People were like... what is happening? And Sourjyo comes in....

Deep: I feel nothing like this has come up on the Indian music scene. The indie playlist that Spotify curates is all about relationships and love... pyaar, pyaar, pyaar!

Besides the release, are there any other plans with Dofon?

Deep: We would like to turn this into a short film or a stage play.

Sagnik: I think we can pull it off.

Deep: We can. At least a theatrical production. Because there are these stories on the album and the band is just going to be playing in the background, so it’s not a gig.

Shireen: Maybe a dance because the whole story of a man (in the title track Dofon) going blind is that he starts dancing because there is nothing else he can do and doesn’t have anything else.

Deep: I don’t know if we will be able to pull it off because we are an indie band at the end of the day. Onek asha achhe (we have a lot of ambitions).

Why is the album called Dofon?

Deep: Because you can hold up two phones?!

Deep: It’s because of the story that Dofon is based on. All the other songs were lyrically written prior to 2018 and then we had to arrange and fit it into the theme. Dofon is a story I had forgotten but happened to remember in December 2018. Right before a Whale In The Pond gig, I told these guys a story about how I was a Boy Scout and we were hiking down this beachside... in Gopalpur. The place is known for rough seas and we found a message in a bottle. I don’t remember the details of the bottle but the only thing the message said, written in pencil: “Amake pele doya kore dofon diye debe. (If you find me please bury me).”

Tell us some fun things about the album?

Deep: In George Orwell’s Animal Farm he writes: “All animals are equal but some animals are more equal than others.” So we have put in Morse code at the end of Nova, which says a message that’s relevant to this. We want the people to naturally figure out what the message is.

Shireen: The Morse code was actually a point of contact for us and our friends, like Rivu, Adil (Rashid), Paloma (Majumder). All our albums have some kind of cross referencing. And Morse code features heavily in Rivu’s latest album, The Incident 2019. And also his first album, The Incredible Journey of Light, because it is about people who leave earth and they’re transmitting messages back in Morse code. Rivu actually did a guest section on Nova where he did synth work in the middle and he put a Morse message there and that’s how we got the idea to put a Morse code message at the end of the song as well. So the Morse code is a point of intersection with Rivu’s album.

Who else has worked on the album?

Deep: Adil helped us out with the mastering of the album. There is a section in Aaji bhagle kalke amra nai where people are just doing ullus.

Shireen: Those are crowdsourced from our friends. So Kabipriya Dutta Mazumder, Paloma, her mother Saswati Majumder, and my brother Nikhil Ghosh were behind it.

Sagnik: The cover art is done by Neil Ch and Sourish Dutta Mustafi had helped us with some merchandise.

What can you tell us about the sound of the album?

Deep: It’s kind of all over the place. It’s not your traditional pop for sure and it’s not traditional folk either.

Shireen: It’s a very strange blend. So I am a producer but all of us are acoustic musicians, so we’re kind of combining the two. Normally when you have a folk melody, they will straight up record their instruments, put it together and make a simple mix. But I do a lot of weird kaida stuff that would suit an electronic artiste but I don’t want to do that because these are my boys. A lot of the songs are guitar and piano based; we don’t have a drummer or percussionist because we have Deep!

Sagnik: And his anger!

Shireen: I produced that too!

Deep: It’s very difficult to pigeonhole the feel of the album...

Shireen: Because it won’t give you any idea of what the other songs would be. Our first song is folk-y but it’s got an electronic base. It’s the kind of thing you would hear in a mela where there’s a lot of random people and music is playing on a phata speaker. Then there’s Night’s End which is quite soft and guitar centric and then comes Where Is Your Heart?, which is flamenco and goes in another direction. Then you have Kite/Loon, which is piano-centric and like a full-on electronic film score. Then you have Nova, which is a party song with a four-on-four beat and the verses are kind of chill. It has a Latin-y feel to it but then you have an instrumental interlude and then a space-y thing where Rivu did his section. And then you have Dofon, which is like baul-pop.

Will Dofon have a follow-up album?

Deep: The single is a marriage between Stevie Wonder and Bihu. This is the first song we actually wrote together. For Marbles and Dofon, we would just take what Sourjya had written and break it apart. But for this song I came up with the riff, we came up with the lyrics, the narrative. And from the general response, people like Dui thappor a lot. The song is like a conversation between a parent and a child. Another thing that we have been toying with is an idea of an instrumental album.

Shireen: The reason why I get uncomfortable when people come and tell me that I play so many instruments is because I play the piano and the melodica. They’re separate instruments but the interface is the same.

Deep: I play the guitar, I play bass guitar! (Everyone laughs)

So what are the different instruments you guys play?

Deep: There are some that we are missing. Kalimba! But if we get access to more instruments, we would obviously play them. I can’t do wind instruments but these two (Shireen and Sagnik) can and I’m very happy with my string instruments.