After successful careers as an author, film producer and entrepreneur, Twinkle is all set to roll out a digital platform 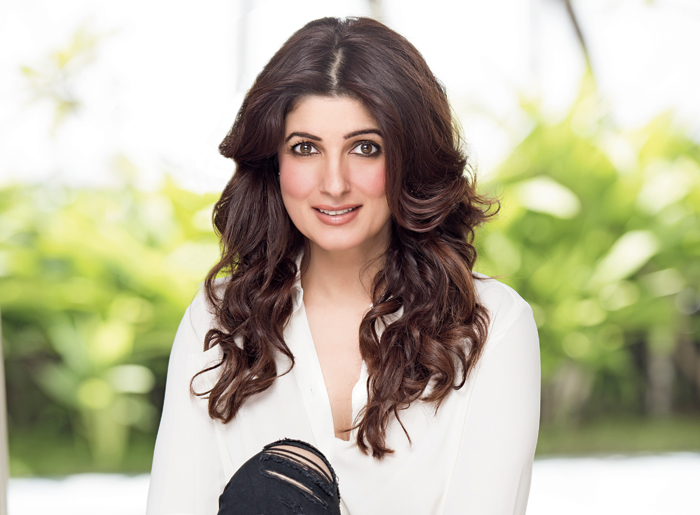 "As a child, I think I developed a sense of humour as a defence against other kids teasing me about my name or my weight. Today, it has all paid off. I find humour in incongruous things, in things that are, in fact, brutally honest," she says.
Picture: Dabboo Ratnani
Priyanka Roy   |   Published 28.09.19, 01:26 PM

Known for her irreverent sense of humour — book to newspaper column to Twitter — Twinkle Khanna has carved out a whole new niche for herself.

The 45-year-old author, entrepreneur and film producer is now all set to don another hat, rolling out her digital platform Tweak — a forum for women, of women and by women — on September 30.

With topics ranging from women’s enablement, culture, sustainability, parenting, clean beauty, wellness, democratic style and fashion among others, Tweak promises to bear Twinkle’s signature stamp of irreverence, coupled with humour, optimism and empathy. The platform aims to provide a judgement-free forum for women to ask questions, seek advice and engage in meaningful debate.

In a chat with The Telegraph, Twinkle talks about the premise and philosophy of Tweak and what makes her Mrs Funnybones!

Congratulations for Tweak! What was the idea behind launching this digital platform and what’s the core focus of Tweak going to be?

When I started writing and the newspaper columns, books and even Pad Man (the 2018 film, starring husband Akshay Kumar which shone the spotlight on menstrual hygiene) for that matter, struck a chord with many people. Women reached out to me and I realised that there were many women just like me who were looking for ways to make their lives easier, to find a way to be equal and hold their own. Mrs Funnybones is a singular voice but I needed to have a collaborative platform to reach the number of people I wanted. And so I came up with Tweak. Tweak is a platform that speaks to women in an irreverent manner and without dumbing it down. It is a place to find solutions that give you maximum results with minimum effort.

How will Tweak be different from other similarly themed digital platforms?

Most platforms are focused on a singular topic, but Tweak is an umbrella that has verticals from work, parenting, culture, wellness and sustainability. What I noticed was a void where women were either being told to get a $4,000 Gucci dress and at the other extreme, were asked to shop at Big Bazaar. Tweak is unique in that sense because we make the aspirational completely accessible.

You are known and appreciated for your honesty and humour, your irreverence and your ability to call a spade a spade. How much of that is going to be reflected in the content of Tweak?

Everything I do is a reflection of my ideology. I have been lucky that my editor and my team are all like-minded women who have the same vision and authenticity. So I think it should be relatively easier to ensure that Tweak carries the same qualities.

What are the issues and concerns closest to your heart that you want to showcase on the platform?

I think we would be looking closely at breaking even more taboos and myths. I am someone who believes in clean living and I hope to advocate that as well. It is also a space that will encourage young writers and entrepreneurs.

What do you think are the most under-addressed issues that need to be spoken about in this country?

I believe that there is still a lot of work regarding women’s roles, whether it is getting equal educational or career opportunities. Mental health is also something that we have been sweeping under the carpet all this time and should become less of a taboo topic.

How hands-on and involved will you be in the content being put out on Tweak?

I am by nature a control freak so I don’t think there will be any content on Tweak that I can claim went in without me noticing. I do hope that in time I can take a few steps back and sit down to work on my next book.

You have a family of highly creative people. Will their advice or tips be sought as far as the content on Tweak is concerned?

They are my sounding boards and while I do discuss Tweak with my family, I don’t think they really understand what I am trying to do here (smiles).

You wear multiple hats, among them being that of an author, an interior designer and a film producer. What’s the role you are enjoying the most right now?

I do wear multiple hats and my endeavour is to pull a rabbit out of each one. I do numerous things, but I do them one at a time. The only thing that is a constant, week after week, are the columns. Otherwise, if I am writing a book, then that’s where I will be completely focused or if it’s a movie then I will focus a little less on other things. There may be an overlap sometimes, but the main focus is always on that one particular project before I move on to another.

You are ‘Mrs Funnybones’. Where do you get your sense of humour from and what is it that makes Mrs Funnybones genuinely laugh out loud?

As a child, I think I developed a sense of humour as a defence against other kids teasing me about my name or my weight. Today, it has all paid off. I find humour in incongruous things, in things that are, in fact, brutally honest. Because there is no one-liner or a joke that does not hold a kernel of truth at its core.

Is there too much pressure to be funny and irreverent at all times or does it come naturally to you at all times?

There is pressure, but you get used to it. Luckily, I have managed well enough so far.

A refreshing thing about you is that despite coming from privilege you don’t live in a bubble, with your writings always managing to strike a chord and resonate with the common reader. Has that been organic or have you had to work towards it?

I am interested in people, how they live, what they say…. I have no qualms about eavesdropping or asking a million questions. The other aspect sounds rather ungrateful but I have always tried to live as normal a life as it was possible to live within my circumstances and I try to provide a similar environment for my children.

You’ve always spoken about how most of your films, now looking back, make you cringe, primarily because you think you weren’t a very good actor. But if you had to prepare a showreel of three performances that you think are good enough, which would they be and why?

I have amnesia. Bollywood bludgeoned my brain to the size of a bean, so I can legitimately claim that I can no longer remember that period of my life!