The ‘Thespian’ passed away on Wednesday morning at the age 98. t2 pays tribute to the screen legend who has influenced, hallmarked, defined and described Indian cinema in the last century 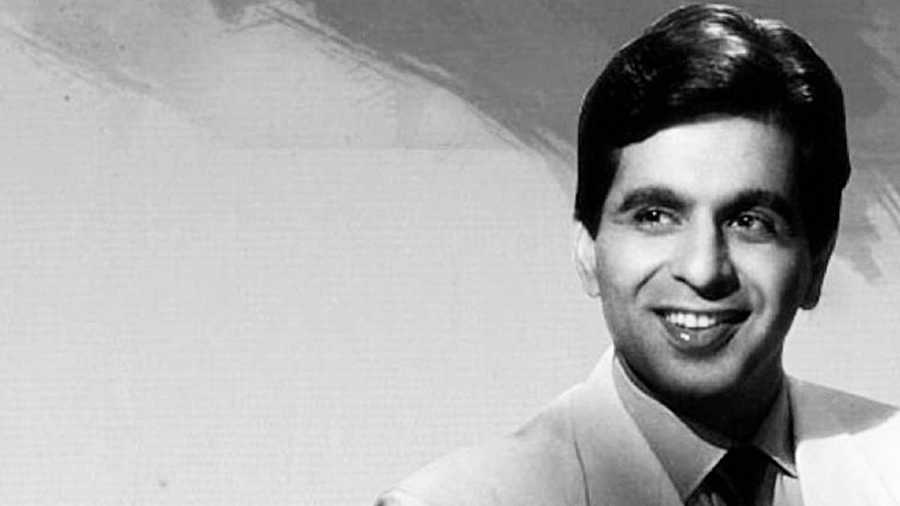 Actor Tom Alter, then a new graduate from the Film and Television Institute of India (FTII), had once gingerly approached Dilip Kumar and asked him the most basic question every actor wants to know: “What’s the secret to good acting?” “Sher-o-shayari,” was the reply from the actor, who had by then graduated to being unanimously acknowledged as the ‘Thespian’ of Hindi cinema. And possibly of Indian cinema.

Poetry in motion is perhaps the best way to describe Dilip Kumar the actor. The screen legend, who breathed his last on Wednesday morning after a prolonged illness, was just two years short of turning 100. But Indian cinema, over the last century, has, without a doubt been influenced, hallmarked, defined and described by Dilip Kumar and his time on screen. On Wednesday, shortly after his passing, Amitabh Bachchan, who has consistently hailed Kumar as his acting guru, tweeted: “Whenever the history of Indian Cinema will be written, it shall always be ‘before Dilip Kumar, and after Dilip Kumar’”.

Dilip Kumar was a method actor at a time when Indian cinema had hardly heard of method acting. His style — a curious, but winning mix, of the melodramatic and the naturalistic — became the Bible for generations of actors to follow and be inspired by. Whether it’s Amitabh Bachchan or Aamir Khan, Naseeruddin Shah or Kamal Haasan, Shah Rukh Khan or Shahid Kapoor, there is a little bit of Dilip Kumar in almost every Indian actor.

It’s a well-documented fact that Dharmendra was so inspired by Kumar, who he considered his matinee idol, that he decided to leave his village in Punjab and head to Bombay to become an actor. Years later, Dharmendra, by then Bollywood’s ‘He-man’, acknowledged, “Dilip Kumar is that brightest star whose shine I stole to light my desires”. In an interview last year, Naseeruddin Shah had revealed, “Dilip saab’s were the only Hindi movies my father allowed us to see when we were children”.

While he has inspired subsequent generations of actors, it was Ashok Kumar’s acting that held Dilip Kumar in thrall. In 1940, when he took up a job at Bombay Talkies, he watched Ashok Kumar on set every day. Later, Ashok Kumar even gave him formal lessons on acting.

Dilip Kumar was an institution in a world where the word is not as loosely used as it is now. Thespian apart, he was also known as ‘The First Khan’ (though in the 1940s, it was thought prudent for him to change his name from Mohammed Yusuf Khan, a fruit merchant with no exposure to the world of cinema, to Dilip Kumar to reach out to a wider audience), but it is the adage of ‘Tragedy King’ that defines him a little bit more than the rest. 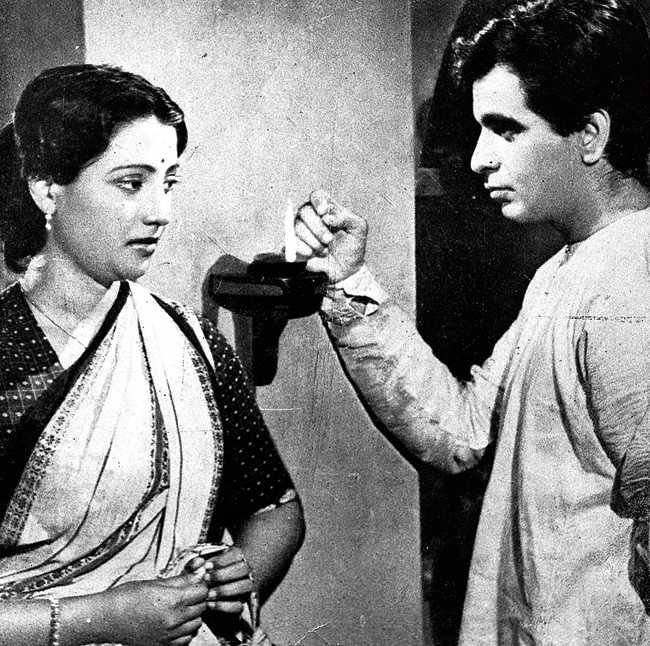 With Suchitra Sen in Devdas
Sourced by the correspondent

With good reason. The pathos and pain that Dilip saab powerfully brought to many a legendary screen turn remains the gold standard for many. A combination of ego, defiance and self-pity defined his tragic turns. From the blind singer seeking out his childhood sweetheart in the 1951 film Deedar to the toy seller-turned-hopeless alcoholic in 1952’s Daag. Many — and by that we mean the likes of P.C. Barua and K.L. Saigal, Soumitra Chattopadhyay and Shah Rukh Khan — may have played the eponymous lovelorn hero in the screen adaptation of Sarat Chandra Chattopadhyay’s Devdas — but it is Dilip Kumar’s immersive portrayal of a man pining for his love and his profound understanding of Dev’s ego, his alcohol-induced breakdown and his complete refusal to move on, that remains the most seminal portrayal of what is perhaps Indian cinema’s most tragic hero.

In a BBC interview in the 1970s, when asked why his tragic performances remained most memorable in a repertoire that included much more, the actor summed it up beautifully: “Tragedy itself lasts longer. The effect of a tragic story, like that of Laila-Majnu or Shirin-Farhad, remains after the story has ended. Happiness and joy pass away quickly. In my opinion, my performances as a tragic actor have been memorable because the stories themselves have outlasted their time.”

Dilip Kumar embodied the tragic protagonist like second skin. Guilt, remorse, confusion, longing, the pangs of unrequited love... it was all there in his eyes and his carefully developed melodramatic yet understated style of acting. His diction, in particular, set him apart from his contemporaries. Lengthy passages of dialogue delivery easily rolled off his tongue, even as he communicated every word, syllable and punctuation mark. He was known to be “painfully method” on set, but that was always in service of a world, a film and a part that he wanted to make his own, without any compromises. 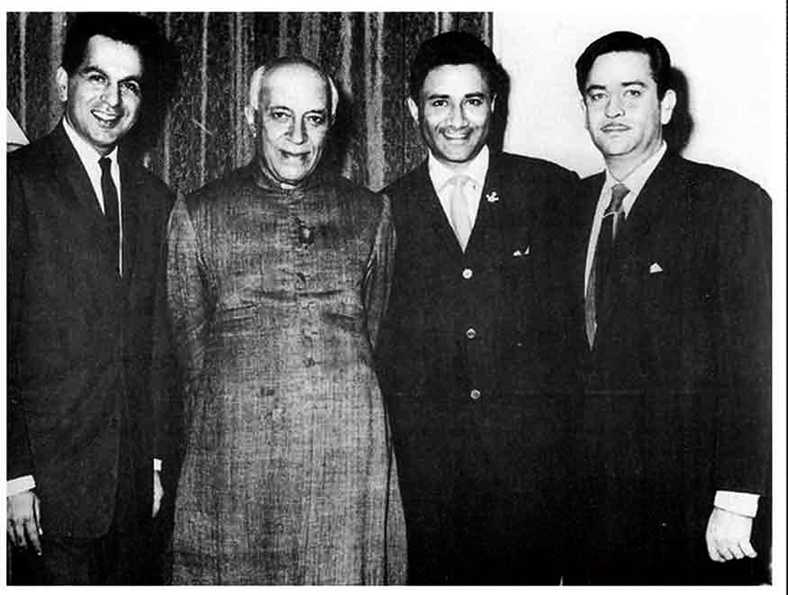 However, a string of heavy performances in successive tragic roles — among them classics like Mughal-e-Azam and Gunga Jumna — forced him to seek therapy in London, following which the actor experimented with lighter roles. Needless to say, he excelled in every genre, bringing a special something to every part.

Like the starkly different twins in Ram Aur Shyam, the swashbuckling prince in Aan (a part that reportedly earned him many a Hollywood offer, which the actor refused), a Robin Hood-like character who is also a master of disguises in Azaad and a Buster Keaton-inspired performance in Kohinoor. Andaz — in which he co-starred with Raj Kapoor and Nargis — had him portray a character with shades of grey. 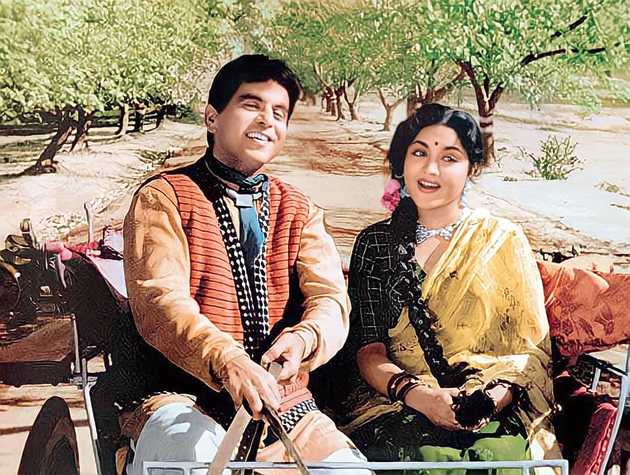 With Vyjayanthimala in Naya Daur

In Madhumati, Bimal Roy’s seminal reincarnation story co-written by Ritwik Ghatak, that spurred off a series of similarly-themed films, he once again played a double role, teaming up with the film-maker once more after Devdas. Man vs machine was the theme of his 1957 pioneering film Naya Daur, directed by B.R. Chopra, which succinctly questioned the price of progress. Pick a role of any shade, a genre of any kind, a theme of any range, and Dilip Kumar had the ability to do justice to it.

That’s largely because he slipped into any part with ease, but consistently retained his originality. Kumar, widely considered a Nehruvian hero and part of the starry triumvirate which also comprised Raj Kapoor and Dev Anand, was a natural at a time when Kapoor modelled himself on Charlie Chaplin and Anand was known for bringing a mix of Gregory Peck and Cary Grant-inspired urbane sophistication to screen. Dilip Kumar won everyone over by just being himself. A fact that Shah Rukh Khan summed up in a tweet — “To the one and only, who amazed and inspired the world by just being himself” — on the legend’s 98th birthday last December. 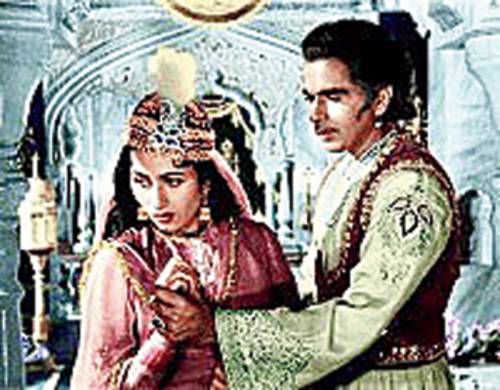 With Madhubala in Mughal-e-Azam

Dilip Kumar wasn’t the most good-looking leading man of his time (that crown possibly belonged to Dev Anand and later to Dharmendra), but there was something about his presence, both on screen and off it, that made him irresistible. Even as millions of women in the audience swooned over him, his leading ladies found his charm hard to shake off. A long relationship with Kamini Kaushal went kaput, an intense romance with Madhubala ended in heartbreak, their chemistry as Salim and Anarkali in K. Asif’s magnum opus Mughal-e-Azam almost mirroring real life. A budding romance with Vyjayanthimala fizzled out, and in 1966, Dilip Kumar married actress Saira Banu, who was 22 years younger than him. They remained partners till his last day. 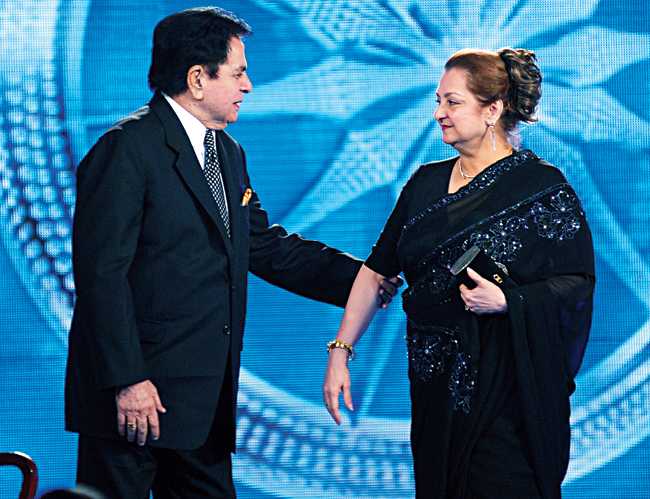 Besides being a prolific and decorated actor — he holds the Guinness World Record for winning the maximum number of awards by an Indian actor — Dilip Kumar was keen proponent of the fine arts. He had a special affinity towards Urdu and was a keen listener and even practitioner of music. In fact, in Hrishikesh Mukherjee’s directorial debut Musafir (1957), the actor sang the classical number Laagi nahi chhoote alongside none other than Lata Mangeshkar. “Yusuf bhai aaj apni chhotisi behen ko chhodke chale gaye,” Mangeshkar tweeted on Wednesday. 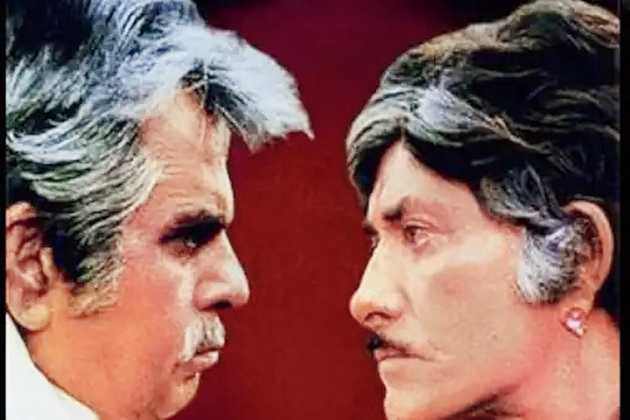 With Raaj Kumar in Saudagar

But it is in front of the camera where Dilip Kumar found his comfort and calling. A brief slump in his career saw him take a hiatus from 1976 to 1981, but he powered back in his second innings, with strong turns in many a big-budget production. Karma and Mashaal remain memorable, so do Kranti and Vidhaata. But Shakti, which brought together then-superstar Amitabh Bachchan face-to-face with his idol as son and father, was bolstered by powerful performances from the two greats. He continued featuring in parts here and there, but his final role of merit was undoubtedly in Saudagar. Subhash Ghai’s 1991 film had Dilip Kumar starring alongside Raaj Kumar in a plot heavily borrowed from Romeo & Juliet. Even as a fresh-faced Manisha Koirala went ILU ILU, along with fellow debutant Vivek Mushran, it’s Dilip Kumar and Raaj Kumar going Imli ka boota that remains firmly etched in our minds. Dilip Kumar’s last film was Qila in 1998, where he played a double role. 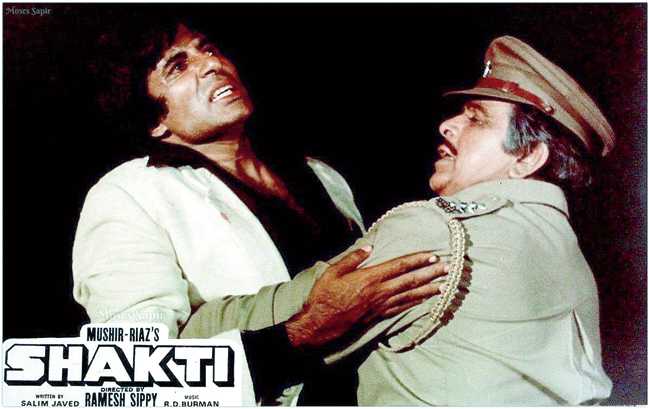 With Amitabh Bachchan in Shakti

As Indian cinema writes and rewrites its history through the coming generations, Dilip Kumar will undoubtedly find pride of place. As a method actor who never limited himself to a genre, but clearly defined one. As a performer whose time on screen has endured the test of time. As the pole star of the golden age of Hindi cinema.