Advertisement
Home / Entertainment / Thugs of Hindostan: Aamir Khan comes to the rescue in this tale that tricked with its hype

Thugs of Hindostan: Aamir Khan comes to the rescue in this tale that tricked with its hype 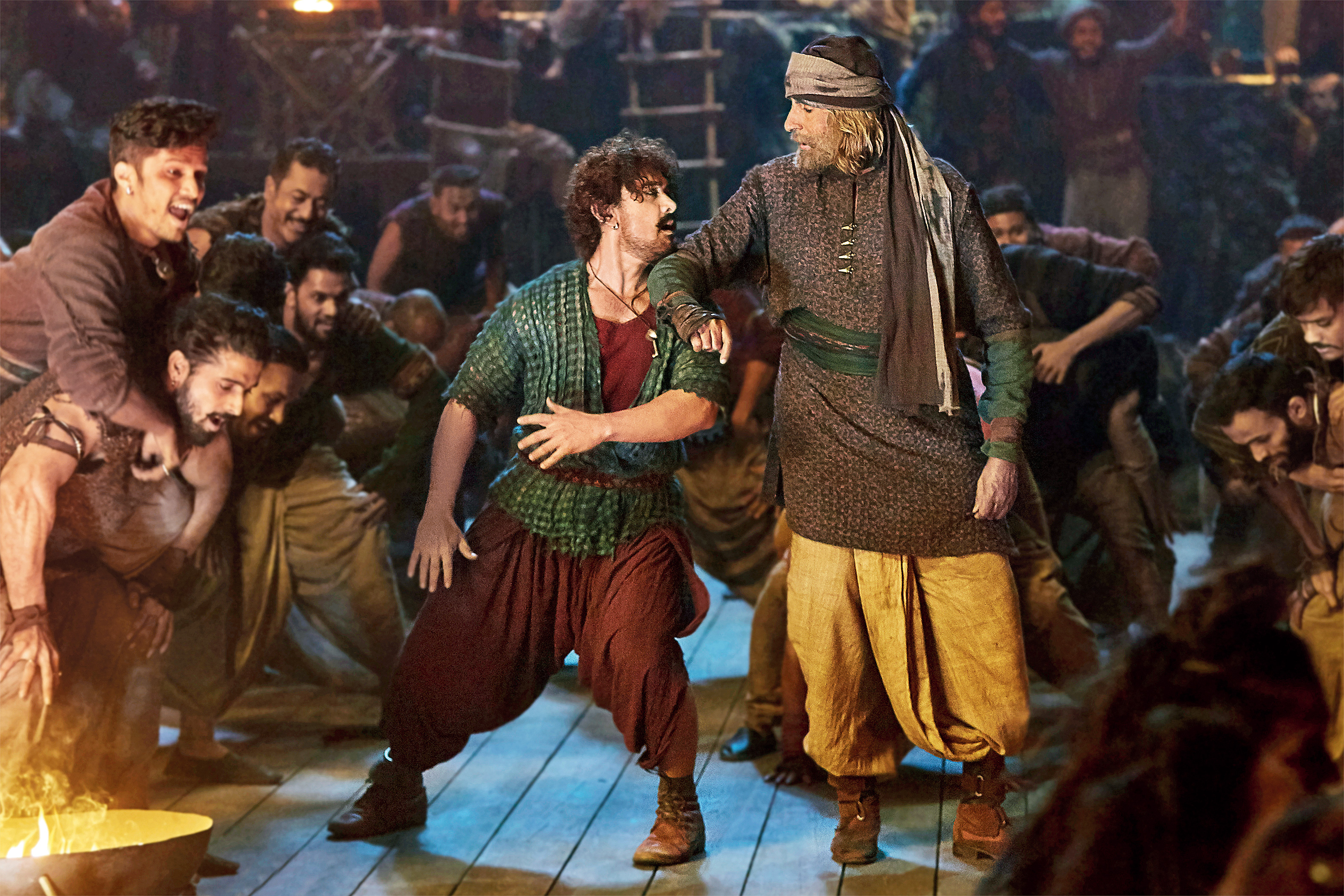 Mujhe yeh samajh mein nahin aa raha hai ki tum mahaan ho ya kaminey,” goes a character, as he rides pillion on a donkey with Firangi Mallah, played with delicious double-facedness by Aamir Khan. Firangi’s deadpan retort: “Mahaan kamina!” It’s lines like these — all courtesy Firangi and delivered almost always with a smirk or a grin — that make parts of Thugs of Hindostan watchable, an otherwise bloated and underwhelming film that sacrifices storytelling for spectacle.

Modelled on Johnny Depp’s Jack Sparrow, with Thugs of Hindostan borrowing liberally and tweaking elements from The Pirates of the Caribbean universe, Firangi is a character Aamir undoubtedly has had a lot of fun playing.

He has the best lines and his roguish charm as he double-deals his way through every sticky situation will often leave you chuckling in your seat. Firangi is a serial double-crosser, turns on the sweet talk at will and his loyalty swings in the direction that promises him a few guineas more. He’s a delight to watch, especially when he gleefully says, “Dhokha swabhaav hai mera”.

Despite Aamir’s earnestness and looming presence in almost every scene, Thugs of Hindostan is a let-down. The first hour does have its moments — aided by a couple of stunning action set pieces and a smooth-talking Firangi — but it all goes downhill in Half Two. It culminates in a long-drawn climax, replete with a Bolly-style item number playing out in the enemy’s den that harks back to the horrors of ’80s Hindi cinema.

That Thugs is a disappointment doesn’t come as a surprise. The trailer gave the feel that this could possibly be Aamir’s weakest film in years and even the prospect of the actor teaming up with Amitabh Bachchan for the first time wasn’t enough to draw footfalls in large numbers on Day One.

The biggest problem with the film is its predictable writing. There’s nothing in Thugs that we haven’t seen before and seen much better. The British colonisation of India and accounts of rebellious movements throughout the East India Company’s 200-year reign has been captured in many a film; Thugs, directed by Vijay Krishna Acharya, doesn’t add any new dimension to the story. It’s formulaic, with some spark here and there, but nothing that warrants its budget or hype.

The film opens in 1795 with the British steadily establishing their dominance on Indian turf. The East India Company has taken over almost the entire country; the kingdom of Raunakpur has managed to hold on to its freedom, thanks to its ruler Mirza Sikandar Baig (Ronit Roy). But the scheming General Clive (Lloyd Owen) blackmails the king, kills him and most of his family and captures his kingdom. His loyal aide Khudabaksh, the protector of the throne (Amitabh Bachchan in a role that’s reminiscent of Bahubali’s Katappa but played infinitely better by Sathyaraj) rescues the kingdom’s young princess Zafira and takes off with her to the forests.

A decade later, a grown-up Zafira (Fatima Sana Shaikh) and Khudabaksh, who is now also known as Azad, head a rebel group that unleashes frequent attacks on the British on land and in water. Their larger goal is to ultimately get to Clive, but the British attempt to thwart their plans by making Firangi infiltrate the group, win their confidence and double-cross them.

All of this sets the stage for a climax where you don’t know on which side Firangi’s loyalties lie, but the film takes so long to get to it that by the time that moment comes, you couldn’t care less.

The chemistry between Aamir and Bachchan could have made for some value-for-money moments, but Acharya never milks the scenes they have together. Vashmalle is fun, and there is a superb action piece before the interval that pits the two against each other — a mid-air powwow is nicely done — but those who walk in expecting fireworks between the two will be disappointed.

The title is a misnomer. Apart from a passing scene featuring the famous Thugee cult that Firangi hails from, the film completely glosses over the antecedents and motivations of the group.

For the amount of money spent — unconfirmed estimates peg the budget at around Rs 300 crore — the VFX is surprisingly shoddy, with the ships often looking like cardboard cut-outs.

The action scenes are the saving grace. There is a Helen of Troy moment that’s nicely done, a nod to a similar scene in The Pirates of the Caribbean, where Khudabaksh and his comrades smuggle themselves into a British ship in the guise of statues.

The geography is never made clear, but the topography — Malta to Thailand to Rajasthan — is stunningly captured by Manush Nandan’s lens.

In the run-up to release, Aamir had said that Thugs of Hindostan is a rare film of his that doesn’t have a message. It does — the idea that ‘azad’ is not a person, but a thought — but it’s repeated so many times that it loses its punch.

Aamir apart, the performances are in the same tenor as the film. Bachchan doesn’t have a single line of dialogue in the first hour but hams it up in the scenes leading to the climax. He lumbers through the dramatic moments, but his agility in the action scenes at age 76 is commendable.

Zafira needed an actor with spunk, and Fatima Sana Shaikh — a winner as the firebrand Geeta in Dangal — comes up short.

Saddled with three scenes and two songs, it’s Katrina Kaif who is completely short-changed in the film. In this age of #MeToo, Katrina’s midriff is almost always in focus whenever she’s on screen and her sole purpose in the film is to be an object of desire.

Prabhudheva’s choreography doesn’t hit the bullseye here — the athletic steps are misplaced in songs like Suraiyya and Manzoor-e-Khuda. And yes, Katrina’s gyrations should come with a ‘Don’t try this at home’ warning. A ‘watch at your own risk’ warning before the film wouldn’t be bad either.