Advertisement
Home / Entertainment / ‘There’s nothing quite like a Bond movie’

Daniel Craig on life after turning in his licence to thrill 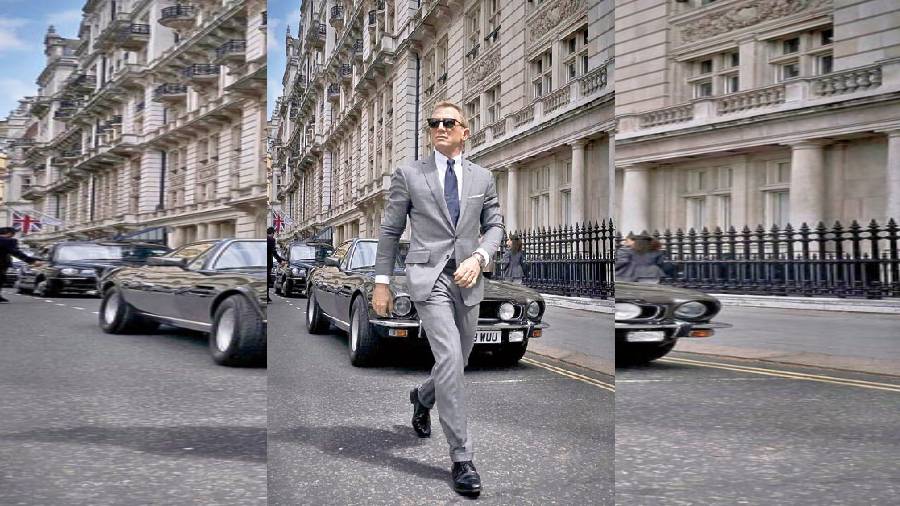 More than a year and a half ago, Daniel Craig and I met at the Museum of Modern Art to talk about his final James Bond movie, No Time to Die, and bid farewell to that suave superspy he’d been playing since 2006.

When we sat down at our table in a private room at the Modern restaurant, Craig offered me the use of a hand-spray dispenser he was carrying. “That stuff is gold dust,” he said offhandedly. “It’s some crazy thing — people are selling it for like $25 a pop.”

As it turned out, that might have been the most significant part of our interview. We spent the next hour engaged in a polite conversation about the making of No Time to Die, and how pleased he was both with the work he had done and to be finished with his duties.

We said goodbye and two days later, MGM and the producers of the Bond franchise announced they were delaying the release of No Time to Die until November, citing their “careful consideration and thorough evaluation of the global theatrical marketplace”.

Though he had no movie to promote, Craig went on to host that weekend’s episode of Saturday Night Live, which featured a blithely silly sketch about how the coronavirus might affect the making of soap operas, and Craig’s introduction of the musical guest, the Weeknd, delivered with unexpected relish. The next day he and his wife, Rachel Weisz, and their family left New York and the country plunged headlong into the pandemic.

It has been an awkward, drawn-out send-off for the 53-year-old Craig, who, from the moment he was chosen to succeed Pierce Brosnan as 007, was never an obvious or elegant fit for the character. His looks were too rugged, his film resume was too thin, his hair was too blond.

As Craig told me in that initial interview, he assumed he’d been invited to audition as cannon fodder, to make it easier to choose someone else for the part. “I was just amongst the mix — someone to dismiss,” he said, adding that, at best, he thought he’d get a dispensable villain’s role: “Here you go, have a baddie.”

When we talked again by phone in September, Craig was both his usual guarded self and a shade more relaxed. As Craig would say on more than one occasion in our conversations, he is just an actor and not to be confused with his soon-to-be-ex alter ego. These are edited excerpts.

What has the last year and a half been like for you? How are things, whatever that means to you?

They’re as good as they can be. I’m incredibly fortunate to have a wonderful family and also to have had a place out of the city where we could go and get away from kind of the craziness. We left the city on March 8. The night before, I did S.N.L., which was truly surreal. It’s been a tough year for everybody and we’ve had things go down which have not been so pleasant, but so it goes.

Is it humbling to play these characters who are defined by being capable and resourceful and then to have a real-life experience that reminds you we’re all at the mercy of these larger forces?

Well, I don’t feel like that anyway. I feel like a normal human being most of the time. I don’t feel any connection to the characters I play. I mean at all. They’re just that. So many things have been put into perspective. It’s difficult not to just look at the world in a different way. I’m sure it’s the same for everybody.

There is a video clip making the rounds from a speech when you addressed your colleagues and crew at the end of filming No Time to Die. You teared up at the end, and it was very comforting to me to see you show emotion — that you could be vulnerable that way.

I don’t show myself to the world as much as maybe people would like, but that’s my choice. It’s got me probably into trouble and has made people make up their own minds about me. But I’m an incredibly emotional human being. I’m an actor. I mean, that’s what I do for a living. And the clip you’re talking about is the end of 15 years of my life that I’ve put everything I can into. I would be some kind of sociopath not to get a little bit choked up at the end of that. Hopefully, I’m no sociopath.

If things had proceeded as planned a year and a half ago, you would have gotten to enjoy a slightly glitzier victory lap. Does this feel muted in any way?

Put Covid at the end of every sentence. I’m very sanguine about all of this. I’m just happy we’ve been able to get to this stage because God knows, a year and a half ago, none of this even made any sense or seemed even remotely possible. I’m just incredibly happy that we got to a point where we can get audiences to go and see it. I’m so desperate for people just to see it and hopefully for them to like it.

What will you miss about Bond?

I’ll miss the massive team effort that it takes. It’s nearly five years since we started this project, as frustrating and sort of anxiety-making as that can be. Sometimes it feels like it’s not going to happen, but it’s an incredibly creative process and I will miss that. I’ve got other projects I do, and they’ll reward me, but there’s nothing quite like a Bond movie.

Daniel Craig in Knives Out

You’re a parent. Do you think Bond will mean something to your children and their generation?

If you understand children like that, I would say that you should have a professorship. I don’t understand kids that well. They’re an enigma to me, and if they do get something out of these movies in the future, then that’s their journey, not mine.

Do you have any involvement in the search for whoever your successor will be?

You prefer it that way, or it’s just how things are?

It’s really nothing to do with me. Whoever does it, good luck to them. I hope they have just as great a time as I’ve had and they carry on making interesting, relevant movies.

As you were saying goodbye to Bond, you found success with the role of Benoit Blanc, and Knives Out is becoming a franchise of its own. Do you feel at all like Michael Corleone in The Godfather: Part III — “Just when I thought I was out, they pull me back in”?

Listen, write that if you want to. (Laughs) I mean, how lucky am I? I’ve got the chance to work with Rian Johnson on something that’s incredibly fulfilling and fun.

There was a playful elusiveness and a comfort that Benoit Blanc had about him, almost in deliberate contrast to Bond’s rigidity. Did you feel like that role gave a much longer leash to play on?

It’s just the nature of the part, though. Bond is what he is, and Benoit is very different. Not to be blunt, but as an actor, that’s my job, play parts that are different. I got the script for that, and I was like, really? It’s amazing, as it was when I got Casino Royale.

You’re returning to Broadway next year to star in Macbeth. What got you interested in that particular play?

It’s the only other Shakespeare play I’ve read. (Laughs) No, it’s always been one of my favourites. It’s very difficult. It’s fast-paced and not particularly long. There’s an opportunity to do something. Broadway has taken such a kicking, like every other industry, and to do something spectacular and magical and weird, to try to get that on Broadway and help out and give it as much of a boost as possible — I know we can do a wonderful production. There will be plenty of things going on, on Broadway next year, and I wanted to join in.

How does one prepare to play Macbeth?

You learn the lines. We’ve got lots and lots of ideas, all of which are just in the conversation stage right now. We workshop the play for two weeks in November and then we’ll start rehearsals in the new year. Hopefully in those two weeks we’ll nail some of these ideas down. And then you just go from there. Thank God we’ve got Sam Gold and Ruth.

There is also a new film version of Macbeth, starring Denzel Washington, that will be released at the end of this year. Do you feel any competition with that project?

God forbid I was ever in competition with Denzel Washington. Jesus. I don’t consider myself worthy. That doesn’t come into it. They’re going to be very different, clearly, but I don’t worry about those sorts of things. The more, the better.