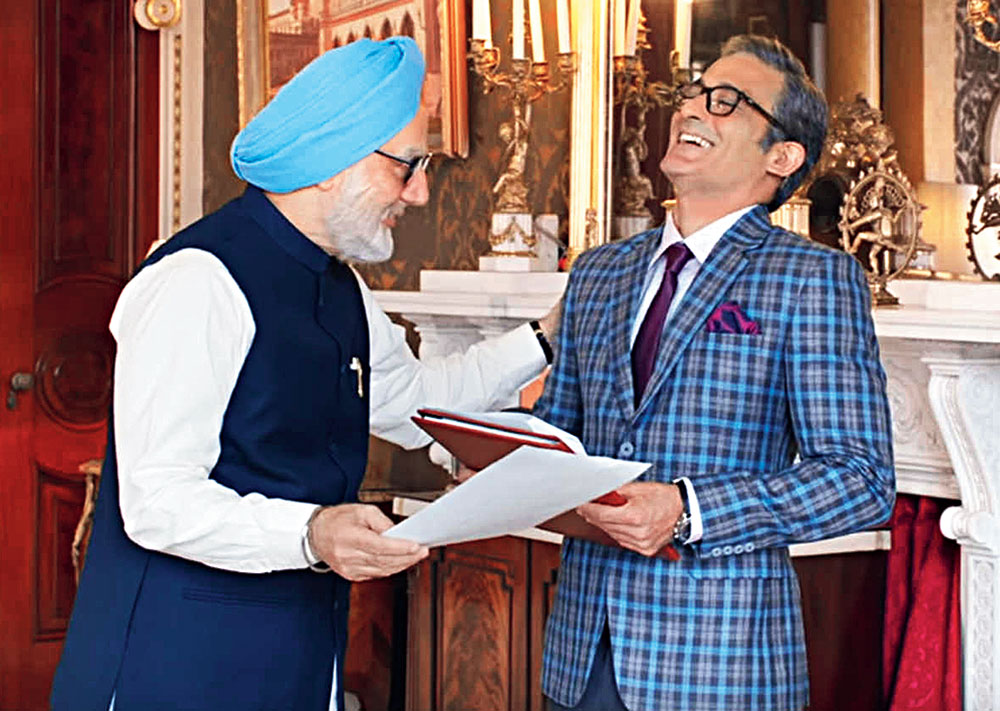 The Accidental Prime Minister is as subtle as a sledgehammer. Actual names are spelt out, real-life political events are over-dramatised and it makes no bones about the fact that it’s a propaganda film driven by an unequivocal agenda.

Described as “a cinematic adaptation and dramatisation” of Sanjaya Baru’s book of the same name, the disclaimer states that the film “is meant solely for entertainment”. But The Accidental Prime Minister — that aims to lift the lid off Manmohan Singh’s growing frustration and helplessness while he was in the prime minister’s chair but was purportedly being controlled by his party’s top brass — is a film with scant regard for the dignity of the man whose story it wants to tell.

Throughout its 110-minute running time, Singh is projected as a squeaky-voiced puppet who is constantly forced to back down after repeated clashes with Sonia Gandhi. He’s made the fall guy for the various scams that rocked the government during his tenure, even as Rahul Gandhi was being groomed to take the party forward.

Some of it may or may not be true, but Anupam Kher plays Singh in such a caricaturish manner — everything from the walk to the voice is exaggerated, but there is no attempt at empathy — that it’s impossible to feel anything for the man. At every point, Singh is referred to as “bada kamzor aadmi” even by his close confidantes and his wife Gursharan Kaur (played by Divya Seth Shah) keeps parroting the line, “Aap kuch kehte kyon nahin?”

To be honest, The Accidental Prime Minister is not even Manmohan Singh’s story. A lot of the focus is on Sanjaya Baru — the former PM’s media adviser and the man behind the tell-all book. Akshaye Khanna, the grey flecks in his hair changing in almost every scene, plays Baru, supposedly the man without whom Singh would be even more toothless.

Akshaye frequently breaks the fourth wall to speak to the viewer — a nod to Kevin Spacey’s Frank Underwood in House of Cards, but without the same impact — and overdoes the smugness. He’s the only actor, though, who seems to be having fun making the film, even though you are frequently tempted to wipe that smirk off his face.

There’s not much of a plot in The Accidental Prime Minister, with most of the scenes looking like they have been hastily strung together. The film opens with the Congress-led UPA winning the 2004 general election. With Sonia Gandhi refusing to be prime minister, party stalwart Manmohan Singh is elevated to the chair. Singh picks Baru to be his key man, but finds himself answerable to Sonia Gandhi at every step. The Gandhis are repeatedly referred to as “The Family” and save for a passing comment that addresses him as a “genius”, no attempt is made to highlight Manmohan Singh’s achievements as an economist and leader.

The Accidental Prime Minister could have been a riveting look at the power centres of Delhi’s political circuit. But what we get is a Bollywood drama that falls short in every department of filmmaking.

The narrative is punctuated with real-life footage, covering everything from election campaigns to political takedowns in Parliament. Some of the footage is shot better than the actual film itself.

Political events play out without any context, with the film probably having worked better as a spoof. Most of the side players look clueless, with the actors playing them having been cast because of their physical resemblance to the people they play. Aahana Kumra gets Priyanka Gandhi’s mop of hair just right, but barely has two scenes, while Arjun Mathur plays Rahul Gandhi as a privileged newbie with little knowledge of politics. At one point, filmmaker Hansal Mehta, who has a head of snow-white hair and serves as a creative producer on this film, makes an appearance as Odisha chief minister Naveen Patnaik. It’s only Suzanne Bernert who doesn’t miss a beat playing Sonia Gandhi.

The Accidental Prime Minister does nothing to disguise its timing and intent, ending with scenes of the current government triumphantly sweeping to power in the 2014 general elections and dropping massive hints as to what one can expect later this year. Yes, very subtle!