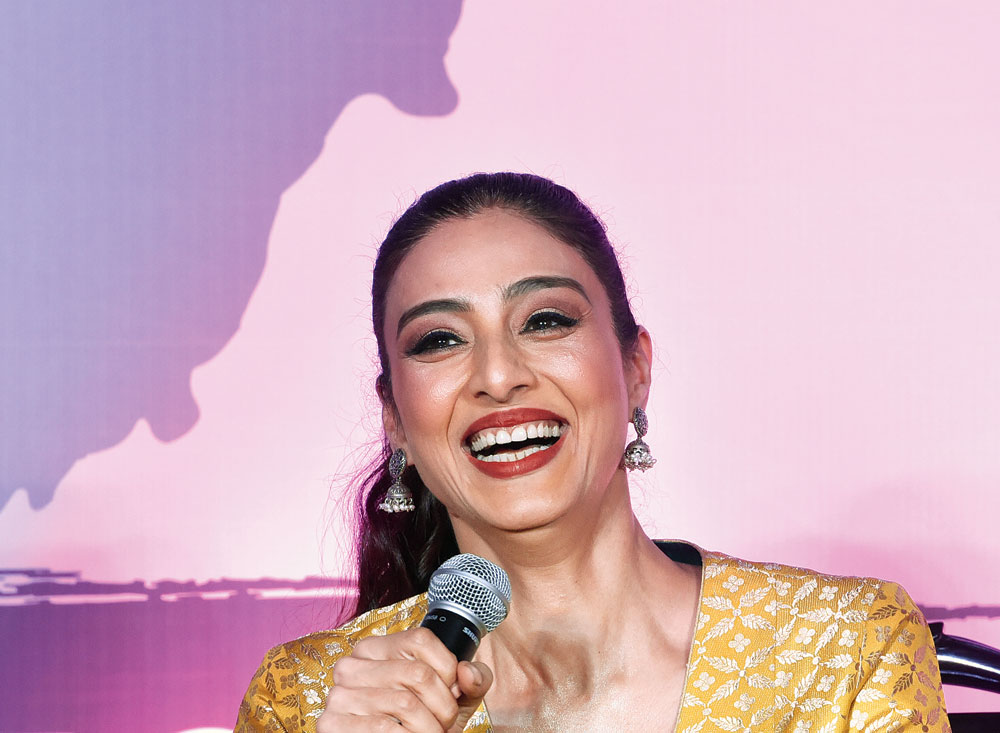 TheFICCI Ladies Organisation (FLO) witnessed a change of guard last month, with Jyoti Jain taking over as the chairperson of the organisation’s Calcutta chapter.

Present on the occasion at Taj Bengal was Bollywood actress Tabu who chatted about her films and favourites. Here are excerpts from the session, moderated by Malavika Banerjee.

The film, which is very aptly named Maachis, ignited your career. How was it working with Gulzar saab at such a young age in a movie with such immense power and depth?

My dream and aspiration was always to work with Gulzar saab. I kept wondering how he had the confidence in me to entrust me with such a role; I just went with what he had written in the script, my belief in him was such and it continues to be very strong. It was a very difficult part. It meant a lot to me personally. I came into my own, in many ways, with Maachis. It’s a matter of pride to be associated with Maachis, it’s a film that accelerated my growth, both personally and professionally. My relationship with Gulzar saab has helped me grow as an actress, a writer and as a person.

While choosing a film, the most important deciding factor is the director. There’s never been any doubt about that. The director and the writer conceive your character and the director will lead you through the film; it’s up to him or her to position your character in the way they think right. For me, it was a joy to work with directors like Mani Ratnam, Gulzar saab, Mira Nair, J.P. Dutta, Rajiv Menon, Santosh Sivan — who was a DoP (director of photography) at that time. All these people formed a very strong foundation for my career. They helped me discover my abilities. My education has been through my directors, like

K. Raghavendra Rao directed me in my first Telugu film, Coolie No. 1, when I was 18. I have fabulous working relationships with all my directors, especially Vishal (Bhardwaj).

I have always enjoyed doing comedy and I think everyone enjoys watching comedy. Angoor, the old Gol Maal, Khoobsurat, Jaane Bhi Do Yaaro… are films I grew up watching and laughed my head off. I have a family that’s blessed with a terrific sense of humour. I am someone who can’t survive without humour in my life. I have friends who have a great sense of humour… I can’t make friends with people who don’t have a sense of humour. I look at humour as an important aspect of anybody’s life, especially mine. So I even enjoy doing an Andhadhun that is dark, but also funny.

We know that you write. How does writing help you find your voice and your equilibrium?

For me, writing is a form of self-expression. Of course, talking to my friends and completely wasting their time is my best form of self-expression! (Laughs) When they don’t pick up my phone then I start writing. But yes, writing has been my constant companion and a very good friend. It’s Gulzar saab who always encouraged me to write… he would give me new copies to write on. He would ask me after a few months, ‘Copy bhar gayi?’ And when I would say ‘no’, he would be like, ‘Achha, bhar jaaye toh padh ke suna na’. Whenever I wrote something I thought was good enough to be read to him, I would go to him and he would have this really appreciative smile. And I would think, ‘Ab toh main bann gayi Shakespeare!’ (Laughs) He was my barometer. It was because of him that I took my writing seriously.

I hope I can do more with my writing and bring it out into the world. But there’s still little more time for that. I write when I am inspired, when I am moved by something or when I want to have fun or make fun of something or someone… privately!