Tanhaji wows with CGI but fails to engross

Tanhaji: The Unsung Warrior is a tale of a clash between two trusted aides of both sides over the fort of Kondhana 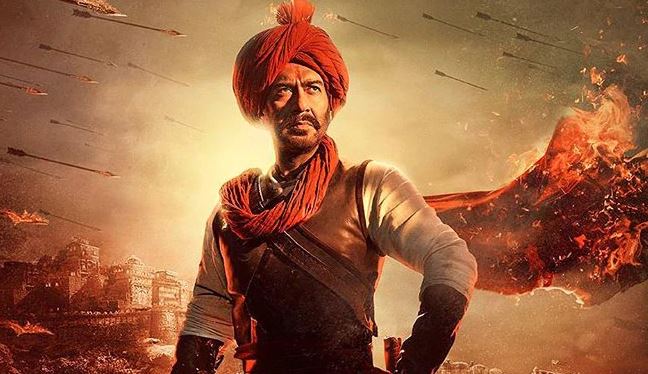 There have been period dramas of greater grandeur and storytelling before but there hasn’t been one about an old Indian subedar in such beautiful 3D graphics.
Ajay Devgan's Instagram page
Shrestha Saha   |   Calcutta   |   Published 10.01.20, 03:31 PM

It’s the 1660s and Chhatrapati Shivaji (Sharad Kelkar) is revered and loved by lakhs in India for upholding the ‘swaraj’ flag aloft in his heart and on his land, south of the country. This is while Aurangzeb (Luke Kenny) consolidates his position in the north and dreams of conquering the entire Indian subcontinent. Tanhaji: The Unsung Warrior is a tale of a clash between two trusted aides of both sides over the fort of Kondhana — Shivaji’s friend and adept warrior Tanhaji Malusare (Ajay Devgn) and Aurangzeb’s ruthless and vile Rajput soldier Udaybhan Rathode (Saif Ali Khan). Fictionalising an episode, chapter or character in history has been done before, over and over again, with the same tropes, and director Om Raut is no rule-breaker in this mix. However, it is the computer graphics in 3D that take the cake in this film that is otherwise so slow that time seems to have stopped even before you are halfway through, and definitely not in a good way.

Shivaji surrenders 23 forts to Aurangzeb, of which Kondhana is one that is of most strategic significance. Four years later, it is time for him to lay claim to this fort and avenge his mother’s insult as Rajmata Jijabai had been compelled to walk out barefoot, mid-puja, as the Mughals came calling. However, he is not keen to involve his most skilled warrior, Tanhaji, in the plan as it is his son’s wedding — an event that doesn’t warrant disruption, despite the child being five years of age. (The filmmakers apologise for such details right at the beginning of the film to avoid incurring any wrath in such turbulent times). While all is merry in the Malusare household, which consists of Tanhaji, his wife Savitribai (Kajol) and son, the news reaches Tanhaji who demands a pause to his son’s wedding to fight this war as, ‘swaraj’ trumps son, any day.

Except for the few scenes where Luke Kenny’s Aurangzeb is seen consulting his aides about the south and few more where Saif’s Udaybhan’s ferocity is established, there isn’t a single moment when the frame doesn’t have Ajay Devgn’s face. Thus, Kajol’s effortless performance of a stay-at-home wife praying for her husband’s well-being is hardly noticeable.

Tanhaji attaches himself to ropes and attacks enemies from the top, wields the sword and the shield with great expertise, and strategises war in a way that would put Chanakya to shame. However, it is his over-the-top ways albeit borne out of creative liberties taken by writers and the director that make the character annoying. The frequent usage of Marathi language with complicated Hindi is quite befuddling and the audience is left to hunt for keywords to grasp the slow narrative. His reverence towards Shivaji and ‘swaraj’ when coupled with the slow pace, takes monumental and unnecessary proportions.

Saif Ali Khan is great and looks like he missed acting all those years in between, when he was on a break. For he has come back to the large screen with great fervour and enthusiasm, which makes Udaybhan’s wretchedness a treat to watch. However, it is extremely disappointing that Indian filmmakers fail to think beyond the set tropes of establishing a Mughal or Afghan identity. Eating meat with vengeance, check; dressed in dark green or blue, check; laughing maniacally for no apparent reason, check; lusting after innocent and forbidden women, check! Are we talking about Ranveer Singh’s Khilji or Saif’s Udaybhan is only anyone’s guess. It’s almost imperative for an innocent Rajput boy jilted in love to go from donning serene white to dark blue overnight to show his change of heart. Tsk tsk! The costumes are predictable and unimaginative with reds and whites on the ‘good’ side and green on the ‘bad’ side. Kajol seems to be ageing like fine wine, looking resplendent in her red finery.

The concluding fight sequence leaves room for growth for the choreographer despite being filled with anti-gravity pull-ups and scaling of walls with bamboo sticks. A very Lakshya-esque war strategy and mountain-climbing (fort walls in this case) mark the beginning of the end of the film.

There have been period dramas of greater grandeur and storytelling before but there hasn’t been one about an old Indian subedar in such beautiful 3D graphics. Bound to tickle the imagination of a ’90s dad who lived to watch the fight sequences of old Bollywood treasures, I’d suggest this film be ventured with a large group of friends who one can chat and while away time during the slow-paced sections of overflowing emotions.