Stylefile 2017, with t2, got off to a flying start at a new venue — Quest mall’s rooftop. Snapshots from the day-long lifestyle do 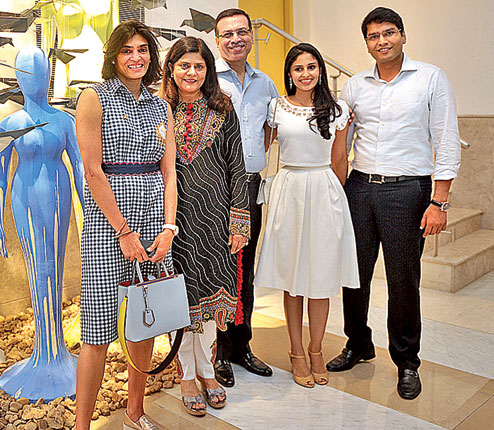 (L-R) Sumedha Saraogi, Preeti Goenka, Sanjiv Goenka, Shivika Goenka and Shashwat Goenka played perfect hosts at Stylefile 2017, held in association with t2 on February 10. The venue — the Quest mall rooftop — was a departure from the regular Old Bungalow on Burdwan Road in Alipore. “Looking very good,” smiled Sanjiv. “I think the shoppers are enjoying the new venue. Also, the footfall seems to be good,” said Preeti.

Sumedha, who is a Stylefile co-founder and co-organiser along with Preeti, picked the art space, and stalls by Isharya, Pratima Pandey and RARA AVIS as her fave corners. “It’s easy and fun clothing,” she smiled. When t2 caught up with her she hadn’t yet seen her daughter-in-law Natisha Saraogi’s Natty MRKT, an offline pop-up version of Natty, an e-commerce marketplace. “My daughter-in-law has hidden it from me because I am an incessant shopper. She is saying ‘let it sell, first!’” laughed Sumedha.

White canopies. Open air. A carpet of grass welcoming you in.... Old Bungalow on Burdwan Road? Nopes! Quest mall rooftop it was, which hosted the spring-summer special edition of Stylefile 2017.

The three zones of this season’s Stylefile on the rooftop of Quest mall took me through a maze of fashion, design and art. First up, a rooftop fashionista affair, with tropical house beats, soft turf and all-white fabric stalls that felt more like an exhibition straight out of Milan.

I fell in love with Namrata Joshipura’s designs, where the eveningwear beading was subtle, the cuts were divine and the daytime peplums and pastels, to die for.

After jostling through refined fashion pros and regular mall-goers alike, I hit the accessories zone where hipster classics like succulents in rustic pots and hexagonal wine racks from Natty MRKT rubbed shoulders with the opulence of Isharya jewels.
The best thing about this zone? The cityscape that surrounded it. Under a haze of afternoon sunshine, the city buzzed frantically beneath the lacquered store-front, where people were sipping tea and chatting.

The third zone was across from the frenzy of the rooftop, in a cool, high-ceilinged room with swing and jazz standards bopping in the background. It housed various artists, and a few designers, and it was my favourite part.

I talked to Aradhana Dalmia about her Luminous collection and her debut at Stylefile. She wore a similarly luminous body-con and spilled over with excitement, not just about her own work but about the artists around her, in particular her first cousin Avantika Saraogi, whose image series Aurus hung just alongside.

The two collections couldn’t have been more different. Aradhana’s neon oil paintings were fun, young and full of energy, whilst Avantika’s exploration of strength and muscular form was more refined and exceptionally well put-together.

The standout collection for me, though, was ‘Made for each other’ by Deepjyoti Kalita, where he took a series of everyday items and doubled an aspect of them. The double filter-ended cigarette, the two-headed toothbrush: mature, witty and thought-provoking.

Stylefile opened my eyes to so many new concepts, like the beauty of raw clay as explained by Shweta Mansingka, or the finesse that can be brought to hyper-femininity by Archana Rao. I’d recommend Stylefile to anyone who’s curious about beauty, workmanship or innovation.