Steve Backshall on filming the world's most dangerous animals

The naturalist and explorer engages in a candid chat about his iconic series Deadly 60, and more 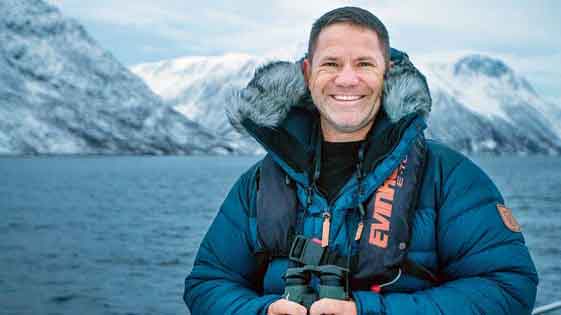 A BAFTA-winning naturalist, explorer, writer and television presenter, Steve Backshall is the face of Deadly 60, a BBC series that sees the 47-year-old and his team embark on expeditions to film the “most deadly” animal species on the planet. With Deadly Pole to Pole Season I airing on January 25 at 9 am on Sony BBC Earth, we chatted with Backshall — who has also authored both fiction and non-fiction books — on what enthralls him about being out in the wild.

What do you think contributes to the enduring appeal of the Deadly 60 series?

When I came up with Deadly (60), it kind of focused on the animals which have universal appeal. Even those who are a lot into animals are wary of the ones which present a danger to us human beings. But my twist has always been to show that these animals may be deadly in their world and to other animals, but not to us as people. I think people do get intrigued and excited by snakes, scorpions and spiders, big cats and sharks, even if these creatures don’t normally float their boat.

This is a show filled with thrilling moments. Can you pick your Top 3 standout moments so far?

In third place, would be the encounter with critically endangered hammerhead sharks in the Bahamas. We had them slide past the camera at top speed, some of them about 5metres in length, taking fish off our fingers. It’s a critically endangered animal and yet we had them literally in our faces during the entire time that we were there. That was really, really special. At number two, I would talk about releasing a turtle that was caught up in plastic fishing wire and would certainly have died if it hadn’t been untangled. Being able to set it free is something I felt absolutely amazing about. The number one would be diving at night underneath the Northern Lights into the Arctic seas along with killer whales and having this giant and sophisticated animal swimming just a metre in front of my face and plucking herring from the sea while the Northern Lights rippled across the sky right above us. That would be my highlight not just for this series, but possibly my whole career.

Do you ever get scared while filming these dangerous creatures?

As a biologist, I have been working with these animals for practically my whole life, and I know that they are far less dangerous to us than we are to them. And even if it is swimming alongside a crocodile or a shark, I know what the signs are, I know what the body language of the animal is, and I know how to interact with it safely.

Despite that, have there been any scary moments?

In the light of all the bad things that we keep hearing and seeing about on our planet in terms of conservation, it still fills me with great joy when I come across these creatures, to still see the very best of what our planet has to offer. To see evidence of the real wonders of the wild world is something that makes me feel very lucky.

Did you have an adventurous childhood and was there a moment of epiphany that made you decide that you wanted to spend your life in the wild and be a naturalist and an explorer?

Yes. I was very lucky. My parents were really into the outdoors, really into nature. And from a very young age I knew that was always going to be the way I spent my life. I am so lucky that I had them as my role models and they leaned me towards this life. In terms of epiphanies, they happened so early on in life that I hardly remember them. My mom and dad tell me stories of how I would go through compost heaps looking for snakes and snake eggs, and trying to find bird’s nests and bird’s eggs, beetles and all these sorts of things. From when I was knee high, these were already a huge part of my life.

You have scaled mountains, slept on the side of cliffs and you were apparently once devoured by a whale. Is it the edginess that’s part and parcel of your life that keeps you going?

I think that the fact that every day is different is endlessly enthusing, it gives you a tremendous amount of constant inspiration. It’s always changing, and no day is ever the same. I am given excitement by every single sunrise, by every animal that I haven’t seen before... it’s such a wonderful, wonderful way to spend my life. I am so lucky that I have this opportunity.

You have also authored many books. Is writing as enthralling as your time out in the wild?

I think creatively it’s more satisfying. I get a huge amount of satisfaction from sitting down and writing out my thoughts, all the experiences that I have had. It’s a great feeling when you get to the end of the day and you hit word count on the laptop and it shows that you have written 3,000-4,000 words. But it’s nothing compared to the moment when a book that you have written turns up in the post, published and finished. That’s an incomparable moment.

Has the way you spend time in the wild changed in the post-Covid world?

It has. We are still doing expeditions. I have just got back from an expedition filming sharks off the coast of Costa Rica. Before that I was in Kamchatka in Russia. It’s so complex and the logistics now are massive. The pinch point is getting out in the first place. Once you are out, then you are in small teams with each member undergoing a test and you then form your own bubble on location and it’s all fine. But the business of planning and preparing and getting out on an expedition has completely changed in a way that is definitely not sustainable in the long term.

Is the world out there different as well?

It is. Here in the UK, during lockdown, there were quite significant changes to the air quality and to the water quality in lakes and rivers because of lack of human traffic. It didn’t take long for that to be overwhelmed when the first lockdown ended. But the enduring thing is that people who had limited themselves to an hour of exercise in a day suddenly started discovering nature and a fascination for nature that they may not have had before.

What would your advice be to a young person who has a passion for nature but doesn’t know how to go about the whole business of becoming a naturalist and explorer?

More than ever, now is the era of young people to be at the absolute forefront of adventure and of conservation. I think we will look back on this time in history as being, alongside some of the most important civil rights movements in the past, as a time for young people who are standing up and saying that they do not accept our planet’s problems and that they want to be a part of the solution. I am overwhelmed and so proud and so inspired to see so many young people engaging with our planet’s problems in ways that I would have never ever imagined. There are huge challenges for our planet right now, but I believe in our young people and I believe each and everyone of them can make a difference.