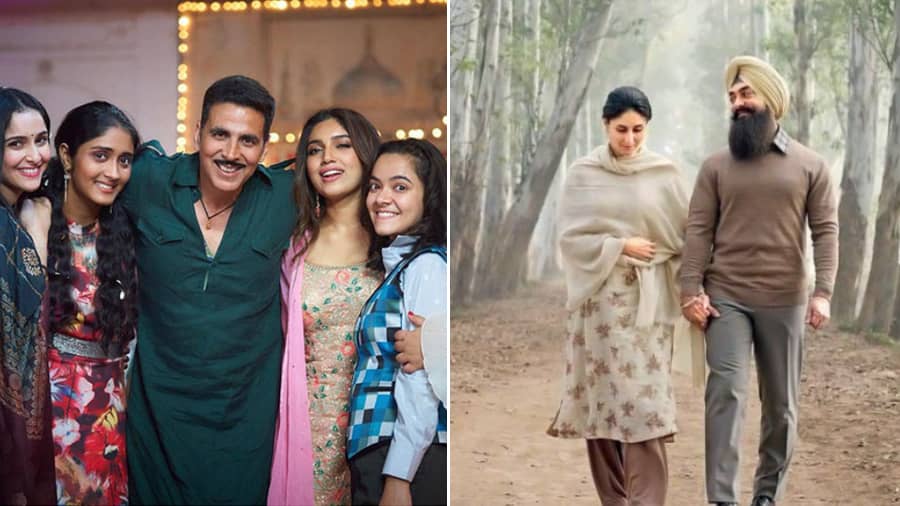 Released on Thursday, both the much-anticipated films received mixed to negative reviews amid boycott calls on social media.

On the first day, Aanand L Rai-directed Raksha Bandhan raised Rs 8.20 crore at the domestic box office, which dropped to Rs 6.40 crore on Friday. Aamir's Laal Singh Chaddha had a comparatively better opening with Rs 12 crore, but the film also registered a dip on day two with earnings reported to be around Rs 7 crore.

“We all think that films of superstars like Aamir and Akshay should do better but these are turbulent times for box office. There is not enough equilibrium in the consumption patterns of audience, it is haphazard,” he said.

“These guys have the potential to open with big numbers but we haven't seen such strange figures come out for them in a long time. They are dismally low,” Rathi told PTI.

In his theatres, Rathi said Laal Singh Chaddha opened at about 25 per cent and Raksha Bandhan at 15 to 20 per cent occupancy.

Directed by Advait Chandan, Laal Singh Chaddha is the official remake of the Tom Hanks-starrer Forrest Gump (1994), and follows the titular character's journey and how he overcomes many challenges of life, which coincides with the many iconic events from the Indian history.

Raksha Bandhan is a story about Lala Kedarnath (Akshay) and his relationship with his four sisters. It focuses on his efforts to get his sisters married and tackles issues such as dowry and body shaming.

Reportedly, Laal Singh Chaddha released in 3,500 screens across the country and Raksha Bandhan opened in 2,500 screens.

Rajasthan-based distributor Raj Bansal of Entertainment Paradise, a multiplex chain in Jaipur, said the response has been below expectations and the numbers might drop further.

“Raksha Bandhan being a big holiday we had some expectations but the opening for both the films has been low. Besides, there is a negativity for Hindi cinema but if a film is good then the negativity doesn't matter. We were hoping Laal Singh Chaddha would open at Rs 17-18 crore and Raksha Bandhan at Rs 10-12 crore but the numbers are less,” Bansal said.

“We have low ticket rates such as Rs 130 for stall and Rs 160 balcony but still the shows are not housefull. People are saying 'Laal Singh Chaddha' is lengthy and slow while with Raksha Bandhan' people think the film did not justify the theme,” Desai said.

Laal Singh Chaddha and Raksha Bandhan join the list of recent star-led Hindi movies such as Shamshera (Ranbir Kapoor), Jayeshbhai Jordaar (Ranveer Singh), and Runway 34 (Ajay Devgn) that have had a dull run at the box office.

Alia Bhatt's Gangubai Kathiawadi and Kartik Aaryan-starrer Bhool Bhulaiyaa 2 were the only Bollywood films to cross the Rs 100 crore mark.

Bansal said 2022 is turning out to be the worst year of Hindi cinema .

It is a year where every actor's film has had the worst collection like Ranveer Singh, Ranbir Kapoor, Taapsee Pannu, Akshay Kumar, Aamir Khan, Tiger Shroff, he added.

The reason for poor performance of Hindi films is the lack of good content, according to Rajender Singh Jyala, Chief Programming Officer at INOX Leisure.

Trade analyst Amod Mehra believes easy access to movies on digital platforms, soon after their theatrical run, is another reason for less footfall in cinemas.

“The collections are lower than yesterday. People are not interested in seeing the films. It is because of the easy availability of films on OTT. Cinegoers between the age of 15 to 35 years are not coming to theatres,” Mehra told PTI.

Rathi believes Hindi cinema has become “elitist and too urban”. The filmmakers, he said, need to take stock of the situation.

“Hindi films have alienated themselves from ground level audiences. The storytelling style or the milieu, alienates a huge chunk of common people of India. Our cinema has become elitist and too urban to connect with audiences at large. Whereas south films are accessible to common people,” he added.