Soha Ali Khan celebrating Ganesh Chaturthi to Swastika Mukherjee’s upcoming movie: Check out what celebs have been posting on Instagram 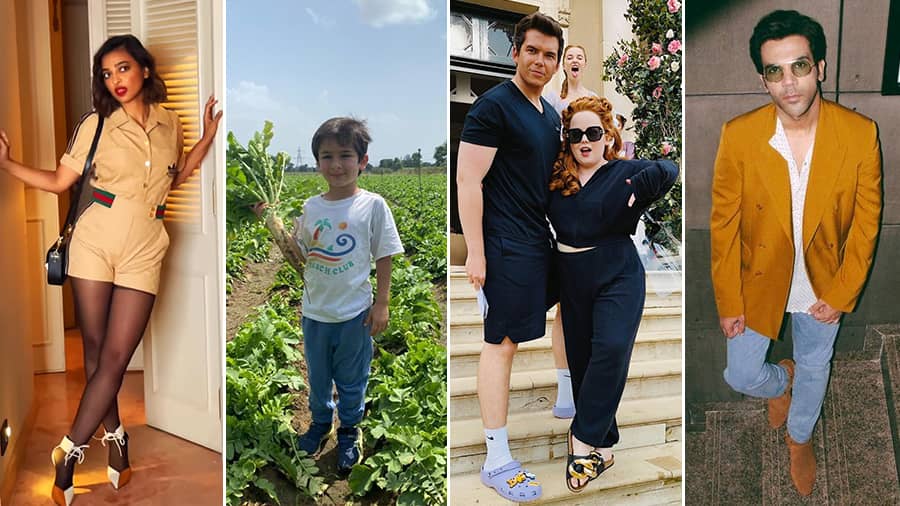 Radhika Apte looks stunning in a khaki jumpsuit in behind-the-scenes clips from her shoot for the upcoming Netflix release, Monica, O My Darling, an upcoming Hindi neo-noir crime comedy film written and directed by Vasan Bala and produced by Sanjay Routray and Sarita Patil under the banner Matchbox Shots.

Filming has begun for Season 3 of popular Netflix show Bridgerton, and we can’t get enough of these behind-the-scenes pictures of Nicola Coughlan as Penelope Featherington and Luke Newton as Colin Bridgerton. Did you spot Daphne (Phoebe Dynevor) sticking her tongue out at the back?

Looks like our very own Draco Malfoy, from the Harry Potter series, who is just as excited about ‘Back to Hogwarts’ as we are. Tom Felton shared an adorable throwback picture of him as a baby holding a wand.

Kareena Kapoor Khan clicks this memorable picture as Taimur picks out radishes for some piping hot Muli Ke Parathe with ghee for lunch.

Soha Ali Khan and Kunal Kemmu celebrated Ganesh Chaturthi with their daughter Inaaya Naumi Kemmu. Kunal is seen teaching his daughter to ring the ceremonial bell with her right hand instead of her left.

Bedhadak actress Shanaya Kapoor shared pictures of herself and her family from their vacation at Amritsar. Her mother Maheep Kapoor also shared a throwback picture of Shanaya with her younger brother Jahaan Kapoor.

Rajkummar’s birthday was made extra special with his wife Patralekha’s birthday wish for him.

Swastika Mukherjee shared a video of herself and her co-stars from her upcoming Netflix release Qala. Irrfan Khan’s son Babil, who will be making his acting debut with this film, quips, “Everyone except me has spoken about themselves”.