Selfie sticks have come ‘Fromm’ him! 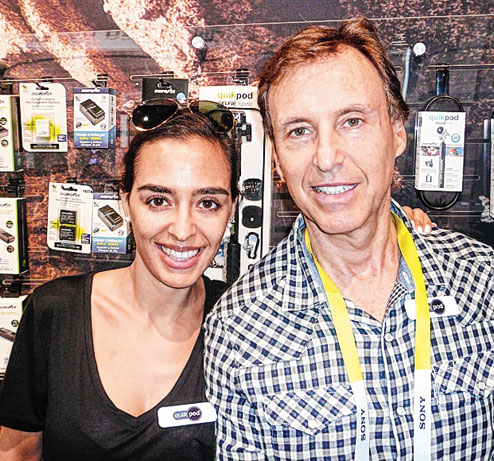 Wayne with his daughter Sage, the brains behind Fromm Works Inc

Ellen DeGeneres’s epic Oscar selfie was forwarded over2 million times on Twitter by the time the 2014 ceremony was over. And yet, Ellen wanted more: “If only Bradley’s arm was longer.” Yes, had it been longer — or had it come with a selfie stick — Angelina Jolie’s face would have been fully visible!
Bradley’s arm hasn’t grown longer since but the selfie stick sure has come a long way and can be seen everywhere –– New York to Calcutta. But how often do you say “Thank you Wayne Fromm” while using the stick?

Back in 2006, the 60-year-old Toronto-born didn’t know the impact his invention would have. He calls it the Quik Pod and we call it a selfie stick. Every time he is introduced as the inventor of what has become the device of 2014-15, “people are impressed,” he told t2 over email.
Here’s more from Wayne Fromm, president of Fromm Works Inc., which he runs with his daughter, Sage.

It was my work, solely, that is responsible for today’s craze. I worked for 10 years... it took a long time for the fire to light. I never gave up, this is what made the difference. The Quik Pod was the first selfie pole for smartphones and digital cameras
–– Wayne Fromm

What’s the story behind the selfie stick or rather Quik Pod?
Goes back to 2002 when I was first inspired to create the invention. Mine was, and still is, far more sophisticated than what is commonly used today. My mandate was to create a lightweight device that would work with all types of cameras, would never break and could be taken in saltwater by divers capturing images of coral and sea life.

Alexander Remnev took this selfie after scaling the 1,350ft Princess Tower in Dubai in August 2014

What did the early version of Quik Pod look like?
I made prototypes out of aluminium, titanium, polycarbonate, and carbon fibre. Every possible design was explored to have the rods open and close easily while not rotating. They had to lock in place as well for overhead shots using heavy cameras.

The Quik Pod relied on the camera’s timer and not on Bluetooth. Do you think the device would have been more popular had it been invented more recently, say 2012?
I showed a wireless version at a photo trade show in 2007. It took a long time for this invention to reach critical mass. If it was not invented until 2012 the world would not have had my professional line of selfie sticks. It took many years of feedback from customers to perfect ones that can withstand the Arctic weather to the Dead Sea to the Sahara desert.

People have been sticking cameras on poles for long now. Does that make it difficult to call yourself the inventor of the selfie stick?
People were placing cameras on tripods and monopods holding the thin leg of the tripod for overhead shots. I reversed the design and placed the camera on the thin end and created a solid grip handle at the other end. My device was designed to work with cameras ranging from DSLR all the way down to the early mobile phones, this was quite a challenge.
It was my work, solely, that is responsible for today’s craze. I worked for 10 years doing demonstrations around the world, it took a long time for the fire to light. I never gave up, this is what made the difference. My own photo appears on counterfeit products, all roads point back to the overseas factories stealing my inspiration and hard work. Quik Pod is successful, sold in 40 countries, but it is not my goal to put my name on cheap quality products. Yes, this is an invention, it carries a US patent and is a better mousetrap, so to speak. The Quik Pod was the first selfie pole for smartphones and digital cameras.

Singer P. Diddy’s selfie on his $72 million yacht in December

There have been reports about how selfies revolve around self-obsession. What’s your take on it?
My only goal was to create a device that would allow the photographer to be included in the photo, the parents with children, for example, or friends travelling together.

What are some of the products you are currently working on?
Many, some for extreme sports enthusiasts and others are toys for children. I have a strong history in creating toys for Disney, Crayola and other top companies.

What prompted you to become an entrepreneur?
I have always been an entrepreneur, never had a job in my life as I always created my own businesses. At the age of nine I used to perform magic tricks at children’s birthday parties. At 14, I was importing craft items and converting them to jewellery. In my teens, I operated a movie cinema while in university. In my 20s, I was in the coin-operated amusement machine industry, video and carnival games.

Is this the first SS? A grainy 1926 black-and-white photograph of Arnold and Helen Hogg, taken on the Warwickshire street where they lived, appeared in December. Arnold’s grandson Alan Cleaver told The Guardian: “This photo has always been a family favourite. Arnold Hogg, my grandad, was a very funny guy and it just seemed to sum up his humour. He died in 1972 when I was a teenager so I knew him for a few years. He was always a great pianist, played in pubs and other places, so yes, a born entertainer. He’d have loved all the fuss around this picture.”

How does one take the selfie to a new level after the selfie stick?
I have a follow-up that will change photography, watch for it next year.

Finally, how does one take the perfect selfie?
Keep the arm holding the selfie stick in a nice relaxed position with a bend in the elbow.

Fromm snapshots
Founder: Wayne Fromm, 60
Co-creator: Daughter Sage Fromm, 27
From: Toronto
The Quik Pod: It’s the world’s “first hand-held telescopic monopod/tripod”, which he invented in 2004 but was made available in 2006
Other creations from Fromm: Disney’s Beauty and the Beast Magic Talking Mirror, Disney’s Aladdin Magic Lamp, Crayola’s Colour and Show Projector, Saban’s Power Ranger Room Defender and Nestle’s Nesquik Magic Milkshake Maker
Degree: He attended the University of Toronto from 1972 to 1973 and studied commerce and finance. He received a Bachelor of Arts in Psychology at York University in 1975

Mathures Paul
Have you clicked a picture using a selfie stick? Share it at t2@abp.in