Saptaswa Basu on his debut film

While designing the revenge in ‘Network’, I used TV screens as a weapon, not guns’ — a post-mortem chat with director 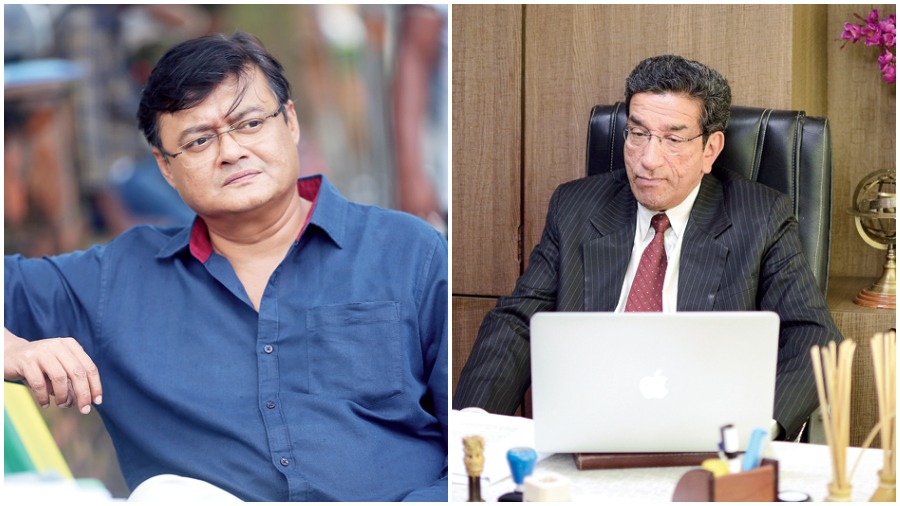 Saswata Chatterjee and Sabyasachi Chakrabarty in the revenge thriller Network, streaming now on SVF Movies on YouTube
Sourced by the correspondent
Arindam Chatterjee   |   Published 07.04.21, 12:13 AM

I wanted to pay a tribute to films and the TV industry while making my first film. Maybe we film-makers always try to convey our love for the medium when we think of a feature film for the first time,” says director Saptaswa Basu about his debut film Network, which released in 2019. The film is now streaming on SVF Movies on YouTube. A candid chat...

Network tells the story of an ailing, terminal, forgotten, desperate film-maker out to make his final film.

I have always loved dark, broken characters. They generally have a complex psyche and border on criminality; they feel they don’t have anything to lose and that inspires them to attempt something extraordinary. When we wrote the screenplay, we had “nihilism” as our theme, which is “loss of value in the post-modern age”. A character who has failed and is now looked down upon by society tries to redeem his name in his last days — that was the crux of the story. There is nothing ideal about this age. Everything has a shade of grey. Therefore Abhijit Ganguly (Saswata Chatterjee) fails to make his project by honest means and seeks revenge in full force within his counted days.

We have seen a few films of other genres where the protagonists try to balance their life or complete their last wishes after being terminally ill. There is an element of pathos and sympathy in general in those films. However, to build this thriller, I tried to project the willpower of Abhijit Ganguly who literally turns into a strong villain in style and sets up a new show, while fighting his physical limitations. So this character is the pivot of the film that keeps the audience invested.

But why does he set out to make a horror film with a Child’s Play connect as his final film? His film idea is quite hilarious.

Well, Abhijit Ganguly has been shown as a commercial director with average aesthetic sense who is apparently obsolete now, whose ideas lack sophistication and is not appreciated by the current generation. Even his colleagues deny meeting him. I have kept a certain angle of satire and fun in establishing those parts. So when he plans a new film, he does not break his character completely... rather attempts a horror movie full of masala. The question is asked in the film by his friend Subrata (Bhaskar Banerjee) who clearly tells him his film story does not sound relevant. Yet Abhijit Ganguly, being obsessed with his story of the “Elevator Ritual” —which actually exists and many people attempt — goes ahead to make his film Sandhan. His ideas may seem a bit off or comedic to the audience and that was intended. I never showed him making something brilliant or too unique. That kept the journey of Abhijit as a person and him as a director separate.

A special scene is the moment when Abhijit first gets the news about his condition from the doctor. How did you set up that scene?

The scene was shot in an actual medical facility and the doctor is played by a real doctor, Dr. Kaushik Chakraborty, who is a family friend and has always supported me in giving medical insights and realistic premise in both Network and Pratidwandi. The scene was brought in with a sudden-ness to make the impact strong, as life and death are balanced by a thin line and everything can get topsy turvy in a moment. The doctor played it in a cold and clinical manner while Saswatada’s blank reaction sealed the scene. We avoided any sort of build-up or melodrama as this scene triggers multiple sets of events just like butterfly effect and therefore has a brooding sense of calm about itself.

What were the main challenges of the shoot? How long did it take to do the pre-production?

Scheduling and budgeting were the main challenges. I acquired funds, shot for a week, then again waited for two months to do the next schedule. This went on for a year. The pre-production went on for two years and we faced endless delays, which we utilised to make the preparations well. My college friends, colleagues, cast and crew tried their best to keep the funding going. We had a number of graphics scenes for which I did basic storyboarding for the second half, which also consumed a bit of time. Overall it felt like an epic examination and it’s alright to face such challenges if one wants to communicate in a public medium and get themselves seen and heard, that too on big screen.

The film tells a thrilling revenge story and takes a moral stand as well. What did you want to convey?

There is a voice-over at the end which goes, “We are all protagonists in our stories but we may end up being antagonists in other people’s stories”. It’s a matter of perspective. From chaos comes order. In this modern competitive age, there is little place in people’s minds to have an ethical standpoint and that is why so many cases of conflict arise. It’s the domination of materialistic pursuit that drives the frenzy today. When Abhijit Ganguly learns about his numbered days and then gets betrayed, he plays God himself just for the sake of it as he has nothing to gain or lose. All these themes are blended in the simple message we wanted to say that fame is dangerous and cannot be handled well by all.

Why clutter the first half with so many songs that distract?

I used music as a means to take the story forward, as with the musical part there are montage scenes mainly where I use jump cuts or time lapse to give certain information. The song by Shaan is a part of Abhijit Ganguly’s film Sandhan, through which I show in time lapse that he is finally starting what he wanted to do. When the second half starts off with the TV show, I did not use any further music as the episodes were important at that point to keep things engaging.

Also, some of your casting choices could have been better.

In both my films, beside stalwart actors like Apuda (Saswata Chatterjee), Sabyasachida (Chakrabarty), Bhaskarda etc there have been many newer faces. I love to collab and work with new people and I try to hold auditions and look test for the same. If some of them do not get a first chance there will be no possibility for them to grow, learn or correct their craft. I believe in that as I myself have never got an easy way or so-called chance to do a work.

Of course some of the supporting cast could have been better, the production design can be more sleek with a higher budget. The room for improvement is there and we only tried to give an effort with whatever we had in hand and whoever came forward to support a new production house.

The film pays tribute to The Truman Show. Why?

The Truman Show is a great film, very close to my heart. In fact, it triggered a sense of phobia among large sections of people who started to believe that their whole life is a TV show. I feel Peter Weir’s work is underrated. I have always looked up to Weir as an inspiration and his film is as relevant today as it was back then. Certain films stand the test of time. So while designing the revenge, I used TV screens as a weapon, not guns. These little screens, even mobile screens, have become dangerous nowadays as we see mass hysteria happening from a simple fake news. This is something I wanted to address in my film and therefore paid a tribute to Weir’s film.

Network gets weighed down at times by its Hollywood influences. Why get into that zone?

While designing a story which can happen at any part of the world, I wanted to make something that any audience could relate to. Not restricted to a sentiment of a particular region. Besides paying tribute to the Weir film, I did not use any Holly influence intentionally but I connect with certain film-makers from the West deeply, such as Fincher, Kubrick, Nolan and others and their depiction of suspense and revenge has attracted me. So the stylisation may feel like Hollywood but it was not intended. On the other hand, a number of people kept hinting at similarity with Table Number 21, which we did not refer to at all! But after watching it in full people appreciated the core material, which is original. It was a challenge really as people these days, especially on social media, keep digging and digging to find something and prove that something is copied. I am loving and learning from all the comments that I am getting now as well as it’s good to see it has crossed 2.5 lakh views on SVF Movies.

How was it like directing Saswata Chatterjee and Sabyasachi Chakrabarty in your first film?

I have worked with Saswatada in my college days in short films and my equation with him has always been great. I was naturally a bit tensed to direct both Saswatada and Sabyasachida together in a scene as one has to be very prepared in dealing with these two actors who are completely dedicated to their art. Sabyasachida asked me few questions regarding lensing and the kind of framing I was using in various scenarios and it showed how much in-depth knowledge they have about the complete process. They are the people who inspire one to work hard and not take superficial steps or short cuts. It’s the most memorable part of my film-making journey to direct these two in my first film, along with other great and experienced actors like Bhaskar Banerjee, Saptarshida (Ray), Barunda (Chakraborty), Saayoni (Ghosh) and others.