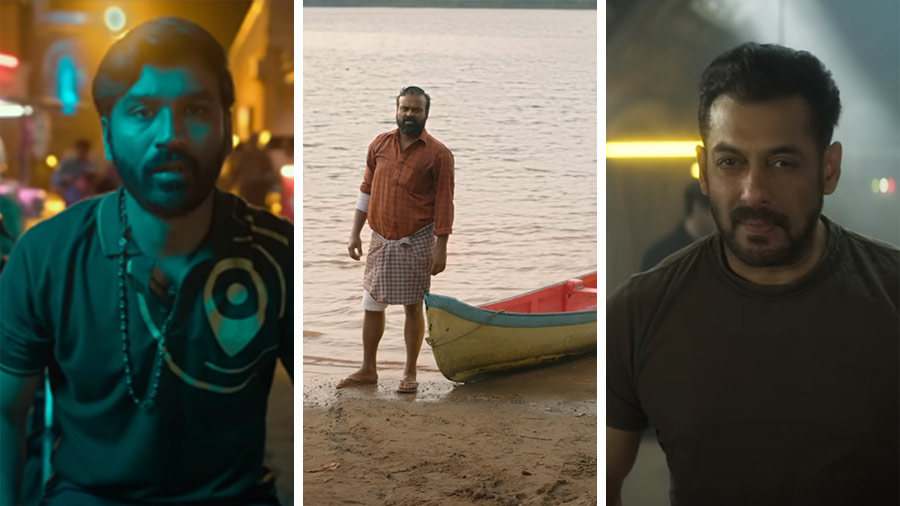 Yash Raj Films on Monday released a teaser of the third instalment of Salman Khan and Katrina Kaif’s spy action franchise, Tiger. The film will hit theatres on April 23, 2023, the production house announced.

“TIGER - Always READY! In cinemas on Eid 2023. Releasing in Hindi, Tamil and Telugu. Celebrate #Tiger3 with #YRF50 only at a big screen near you on 21st April 2023,” a tweet from the official handle of Yash Raj Films read.

“Tiger always ready,” says Salman Khan after Katrina’s character asks him whether he’s ready or not in a short video shared by Yash Raj Films .

Tiger 3 will mark the return of Salman Khan and Katrina Kaif as an on-screen couple after 2017’s EK Tha Tiger. The upcoming film is directed by Maneesh Sharma.

Sun TV has released the trailer of Dhanush’s upcoming film Thiruchitrambalam, billed as a heartwarming comedy-drama.

Directed by Mithran R Jawahar, the film marks the fourth collaboration of the actor-director duo, who have previously worked together in Yaaradi Nee Mohini, Kutty and Uthamaputhiran.

The trailer of the film shows Dhanush as a love-sick boy, who works as a food delivery executive and lives with his grandfather with whom he shares his first name. Dhanush’s character has a difficult relationship with his father, a cop.

Thiruchitrambalam will be released in theatres on August 18.

Produced by Santhosh T. Kuruvilla, the film is directed by Ratheesh Balakrishnan Poduval, who previously helmed Android Kunjappan Ver 5.25 and Kanakam Kaamini Kalaham. The trailer of Nna Thaan Case Kodu gives us a glimpse of a legal case by a common man against a powerful minister. From the trailer, it seems that the film will be a social commentary which will explore the hardships of a common man.

Nna Thaan Case Kodu will arrive in theatres on August 11.