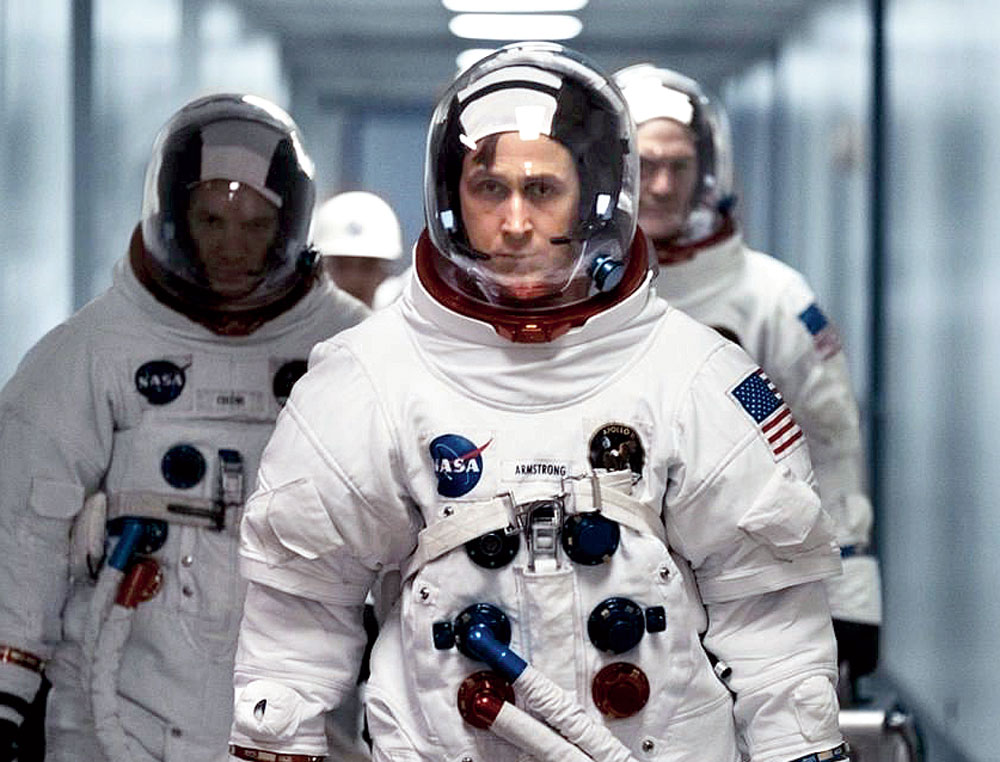 It was the story of any given afternoon in Hollywood: a pair of experienced producers meets a sizzling young director over a concertedly casual lunch.

The producers, emissaries from a major studio, initiate ritual courtship — brandishing the keys to a virtual village of filmable, prefab intellectual property. The director need only take his pick from the lot.

It was 2014, and the director, Damien Chazelle, had recently debuted his second film, Whiplash, which was nominated for five Academy Awards and won three. He listened politely as the producers, Wyck Godfrey and Isaac Klausner, eventually pitched what would become his unlikely new film — First Man, an adaptation of James R. Hansen’s definitive 2005 Neil Armstrong biography of the same name.

Chazelle was initially sceptical; previous efforts to bring the first man on the moon to the multiplex had sputtered over the years, and the director hadn’t thought much about the pioneering American astronaut since elementary school. But the idea planted a seed in the back of his mind. Its fruit, starring Ryan Gosling (reuniting with Chazelle after La La Land) and Claire Foy (The Crown) as Mr. and Mrs. Moon Landing, will debut on October 12.

The three are in some ways a crew of misfits. For one thing, neither Gosling nor Foy was actually born in the land of liberty (he’s Canadian, she’s British). And Chazelle’s earlier films have earned him a reputation as a spirited decoder of compulsive artistic genius, not as a caretaker of national mythology.

But First Man, a meditation on collective ambition and individual sacrifice, has more in common with that early work than one might expect.

“Although it’s very different from an artistic achievement, I think the moon landing, for me, has a similar effect, because it’s such a poetic, symbolic moment that we all get to experience,” Chazelle said, joined by Gosling and Foy for a phone interview last month.

“But, of course, the reality is we’re not fully experiencing it — the ways in which so much failure and cost had to precede that success story, the darker underbelly of the mythology,” he continued. “And I think it was learning about that stuff that actually gave me a fuller appreciation of just how insanely brave and courageous they all were.” Here are edited excerpts from the conversation:

Damien, I have to ask: Why outsource these jobs to a Canadian and a Brit?

Damien Chazelle: Wait, they’re Canadian and British?! [More laughter] The short answer is, for reasons that are hard to describe, there almost never was a moment where I didn’t see Ryan in this role. When I met with him about it, that was actually our first time meeting — we hadn’t worked on La La Land yet. But all during La La Land,” Neil, and Ryan as Neil, were in the back of my mind.

With Claire, it was really hard for me to figure out who could do [Armstrong’s first wife, Janet] justice. It’s so specific, especially if you look at the archival footage, the little bits of interviews of her. So I never would have expected that a British person would have been the one to do the role. But I was a big fan of Claire’s from The Crown and I [met with her and saw] her do her interpretation of an interview of Janet’s that just blew me away. Very quickly, it became obvious to me who had to play the role.

Ryan, how do you personify someone who is literally a postage stamp, someone generations of Americans have grown up with and have their own ideas about?

Ryan Gosling: Well, Jim Hansen’s book was really incredible. He was a close friend of Neil’s, so that was an important tool. But really I’ve never had more help on a film. Neil’s sons [Mark and Rick Armstrong] were very involved, I had the opportunity to meet Janet before she passed away. Neil’s sister, June, childhood friends, co-workers. Both his and Janet’s legacy were very important to a lot of people, and the insights that they shared about both of them were invaluable.

Claire, the movie kind of proceeds on two tracks: one following Neil in the sky and the other following Janet at home with the children and the other astronauts’ wives. How did you see her role in the larger story of putting a man on the moon?

Claire Foy: I don’t think that she felt that she was doing anything for the moon landing except supporting Neil. But she also knew that he could take care of himself, that it wasn’t her job to take care of him. They had this understanding between the two of them that was quite equal, I felt. So I think Jan really had her own life and she wanted to live that life fully. She had no intention of kind of living half a life because her husband was constantly putting his life in danger.

The death from cancer of the Armstrongs’ young daughter, Karen, becomes an unexpected catalyst in the film. Was that bereavement, which is not widely known, always a part of the story you wanted to tell?

Chazelle: Like most people, I never knew Neil had lost a daughter, let alone right before he joined NASA. Many of the people Neil worked with never knew anything about it — both he and Janet were somewhat private individuals and didn’t advertise their emotions. So the question became: What happens to you as a human being when you’re trying to process that kind of grief and are not processing it the way that, from a modern perspective, one would be advised to process it? You’re just kind of letting it fester inside you.

It did seem that, in some ways, that could be the thing that, without his even knowing it necessarily, drove him to keep pushing these boundaries and eventually wind up on the moon. And obviously it also becomes a question of what happens to a marriage when it goes through that loss. So that became sort of the guiding dynamic for the movie.

Gosling: When you talk to his boys, they talk about how he just had a ferocious appetite to know why things work. He was an engineer at heart and they described him as a human Google. I can only imagine, when you’re faced with such a tragedy, it seems like such a basic human instinct to want to find meaning in that. And since that type of loss is something that it’s hard to find answers for on earth, it seemed like it was certainly possible that he might also be searching for answers in the universe.

That’s not something that he ever said directly, but I was encouraged by his sons’ and Janet’s reaction to the screenplay, because it seemed that they felt that was a possibility as well.

The scene where Neil throws Karen’s bracelet into the crater — tell me about that. The rest of the film is meticulously naturalistic, and then it takes this bold, conspicuously ahistoric leap.

Chazelle: Well the idea for it did actually come from the historical record. Not that there’s a specific record of an object he left behind on the moon of Karen’s, but the parameters around it —we do know that Neil went off for about 10 minutes by himself, without being on comms or transmitting anything, to stand by this crater. And we know he brought at least one or two personal items that he did not disclose what they were. People that were close to him, specifically his biographer Jim and Neil’s sister, June, who Ryan and I spent some time with up in Ohio, hypothesised that he may have very well brought something that reminded him of Karen that he left on the moon.

But of course it’s not something that Neil ever confirmed or would confirm, and in a way I guess that makes it even more beautiful to me, the idea that he would kind of keep that with him and, I would imagine, Jan, and no one else.

There’s been some controversy over the fact that the film doesn’t show the precise moment when the American flag is planted on the moon’s surface, although the flag is shown on the moon after the fact. How aware were you of the current political atmosphere while you were making the movie?

Chazelle: It certainly wasn’t intended as a political statement, even though some have interpreted it as such. To me, the whole point of doing the movie was to focus on the things we didn’t know and we didn’t get to see that happened on the moon. We wanted to try to really focus on Neil’s subjective emotional experience and just see things through his eyes. Everything else had to be kind of alluded to in a more elliptical way.

The movie makes you feel the cost that was paid to put a man on the moon. And of course the big question that follows from that is “To what end?” I wonder if you feel like you ever got close to an answer.

Chazelle: One thing Mark Armstrong mentioned that really sort of spoke to me was this idea that if you’re going to judge the moon landing on the basis of the rocks that were brought back, or the experiments that were done there, or the things that have been done on the moon since, then yeah, you do have to ask, when you look at the enormous cost and sacrifice of life, “Was it worth it?”

But there’s this whole other less tangible side. The inspiration and sense of hope it gave to people all over the world. The motivation it gave to an entire generation that was taught that the impossible is possible. I think the enormous symbolic weight of it is hard to overstate.

What I find so poignant and beautiful about the moon landing is that on one hand, from a physical standpoint, it is this almost arbitrary goal — people walking on this barren surface and then returning home. But as a moment of humanity, and displaying what humanity is capable of, there’s maybe nothing that can ever top it. 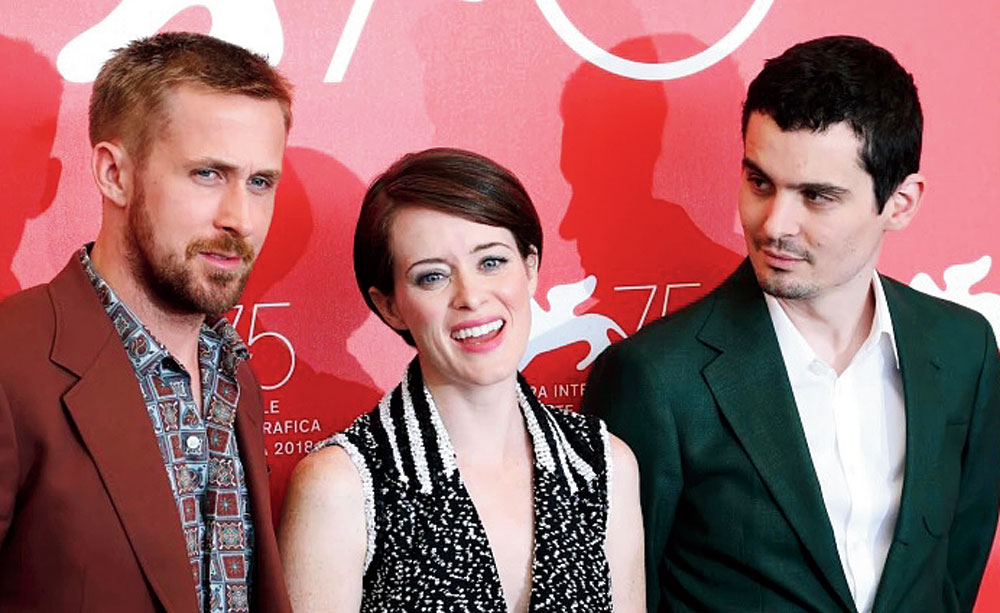