Ron Howard’s Thirteen Lives: A gripping survival drama of 12 boys & their coach trapped in a cave 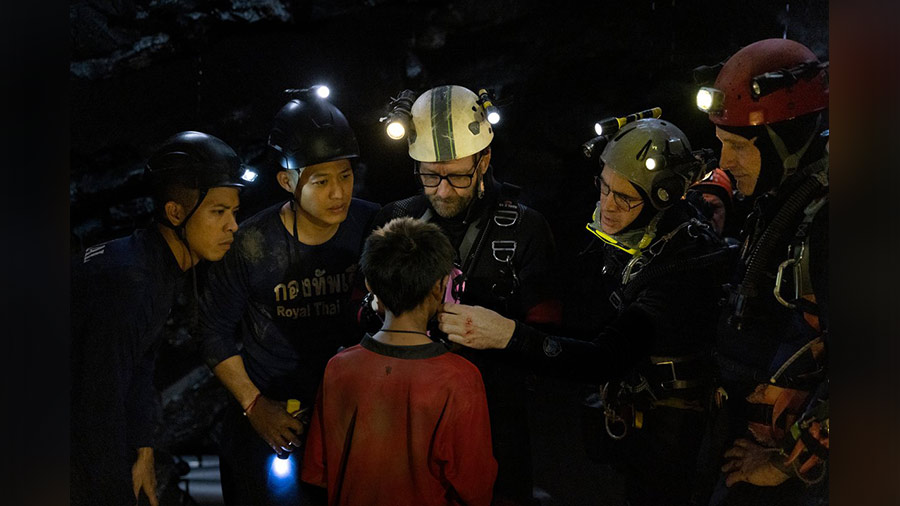 Academy Award-winning director Ron Howard’s latest film, Thirteen Lives, is a tale of human survival against all odds. Taking the true story of a dozen boys and their coach who were trapped in a cave in Thailand in 2018, Howard, who’s known for survival films like Apollo 13 (1995) and In the Heart of the Sea (2015), shuns Hollywood glamour to offer one of the most heartwarming films of 2022.

Here’s why Thirteen Lives, which dropped on Amazon Prime Video on August 5 after a short theatrical run, is a must watch.

The disappearance of a dozen boys aged between 11 and 16 and their 25-year-old coach in the Chiang Rai Province in northern Thailand had made news worldwide in 2018. The team was rescued after 18 days.

In Thirteen Lives, 12 youngsters along with their coach decide to take a tour of the nearby Tham Luang Nang Non cave after their football practice session gets over. There’s a sudden, heavy, unseasonal downpour which floods the cave and the group gets trapped. Volunteer British cavers Richard Stanton (Viggo Mortensen) and John Volanthen (Colin Farrell) discover them about four kilometres from the entrance of the cave. How the rescue team saves these 13 victims with the help of locals before the impending monsoon forms the crux of this gripping story.

A story of humanity against odds

At the heart of most survival dramas lies the triumph of the human spirit — not just of the characters whose fates are uncertain, but also the side characters who are not in danger but will rally around and stake their safety. Thirteen Lives has several pivotal moments that act as a soother.

One of the touching sequences has several local farmers agreeing to let the government flood their fields with the water that was being pumped out of the caves. In order to prevent rainwater from further flooding the caves, the local people also run a fascinating parallel operation to painstakingly cover sinkholes at the top of the mountain.

And the children who are stuck inside the cave are doing their best to keep their hopes alive. They help each other and practise extensive meditation with instructions from their coach. And rescuers come in from all around the world to let the boys and their coach out.

Not a white saviour narrative

Despite Hollywood actors like Colin Farrell, Viggo Mortensen, Joel Edgerton and Tom Bateman playing characters that receive a lot of emphasis in the movie, Thirteen Lives doesn’t come across as a white saviour narrative. They are but a small component of a larger operation, and the success of their skill depends on the efficiency of others.

Howard gives the Southeast Asian actors healthy screen time. He relies heavily on Thai actors to make the narrative as authentic as possible. From the military, the locals to the helpless parents tormented by the disappearance of their children, Thai actors are the backbone of the story that Howard tells.

Renowned Thai cinematographer Sayombhu Mukdeeprom, who has previously collaborated with director Luca Guadagnino in Call Me by Your Name and Suspiria, creates the claustrophobic ambience inside the cave while effectively capturing the wide range of emotions that the boys and their coach go through, from fear to helplessness to courage.

On the other hand, Howard visually repeats the geography of the cave by following the divers inside the cave and the rescue strategy frequently for us to get a sense of the magnitude of the operation and the key difficulties in executing them. James D. Wilcox’s extremely pompous background score adds to it to create the tension needed to drive the drama forward.

One of the major themes of Thirteen Lives is the significance of spirituality in Thai culture. With a short story of the spiritual significance of the Doi Nang Non mountain, Howard keeps drawing attention to this aspect with brief cutaways to monks praying for the boys’ safety near the cave. This provides a great counterpoint to the scientific, no-nonsense mindset of the western divers. Thirteen Lives is not just a survival story, it is also the story of Thailand and its people, and Howard, along with writer William Nicholson, incorporates even the most trivial cultural cues to enhance the drama.