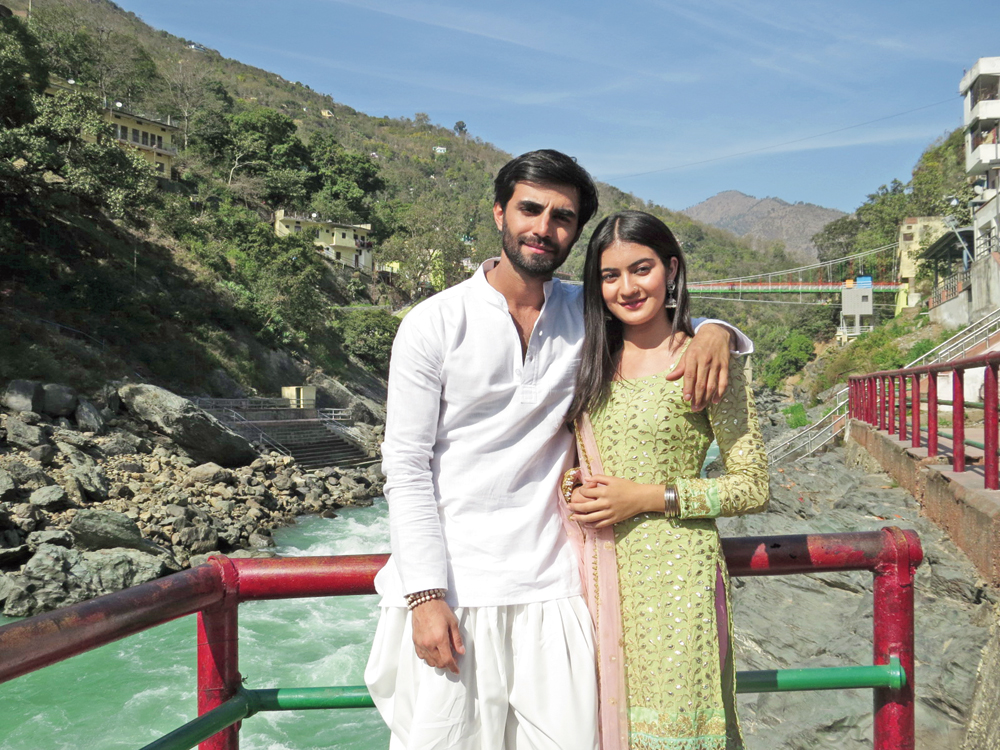 How cold can it be? That’s what I thought looking at the crystal clear water gently lapping the steps of the ghat. The sun was shining so brightly that I had taken my foam jacket off. So I caught hold of a metal rod on the water’s edge for support and gingerly dipped my toe. It was freezing but it was refreshing as well. Knowing that I could not take the chill for long, I waded towards the point where the turbulent Bhagirathi was rushing in to meet the docile Alakananda, letting go of my hold. Just a step lower, I thought, and I would be at the sangam… but the next step underwater was so deep that I lost my balance and fell.

Nothing so dramatic awaited me as what had happened some 70 years back at the spot to my then-teenaged uncle — who, as my father recollects, had to be rescued (read, dragged by the hair to the bank by two deft swimmers) from being swept away. A member of our group was close and quickly pulled me up. My jeans soaked to the waist and my left wrist sore from hitting a step, I gingerly climbed up, responding to umpteen queries about my well-being.

On the spacious landing of Sangam Ghat was the most spectacular setting that could be imagined for a press event. We were in Devprayag for a photo shoot with the lead pair of the serial Qurbaan Hua — Karan Jotwani and Pratibha Ranta — that has started airing weekdays at 10pm from February 25 on Zee TV. With a suspension bridge over the Bhagirathi behind them, they posed looking much more friendly than they would be on screen. The storyline of the serial runs thus: the girl’s father is a surgeon in whose care the boy’s sister was due to deliver a baby. The sister died in labour, turning the family against the doctor, who has to flee to save his skin. The boy saves the girl from his father’s rampaging henchmen and — wonder of wonders — decides to marry her. The reason is not love at first sight but a desire to nail her doctor-father! The girl agrees, not due to coercion, but to clear her father’s name in the family’s eye. The question posed in the show’s trailer is indeed baffling: Jo mila nahin sakte hain nazar/ Woh kyun baney humsafar!

There was a reason for the trip to Devprayag, about 70km away from Rishikesh where we were staying. This is where the story is based. As the show’s writer-producer Sonali Jaffar put it, the boy, Neel, is turbulent like the Bhagirathi and the girl, Chahat, calm like the Alakananda. Looking at the confluence of the two rivers, Karan recalled: “I hate cold water but I had to shoot a scene at the sangam. Light was falling fast in the January afternoon. It was freezing. To make it appear I was standing waist-deep, I was squatting in the water. Chahat had my dhoti which she was refusing to hand over to play a prank on me. It took a lot out of me to do that scene.” Karan is a Mumbai boy who is “comfortable at 27-28ºC”. This Calcutta girl, still partially wet, whole-heartedly empathised with him.

The narrow path to Sangam Ghat, flanked by shops, slopes gently downward but the way up is quite a trudge. Huffing and puffing my way back to the highway, at least 30ft above, I was happy to have to pause. A groom was coming out of a temple, with the bride being carried in what looked like the wooden base of a boat. “This is our custom — to seek permission from Raghunathji before marriage and to visit Him for thanksgiving afterwards,” the groom explained. On the way back to Rishikesh, there was a hour-long wait as two JCB machines cleared boulders heaped on the mountainous road. “Kaam chal raha hai. Yeh poora rasta four-lane banega. Phir koi jam-wam nahin hoga,” our bus driver assured.

In the evening, we gathered at the fireside on the hotel lawn for a chat with the cast. Brrr... we could not get close enough to the firelogs! The only person who looked comfortable was the leading lady, Pratibha, who did not even need woollens. “It was -4 ºC when we first came for a recce. We were worried ki ladka toh kar lega, par ladki kya paaniwaala scene kar payegi? We were so happy when we heard she’s from Shimla,” Sonali laughed. “I miss the cold in Mumbai. Every day he would ask me, wide-eyed: ‘Tum pahadi ho?’” Pratibha smiled, pointing to Karan, wrapped to his gills.

In the story, the boy’s family is Hindu and the girl is Muslim. But there is no communal angle, the makers insist. “Neel is a chef and has liberal views,” says Karan. “Our director Tabrez (Khan) sir is guiding me on the finer points of the culture, including the Urdu influence on Hindi pronunciation. I am working on my ‘kh’,” said Pratibha.

The day before, after exploring the pristine river at a spot next to our hotel, we went to Ramjhula, an iron suspension bridge over the Ganga built in 1986. Its more famous twin, the 90-year-old Laxmanjhula, 2km upstream, has been declared “unfit” and the Uttarakhand government plans to build a glass floor suspension bridge near the old site.

We took a ferry to cross the Ganga and in the courtyard facing a temple on the opposite side, we were introduced to Neel, the character. In an impassioned speech, he said how he and his sister grew up playing on the ghat. “But now I’ve lost her. And I will take revenge on whoever is responsible for her death!” he said with such ferocity that it would have worried Chahat, waiting nearby on the steps of the ghat to enact her introduction for us.

Afterwards, they did an aarti together for the shutterbugs. Then we headed for a well-known chai shop, Chotiwala’s, near the ghat. There sat a big-bellied man on a throne, sporting — what else but — a choti (a Brahmin man’s braid) on his bald head. It turned out that he was in the shop’s employ to pose as the chotiwala. “The make-up takes half an hour,” he says, barely parting his lips to protect the pancake coat on his face. “Our thali is famous,” the manager said.

The lanes and the ghat were beset with bovine jaywalkers. While some tourists devoutly offered them food, the local shop-keepers were less tolerant. “Ghar se bhaag ke aate hai. Udhar toh ghas chaare ke ilawa kuch milta nahin,” quipped the owner of a handicrafts shop. The monkeys were in lesser numbers and better behaved than at other pilgrimages.

Karan and Pratibha scoured the shops selling gemstones and handicrafts. “We had no time to shop while shooting,” Pratibha grimaced. With TV cameras on their heels, nor could they that evening.

As we walked back to the other side, crossing Ramjhula on foot, one could spot Ganga aarti taking place below on the ghat. But with the suspension bridge swaying with the passage of every cycle, clicking pictures was impossible.

On the last day of our trip, some planned a drive to Mussoorie, the hill station two-and-a-half hours away. But Dehra Dun-Calcutta connections being limited, I could not risk missing my flight. I’ll be back, I told myself, if only to taste the hot jalebi-rabdi combo again, seated on the riverbank. 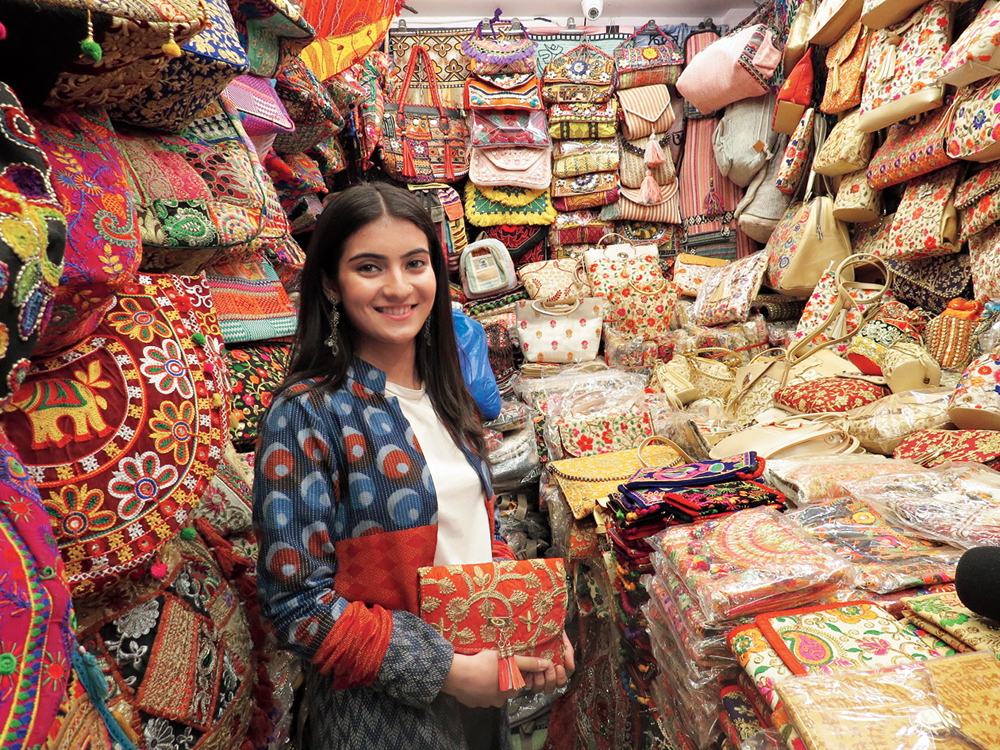 Seen before in: As the lead in Aap Ke Aa Jane Se (Zee TV)

Profession on screen: A chef in Delhi

Aim in life: Write scripts. “Writing is my passion. I was a journalist and copywriter before.”

Also doing: The lead in a web series for AltBalaji

Occupation: Student. “I am juggling my BA (film-making) classes with shooting dates.”

Goal on screen: To prove her father innocent of medical negligence charge.