The session ‘Avijatrik — The Wanderlust Within’, which was held recently at Kolkata Literature Festival 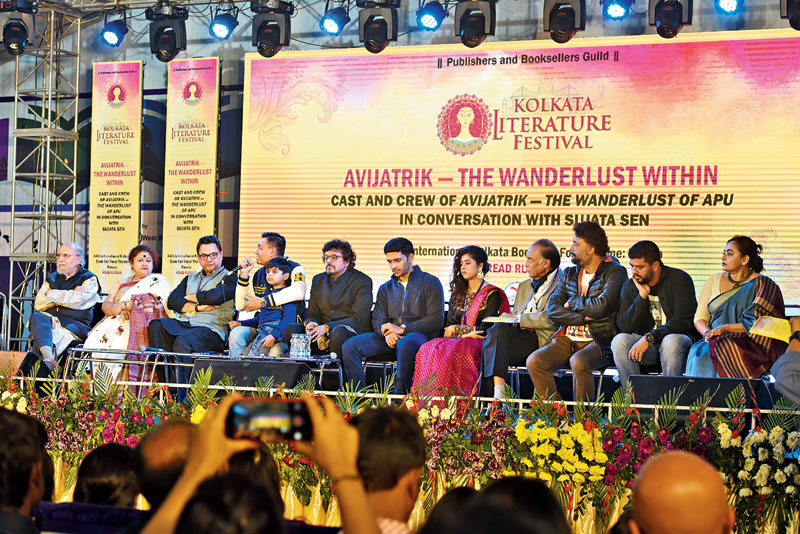 There is the patchwork of visuals from the Apu Trilogy and descriptions from the pages of the novel Aparajito engraved into our popular consciousness indelibly, and there’s Apu, who springs back to life on celluloid, picking up from where he had left off in Satyajit Ray’s cinematic world.

The session ‘Avijatrik — The Wanderlust Within’, which was held recently at Kolkata Literature Festival in association with The Telegraph, saw the cast and crew of the upcoming film in conversation with Sujata Sen, director, Kolkata Literature Festival. The session began with a screening of the teaser of the film, taking the visual narrative of Apu’s world ahead. Layered with memories, brief anecdotes and thoughts associated with the experience of bringing the film to life, the session came up as a polyphony of voices in and around the craft and creation of Apu’s comeback on screen, and his setting out for uncharted adventures.

“The ideation happened three years ago when the story was brought to me and after making up our minds, we met boudi (Mitra Bandopadhay) first,” said Gourang Jalan, co-producer, Avijatrik. Subhrajit Mitra, director, provided his insight into the ‘how’ of the making of the film, which included titbits about him studying the entire ouvre of Bibhutibhushan Bandyopadhyay, “to understand the characterisation and descriptive skills of the author”, including famous works like Aranyak and Ichchamotir Golpo, among others.

Percussionist Bickram Ghosh talked about going all out for the Avijatrik background score. He extracted the musical template for the film from Indian classical music. Talking briefly about his musical journey, he cited it as his agenda to reverse the “trend of Indian classical music getting westernised and ‘hippi-ised’ in Indian cinema music”. For his music for the film, he mentioned Madan Mohan and Pandit Ravi Shankar as his reference points for attuning the music to the “experiential-ness and philosophy of the film”.

On-screen Apu, Arjun Chakrabarty spoke on seeking inspiration from the unique and original script itself, for art is often mostly a flurry of imagination. “I had no intention of drawing inspiration from anywhere. What Subhrajitda aimed at was a very original script, and I wanted to bring out what is unique to me, based on the pages of the novel Aparajito which Satyajit Ray did not adapt. Aparna, played by Ditipriya Roy, put out her experience as “tough and amazing”.

Having no reference for her character Ranudi, Sreelekha Mitra praised the detailing and the clarity of the storytelling in the film. The earliest of the cast to join the film, Barun Chandra, enumerated the three difficulties of conceiving the film, which started from finding a producer to looking for Apu and finally creating 1940 today. “There is not a single item from that time to be found but the sets that were put up, for example, the house of ‘bouchara shaami’, the very set-up with the lighting and the details, were done wonderfully,” he said. Bengali writer and journalist Gour Kishore Ghosh made for the visual mould of his character.

In a world of celluloid images saturated with technicolour, going black-and-white was akin to going back on the flow of technology, and a major creative decision. “The team was committed to the script, but it was difficult to create the era in 2019. So it was quite challenging to bring it to a black-and-white canvas,” said Joy, cinematographer, for whom this was his first black-and-white film.

Mitra Bandopadhyay, daughter-in-law of Bibhutibhushan Bandyopadhyay, was very excited to realise that her father-in-law’s books still ignite a deep thought in popular consciousness. While also expressing her excitement to see the film and how it lives up to the legacy left by Ray’s masterpiece, she touched on the crucial point of creative divergence that might come in during the cinematic adaptation of a book. “In Pather Panchali, Durga could never see the rail line, which gnaws at Apu’s heart ever after, but Ray reverses that in the film,” she remarked.

At the close of the session, the teaser of the film was shown again, bringing the session to a full circle, and more importantly, extending the showreel of Apu as seen in Ray’s films into the eager anticipation of Apu coming back soon on screen.