Fifty-seven years later, the 25th Bond movie, No Time to Die, is due to be released next April 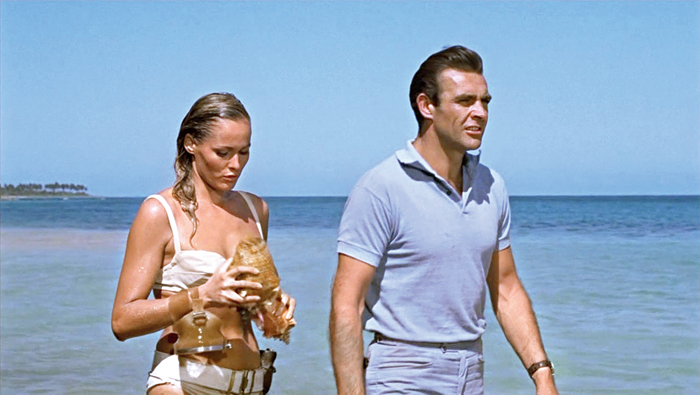 Sean Connery and Ursula Andress on location in Jamaica during filming Dr No. (Right) Live And Let Die, one of the five books to be auctioned on Wednesday
Still from the film
Amit Roy   |   Published 09.12.19, 07:49 PM

Five James Bond novels, which the author Ian Fleming gifted to his close friend and neighbour in Jamaica, the playwright, composer and actor Noël Coward, are to be auctioned by Christie’s in London on Wednesday.

Fleming’s home, Goldeneye, was a short distance from Coward’s residence, Firefly. It was in Jamaica that the first Bond film, Dr No, was shot, starring Sean Connery as 007 and Ursula Andress, playing the first Bond girl, Honey Ryder.

Fifty-seven years later, the 25th Bond movie, No Time to Die, is due to be released next April.

The auction provides an insight into the relationship between the two men. It is generally accepted now that Bond was “born in Jamaica”. Coward encouraged Fleming to write the novels and was distraught when his friend died.

There are five books on sale at Christie’s Valuable Books & Manuscripts sale, each providing a little insight into Fleming’s friendship with Coward.

They include Live And Let Die, On Her Majesty’s Secret Service, The Spy Who Loved Me, You Only Live Twice and Thunderball — the first Bond novel to introduce the Spectre crime syndicate, led by Ernst Stavro Blofeld.

The Spy Who Loved Me, the shortest and most sexually explicit of the Bond novels, carries the inscription, “To Noël, read and burn!, from Ian.”

Fleming references Coward in You Only Live Twice, the final Bond book to be published during the author’s lifetime.

Bond quips to Blofeld after an explosion: “Now bring on the 12 she-devils, and if they’re all as beautiful as Fraulein Bunt, we’ll get Noël Coward to put it to music and have it on Broadway by Christmas.”

It is pointed out that all 14 Bond books were “written at Fleming’s Goldeneye estate on the Jamaican coast, where he counted Noël Coward as a neighbour. Coward, inspired to build his own Jamaican retreat by a visit to Goldeneye in 1948, was Fleming’s closest friend on the island and it was with his great encouragement that Fleming began writing the Bond novels that made him famous. When Fleming married Ann in 1952, Coward was one of two wedding guests and in the same year he was made godfather to their new-born son Caspar.”

Fleming died in England of a heart attack in August 1964. Upon learning of his friend’s passing, Coward wrote: “Now Ian has died and it is a horrid but expected sadness. He went on smoking and drinking in spite of all warnings. Annie has been distraught for months watching the inevitable approaching, and now it has happened. I am horribly distressed for her and miserable for myself. He has been a good and charming friend to me ever since I have known him.”

Mark Wiltshire, Christie’s associate specialist, books and manuscripts, said: “These first editions provide a window into the fascinating friendship between Ian Fleming and Noël Coward, neighbours in Jamaica and two of the 20th century’s most famous personalities.

“Each volume is inscribed by Fleming with a personal message to Coward, often playful but also filled with respect and gratitude for his encouragement in the early days of Fleming’s career as a novelist.

“They have come to market for the very first time directly from the Noël Coward Foundation, and are sold to benefit their educational and development projects across the arts.”