Rajinikanth and Suriya bowled over by R. Madhavan’s Rocketry: The Nambi Effect 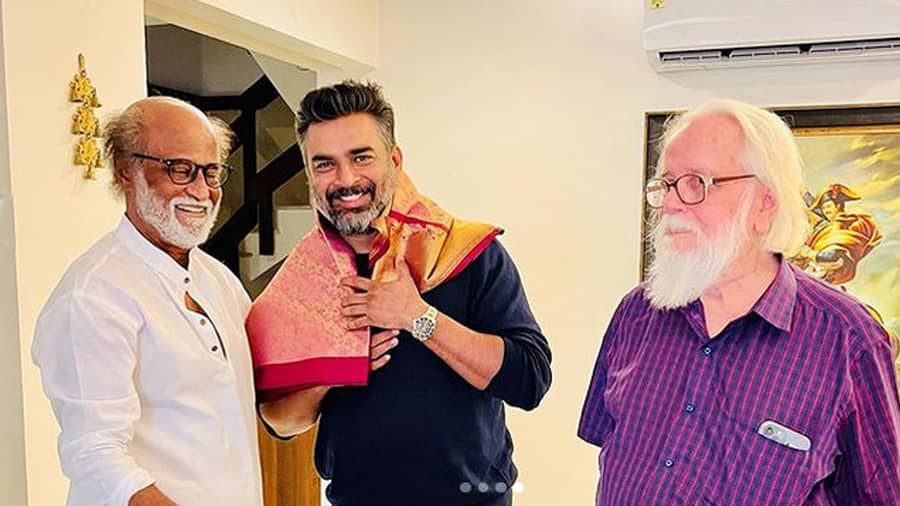 In the film, Madhavan plays ISRO’s aerospace engineer Nambi Narayanan who faced charges of espionage and was later exonerated.

Rocketry: The Nambi Effect released in theatres on July 1, and is now available for streaming on Prime Video and Voot.

Madhavan took to Instagram on Sunday to share a video and pictures of the trio from the meeting and thanked Rajnikanth for his support and love.

“When you get the blessings from a one-man-industry & the very Legend himself (Rajinikanth), in the presence of another Legend (Narayanan). it’s a moment etched for eternity. Thank you for your kindest words and affection #rajnikanth sir. This motivation has completely rejuvenated us. We love you as does the whole world,” he wrote.

Rocketry: The Nambi Effect has earned applause and appreciation from different parts of the world. It was also showcased at the Cannes Film Festival 2022.

Among actors who have been all praise for Rocketry is south star Suriya. During the shoot of Rocketry, Suriya had dropped by the sets, much to the surprise of the renowned scientist who’s a fan of the Jai Bhim actor.

Madhavan shared a video of Suriya visiting the film set and wrote, “Only my bro @actorsuriya can make me feel so good and react like this.. Nambi sir is a huge fan of my bro and his father. #rocketrythefilm.”

Madhavan is dressed up like Narayanan in the video and it is hard to tell who the real Narayanan is.

The debutant director also shared a video of his virtual conversation with Suriya about Rocketry. In the video, Suriya talks about how the film has influenced so many people and created waves on social media.