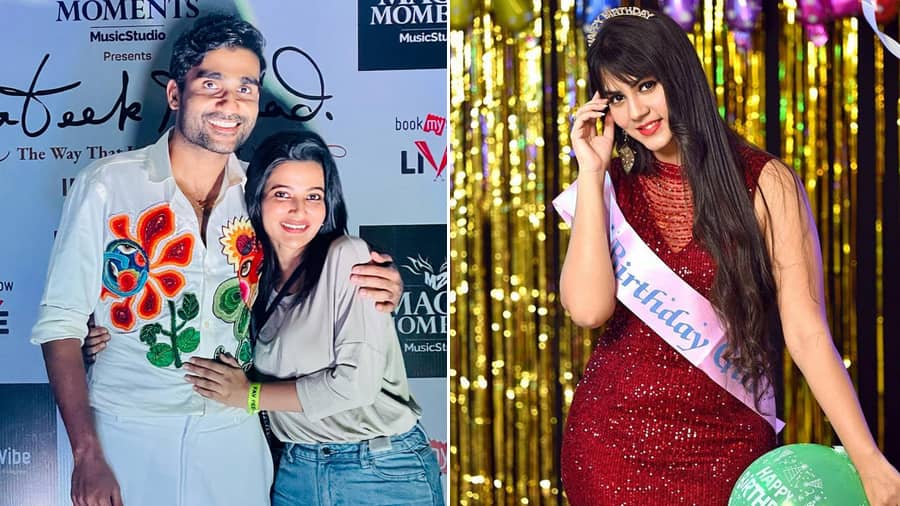 Prosenjit shared a dialogue from his film One and talked about his negative role in that movie. Nusrat Jahan and Yash Dasgupta also featured in the Birsa Dasgupta-helmed film, which was released in 2017.

Ritabhari Chakraborty came up with a vintage look in her latest Instagram reel on a viral trend.

Srabanti Chatterjee posted a photo of her Saturday night unwinding with friends.

Paoli Dam posted glimpses from her hiking trip with family in the Sierra Nevada mountain range in Bishop, California.

Rukmini Maitra went for a sunshine yellow dress on Sunday.

Trina Saha enjoyed some fun time with her cat over the weekend.

Rittika Sen stepped into 21 in style, with a shimmery maroon gown, crown and birthday sash.

Ushasi Roy dropped photos posing with Prateek Kuhad’s recent gig in the city. The actress came up with the caption — “All I Need is CO2, Favorite Peeps and a Full Time Lover to Drown yet Bloom in his magic ❤️yeh meri Kasoor nahi ki Tune Kaha aur main huyi Dil Beparwah #TWTLD

From hearing him at Kala Mandir in 2019 to running into him at Flurys in 2020 to his concert at nicco park in 2021 to TWTLD concert in 2022, I have secured my hattrick of attending Kuhad’s concerts🥰

Soham Majumdar and Madhumita Sarcar-starrer Dilkhush is releasing on January 20. Have you tuned into the track Bibagi Phone yet?