Among 386 films slated for Feature section, only 20 are finally selected for screening at event, one of them was Mahananda 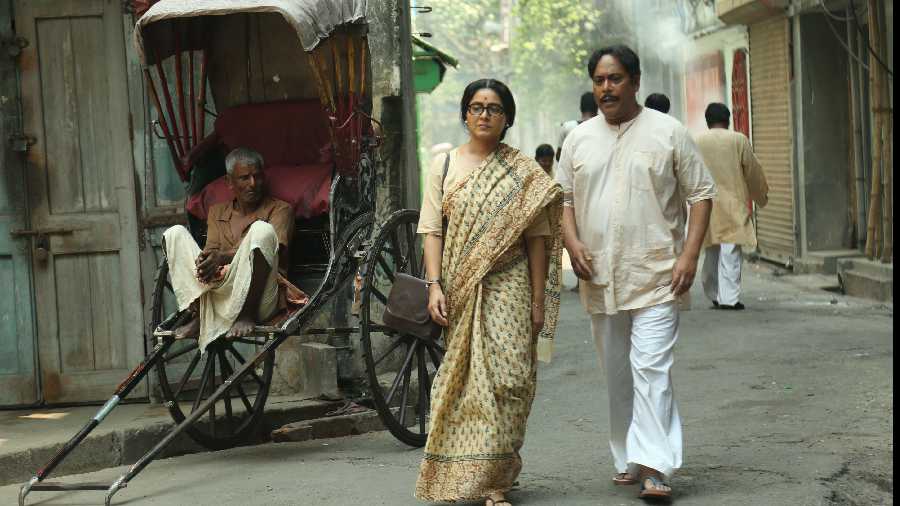 The news of our film Mahananda being selected for screening at the prestigious Indian Panorama of the 53rd International Film Festival of India (IFFI) was reason enough to rejoice. Since its inception, the IFFI has nurtured and provided a promising platform to world cinema enthusiasts. Among the 386 films slated for the Feature section, only 20 are finally selected for screening at the IFFI, which is one of the most significant film festivals of Asia.

However, it did not come as a surprise to us since Mahananda is a film that is really well crafted by director Arindam Sil. Gargee Roychowdhury has done an excellent work. The music by maestro Bickram Ghosh becomes a character in the film, which is based on the work and ideologies of a personality like Mahasweta Devi. That is bound to be inspiring.

The journey from Calcutta to Goa seemed more like a quick getaway trip planned with friends as Arindam Sil, Shukla, Bickram Ghosh and Gargee met us at the airport. Arindam, Bickram, Hasnu and my friendship goes back a long way since we share our alma mater, St. Xavier’s College, Kolkata.

All of Panjim was lit up and decorated beautifully to welcome the IFFI delegates and the hospitality was wonderful like every other year. Amidst the press conference, the red carpet for Mahananda and interactive sessions, I made time to visit the Film Bazar at the Marriott for a quick meeting.

This is the third time I have been invited to IFFI for my films and every year the entire concept of the Film Bazar fills me with wonder. The sheer number of things that happen here! It is like a huge exhibition where workshops, classes, seminars, conferences and meetings are held simultaneously. It is a converging point for film producers, directors, actors and film studies students from across the globe. The evenings at the Film Bazar by the sea are languid with easy tete-a-tete with some of the biggest names in world cinema. The in-conversation sessions with the young artistic geniuses from various parts of the world and the diverse and changing language of world-cinema experience, that is showcased at the Film Bazar every year, is very encouraging for us. During dinner back at the Taj Vivanta I could catch up with my friends from the Film Federation of India, where I was the president, and discuss the future of films.

The red carpet this year seemed bigger than the last two times. It was heartening to meet notable cine personalities like Dhritiman Chaterji, Mani Ratnam, Shaji Karun, Chanchal Chowdhury and Nusraat Faria from Bangladesh at the ceremony. Interestingly, Mahananda is the only Bengali film made in the Bengali language which was selected in the Feature Film category, this year.

The walk down the red carpet always reminds me of all the obstacles we have to overcome as film producers, in the journey of taking a film from its inception to its completion. The questions from the Press and the adulation from the huge audience tells me that the journey was worth it. We only need to move ahead and focus on making good films. As a producer, I promise to continue to stand by more such good films, if you, the audience, promise to meet the result of our hard work, at the theatres, every time, with the same overwhelming response with which you met our film Aparajito, recently.

I started producing films because I enjoyed the process and Friends Communication, which completes a decade in film-making next year, has made 15 films till date. I never think that Friends Communication makes ‘Bengali’, as in, ‘regional’ films. We produce good Indian cinema in the Bengali language. Our films, such as Natok Er Moto, Meghnadbodh Rahasya and Mahananda have been selected for screenings at the prestigious International Film Festival of India. Our film Mayurakhshi bagged the coveted National Award and I am hopeful about our forthcoming films Shesh Pata and Hubba, which will release soon. So I feel that if you enjoy your work and do it with honesty, then nothing can stop you. I believe that films have a great impact on lives and only films can weave the world together in its intricate tapestry cutting across the divides of cultures, religions, languages of different countries.2