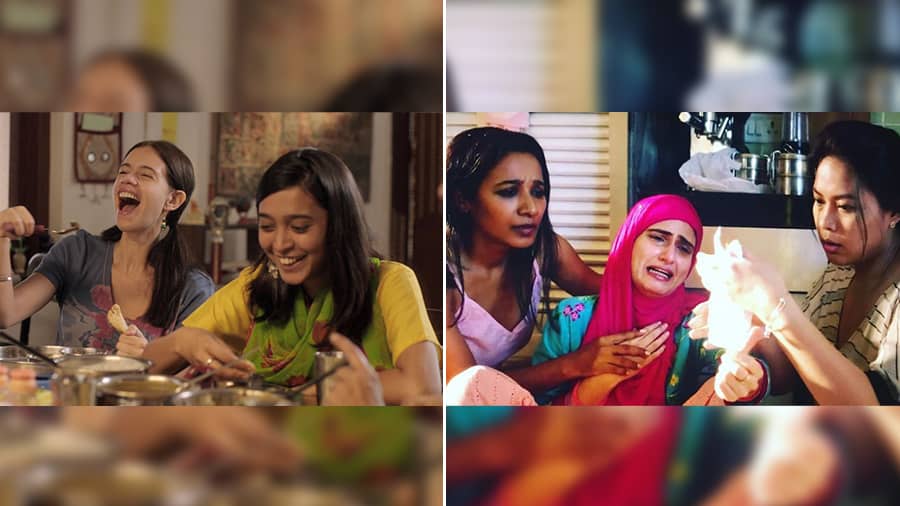 Shonali Bose became a filmmaker because she wanted to change the audience’s perception through representation. Her films — Margarita with a Straw, The Sky is Pink, Raat Rani (Modern Love Mumbai, Netflix) — have provoked people to think and begin a conversation.

During the ongoing Pride Month, she reminisces to The Telegraph Online about how she was subjected to trauma as a young woman in love with another woman during her days in Miranda House and how she made it a part of the character in Margarita with a Straw. She also feels mainstream films can impact popular ideology and the audience is gradually becoming receptive to all kinds of films. Over to Shonali:

The world is celebrating Pride Month. Tell us what you think?

Pride Month is very important. People who are queer, especially young people, understand what the world is talking about. I have always participated in the parade in LA, where I lived for 30 years. It’s the time we recognise and accept everyone.

Do you feel films are an ideal medium to impact popular thinking?

Absolutely! This is one of the reasons I became a filmmaker because true cinema has a narrative and a mass following, so you can easily change perceptions by representation. When it comes to gender, we should show more women in roles where they are empowered and are speaking for themselves. Coming to the gay community, cinema can break the barrier and change people’s perception just by the way we represent any minority section or any section of the society that is facing oppression. Cinema plays a big role in society.

How far do you feel films can change a perspective?

Margarita with a Straw changed people’s thoughts about someone who is disabled. The film was crafted in such a way that no way can one feel pity for the character (Kalki Koechlin) and that is what people who are disabled yearn for, they don’t want to be pitied. So, I created a sort of character who’s not out on a pedestal. She cheats on somebody, she breaks hearts, so she is empowered. She has agency. Hence, the representation. The way I portrayed her, I don’t know a single audience member, who saw the film hasn’t come out with a different thought. Many parents reached out to me and said that it is a difficult situation for them to think of their children’s sexuality, but they thanked me as people got educated as it portrayed the truth about teenage children who are in their 20s. In India, we just shut our eyes and can’t think that disabled children can masturbate, or they can have a yearning to get married or also have a partner and can they or can they not have sexual desires. This is a pathbreaking change that came about with Margarita with a Straw. I have seen it in my own life with my first film Amu. I just had a screening at Soho House and the people who came there weren’t even born in 1984. They were like why wasn’t it taught in History in school. It was about genocide as huge as the Partition and nobody knows about it. Anybody who watches Amu gets a political understanding and awareness. By touching your heart, good cinema can provoke you to think and not accept how you are brought up and think this is the status quo and reality.

There is a huge change that has happened in the past 10 years where you have quite a few mainstream films like Badhaai Do. It was a lovely example as it was released in the theatres. It had mainstream actors like Bhumi Pednekar and Rajkummar Rao playing those roles. In the other film Chandigarh Kare Aashiqui, you have a trans character (Vaani Kapoor). You can see it in these examples. These are the films that are popular and they have done well which means it’s not going to be your 300-crore film. Maybe that time will come but that you can make a mainstream film and can release it in the theatres is itself a big thing.

How did you envision same-sex relationships in Margarita with a Straw and Raat Rani so effortlessly?

I am a bisexual, so I remember how it was a terrifying thing when you are a young person in a same-sex relationship. You feel society will judge you. I was in Miranda House when I was in love with a woman who had come from the University of California-Berkeley on an education exchange programme. We were in a relationship. I had no judgement of myself and was very accepting of myself. Many gay people go through painful periods because they are brought up to think that it is a terrible thing. My partner felt like it was a sin and she couldn’t come to terms with it. I didn’t feel that at all. Raised in India, we were educated about being gay. I guess, in general, my parents were open, progressive people so I didn’t feel bad about myself, so that’s a good thing. It was traumatic because somebody saw us and found us and it was gossip in the college. It was horrible because I was a young person in love with someone. It made me realise how important it is and that’s why cinema is where we can talk about it. When I was writing Margarita with a Straw, it came from my own experience to make the character.

In Raat Rani, it was entirely my writer Nilesh Maniyar. He co-wrote Margarita with a Straw with me. He welcomed the idea and thought it was fabulous. He was open to it. He faced resistance from the production houses that we first made the protagonist disabled and then we made her gay. Nilesh came in as a producer when it wasn’t legal in the country. He felt that in no way we can turn back the script and that we will find the money and will keep the characters gay, so it was huge. In Raat Rani, it is he who wrote and didn’t want to make the employers of the protagonist heterosexual. Interestingly, it is how we are conditioned when we write something, we automatically make the characters heterosexual. So when he wrote, I didn’t even question him. Being a queer myself, I didn’t even ask him to do it. He’s the one who did it. I loved it when he thought about making them a queer couple because it was his own idea based on two people who we know in LA. They have two sets of twins. I told Nilesh to have one set of twins because we can’t have four kids on the sets. (Laughs) Interestingly, if you see, in the film, the middle-class woman broke up and the working woman also broke up, but the happy family was the gay couple with ‘hum do, hamare do’. (Smiles) We kept it subtle in Raat Rani, we didn’t want to include a kiss so that people would notice. So, it was good if people noticed and okay if they didn't. You make certain characters gay, even if the stories are not about them. That’s how you can normalise. It’s the same with disability. It’s how we break the barrier, and push to change the representation wherever we can. I had put up a post on Instagram just before Pride Month that I am happy and proud in a small way we could spread awareness.

Do you think you were ahead of time with Margarita with a Straw (2014) and that it should have been released now?

Margarita with a Straw did decently well. I was surprised when it opened on 300 screens while Amu was released on five screens. It is a love story between two women. We raised the money, made the film, and released it in the theatres in 2014. It was a cusp time when different films came out and I am glad and happy about that.

What do you think about the caricature portrayal of queer characters in Hindi films over the years?

That’s awful! We grew up watching caricature characters and that realisation has come in and I am happy.

Queer characters in films are often stereotypically dressed. Why can’t they be normal? I agree with you. That’s what we say when we cast, we talk to the casting agency. We don’t need to cast lesbians with tattoos or have a wacky dressing sense. They should look normal and happy to be in love with another woman. I like how cool queer people look but I am not in favour of stereotyping. They look like anybody else.

Which are your favorite queer movies that have stayed with you?

Brokeback Mountain was one of the path-breaking films coming out of Hollywood. It was so powerful and fantastic. To show gay relationships at that time was a path-breaking journey. Aligarh is a beautiful film and the fact that it is based on a true story. Manoj (Bajpayee) did such a subtle job. I loved Badhaai Do. It’s an entertaining yet accessible film for a regular audience to watch and appreciate.

Shonali Bose loved Badhaai Do, which she found entertaining, yet accessible.
Instagram

For some, coming out has been a huge struggle, especially to themselves and then to the world?

The work that one needs to do is self-acceptance and love themselves. If you reject your own self and sexuality, when the society is harsh and so are the parents, you need to let all go and come out. With time, parents and grandparents come around. You can’t be dictated by family. The queer community is a big family, and they stand beside each other as many people are cut off from their own families. So, you are family to many other people as well. It’s a horrible thing to live your life in a closet and in darkness because things have changed. Never allow yourself to get emotionally blackmailed and or have guilt.

There are a lot of exciting things lined up. I have 15 projects to look forward to in the next three years. I am excited to get all these made. Some are web series and some are films, but each is unique and different.

Besides work, you seem to be enjoying trekking a lot?

For my 57th birthday, I took a solo trek, camped in a tent and ended the trip with river rafting on the Ganga, which was super fun. I feel younger and fitter as I grow older. (Smiles)