The film is about friendship that affects your entire being and stirs up your spirits, about bonding that opens your eyes to a new way of seeing the world 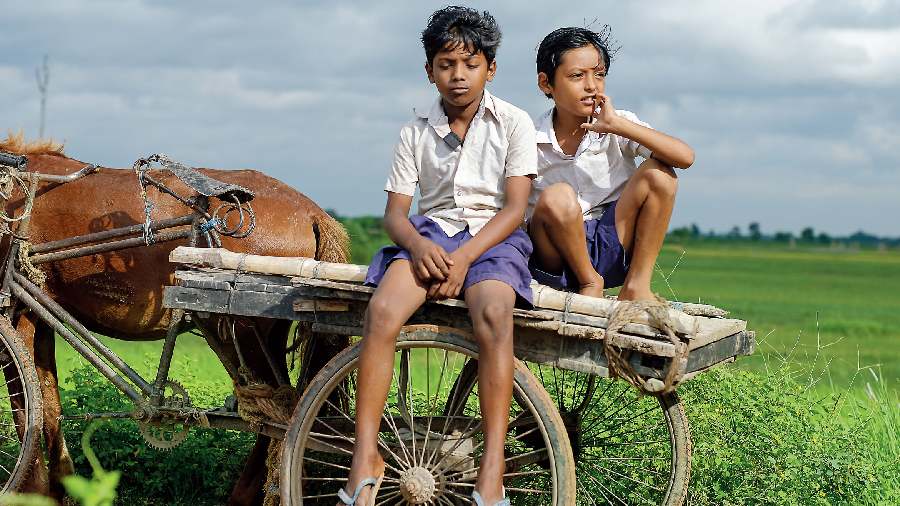 When we are young, our minds are open and fresh like a blank canvas. Wherever we go, we make friends. Together, we laugh, play, fight, or just sit silently indifferent to whatever is taking place around us. By some miraculous chance, one of those interactions could be something ‘special’ that would take us hand in hand to where we actually belong; to unlock and unveil timeless treasures of the heart and soul, changing the way we see life and the world at large.

Prasun Chatterjee’s Dostojee is not a typical tale about two childhood musketeers. Rather, it is about friendship that affects your entire being and stirs up your spirits. It is about the bonding that opens your eyes to a new way of seeing the world.

Set in the early 1990s in Bengal’s Murshidabad district, which shares a permeable border with Bangladesh, the film depicts a time when the delicate harmony between Hindus and Muslims had become strained following the demolition of the Babri mosque in Ayodhya and retaliatory bomb attacks in Mumbai.

It is the unobtrusive images of the countryside or the skyscape that create the first impression in the film, genuine and pristine in their hues and shades.

Two bright young faces emerge with a glow of purity and innocence. Palash and Safi, aged about eight or nine, are apparently a perfect match. Rain or shine, they are inseparable. They live in houses with shared walls, sit on the same bench at school, take tuition together, roam around endlessly, and even share physical similarities when seen from a distance.

While Palash is shy and studious, Safi is playful and more prone to breaking the restrictions set by his parents. Rather ignorantly, they straddle religious boundaries drawn for them since one is Hindu, while the other is Muslim.

A moment from the film, running in theatres now

But the film stays far away from idealising communal harmony, and that is what sets it apart. As extremism grows in the village, the film deepens in complexity and poignancy, and the us-versus-them rhetoric fades into the background.

But the political design behind fuelling hatred between communities by those in power is put across through subtle allegory. In the middle of a jatra show, Palash and Safi go behind the stage and observe the on-stage opponents chatting and smoking.

As they stare at them utterly confused, one of the performers clarifies, “We are not enemies. We are only playing enemies for the entertainment of the audience!”

It is this quirky sense of irony and humour that seeps in and makes the journey so endearing. Narrative, emotion, and social commentary are all integrated into humour.

A cycle repairing shop owner sporting an Amitabh Bachchan hairstyle that looks odd on his face, the nonchalant ease with which schoolchildren leave the classroom for not doing their homework, or the unabashed showmanship of local religious leaders to garner donations from the public, add a layer of conviction reflecting the socio-political climate of that era as well as the contradictions and idiosyncrasies prevalent in society.

In examining the bonding and isolation of the two boys, the film reaches soaring heights. Their simple acts of discovery and their poignant manifestation stands out as a marked departure from the cliched portrayals of village children in films. At home too, their worlds are strikingly different.

The parents appear as distant figures to the children. Safi’s father mostly works on the handloom that his family weaves while Palash’s mother is always doing household chores. The private tutor assigned to teach the boys in the evenings appears to be the only adult concerned about the boys’ well-being.

Asik and Arif Shaikh as Palash and Safi are absolute wonders. The roles they play seem to reflect their inherent existence. Many of the supporting cast including Safi’s sister and Palash’s mother lend intuitive performances. The sheer naturalism that flows out of their acts does not come from acting workshops but from a bond of mutual trust and acceptance between the actors and the director. Organic film acting is also influenced by the nuanced script that aims to engage the psyche more than to heighten the intensity of the drama.

A compelling quality of the film lies in its cinematography, which lends a deep sense of veracity to the images. They appear to be captured rather than shot. Using a verite approach laced with poetic longing, the film begins with a series of wide shots that convey the verdant beauty of the locale. The camera then opts for more intimate observations of human psychology that reveal the escalating tensions and diverse range of emotions. Eventually, when loss and grief creep into the narrative, the frames get even darker, gloomier, and claustrophobic. The subtle sound elements like that of the weaving machine, crickets buzzing, distant tones of Azaan, or the long stretches of falling rain play an influential role in shaping the circumstances of the film and keeping the story and its characters close to their roots.

Like any debut film, Dostojee does have its rough edges, getting overindulgent or predictable at times. Nevertheless, blemishes aside, it chronicles a very tender and heart-warming perspective of waking up to a weird, challenging, and yet wonderful world through love, pain, and the inevitable healing. The sensitive child explores endlessly, discovering the world around him and creating value hierarchies based on this knowledge.

It is the smallest bits of pleasure and pain that form the bedrock for all his preferences and understanding of life. There are many paths from childhood to adulthood, and there is no definitive marker of when it happens: a first shock, a first heartbreak, or gaining newfound responsibility could trigger it. This film strikes a balance between a coming-of-age story and a meaningful engagement with nature that makes one come to terms with life’s realities. Watching the caterpillar grow into a butterfly, or responding to the ever-enthusiastic cuckoo call, can turn this world of stolen focus into one replete with a sense of purpose.