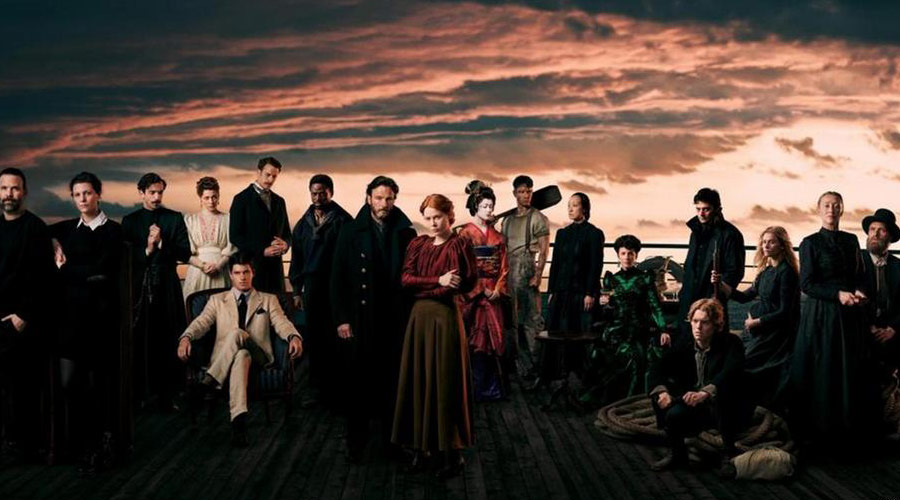 Just shortly after the new Netflix series "1899" launched, Brazilian comic book writer Mary Cagnin came forward and claimed several parts of the series were stolen from one of her works.

She mentions the pyramid, the ship, the multinational crew, and speculates that the series creators discovered her work at an international comics convention.

Then she goes on to tweet that there are "countless cases of gringos copying us," whether in movies, series or music. She mentions the Canadian author of the hit book and movie "Life of Pi,” Yann Martel, who admitted he was inspired by a Brazilian book.

Baran Bo Odar and Jantje Friese, the makers of "1899" and the international hit series "Dark," feel they have been wrongly accused and say they were not aware of her work. The pair stated that they would never steal from other artists, since, after all, they are artists themselves. The case is now in the hands of lawyers.

'Stranger Things' accused of plagiarism too

Another hit Netflix series, "Stranger Things," has a lot in common with adventure films of the 1980s, such as "The Goonies" and "E.T." by Steven Spielberg, or even the coming-of-age drama "Stand By Me" based on a story by Stephen King.

But as these aspects of the series are clearly a homage to that filmmaking period, neither Spielberg nor King claimed their work had been plagiarized by the show's creators, twins Ross and Matt Duffer.

Claims of plagiarism rather came from a relatively unknown filmmaker named Charlie Kessler, whose short film "Montauk" tells the story of a boy who disappears without a trace and is set against the backdrop of paranormal events in a small town near a mysterious military facility.

Kessler says he told the Duffer twins about his film on the sidelines of the Tribeca Film Festival in New York, but a collaboration never materialized.

Two years later,Netflix released "Stranger Things" — a story about a boy who disappears without a trace in the midst of paranormal events. The fictional town in the show is also next to a military facility, as in Kessler's short film. When the series started to become successful, Kessler went public with accusations of plagiarism.

The Duffer brothers also claimed the lawsuit against them was nothing more than an attempt to profit from other people's creativity and hard work.

From 'Hunger Games' to 'Squid Game'

In a US late night show, director Quentin Tarantino said in the summer of 2022 that he considers the "Hunger Games" film series to be a copy of the Japanese feature film "Battle Royale."

The claim was not news to the book series' author, Suzanne Collins. Throughout her career, she has repeatedly been accused of stealing the ideas for her books.

For example, she is said to have borrowed from Stephen King, who in his book "The Running Man" tells the story of a family man who, in order to be able to pay for medication for his seriously ill daughter, takes part in a deadly game show. The dystopian thriller novel was made into a film in 1987 starring Arnold Schwarzenegger.

The common theme in "Battle Royale," "The Hunger Games" or "The Running Man" is that people must fight each other for survival to amuse a perverse audience.

Another story on this theme is the hit Korean series "Squid Game." According to a plagiarism claim, the series was taken from a 2014 Japanese horror film called "As The Gods Will." The movie is set in a Japanese high school and the children are forced to participate in the murderous games. Yet it differs form the plot of "Squid Game," as highly indebted adults voluntarily play the deadly games to win a billion-dollar prize.

Who had the idea first?

"Squid Game" director Hwang Dong-hyuk can't be accused of stealing an idea: He had been trying to sell his story since 2008 and didn't succeed until Netflix bought it.

Yet, whether it's music, stories or movies, accusations of plagiarism are commonplace. It's not easy to prove someone had a certain idea first. Likewise, it's not easy to prove others stole an idea. After all, it is not entirely out of the question that two people out of eight billion people have similar thoughts or stories in mind.

That's why plagiarism lawsuits rarely have a chance of success in court — especially in the case of films which involve a large creative team and a long creative process.

In addition, large film studios or production companies have entire brigades of lawyers and money at their disposal to be able to win such lawsuits.

The creators of "1899" found themselves in the midst of controversy, attacked on Twitter and Instagram from followers of the Mary Cagnin, the Brazilian author who claimed her ideas had been stolen.

Fans of her comics have begun to provide evidence, detailing which scenes, characters, and symbols they think had been been swiped by the "1899" team.

Conversely, "1899" fans say the examples mentioned are basic elements of the science fiction genre and can't specifically be claimed.

"1899" creator Baran Bo Odar was also quite clear on Instagram when addressing the uproar online. He and his wife and co-writer Jantje Friese had been the subject of personal online attacks in recent days. The internet, he says, has become a strange place.