Looking back at some of Bojack Horseman’s most impactful moments 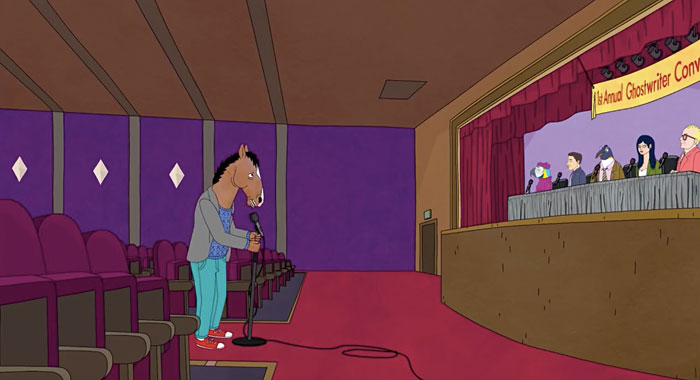 In the 2010s, there was a very famous Netflix show that addressed mental health, before it became ‘cool.’ On paper, an adult cartoon about a bitter, self-loathing humanoid horse trying to grapple with his fading relevance in showbiz sounded like a laughable idea for a television show.

But BoJack Horseman made the tragicomedy genre what it is today, and over the last six years, has dealt with issues ranging from anxiety, depression, substance abuse to grief. In the process, we all found a little bit of ourselves in the flawed protagonist, and laughed, cried and watched transfixed as he kept sinking deeper, despite beating his arms desperately. Even if BoJack doesn’t learn to swim in the final episode releasing today, he did give us a sense of hope, reassuring us that we weren’t sinking alone. Here are our top moments from the show.

PS: Thank you BoJack. Horseman, obviously. I hope you get a happy ending.

BoJack’s need to be liked is one of the most relatable things about the character. This heartbreaking moment from the first season sets the tone for just how real the show can get, when a vulnerable BoJack acknowledges his sadness over Diane’s dark portrayal of him in her book, asking if it is too late for him to mend his self-destructive ways. The scene becomes tougher to watch as BoJack begs her to tell him that he is a good person. We watch in horror as Diane uncomfortably holds her silence, saying much more than she could have with her words.

Friendship Forgotten
Still from the series

While BoJack’s perpetual rudeness towards Mr Peanutbutter seemed to be due to his rip-off of BoJack’s show, we got a clearer picture when Mr Peanutbutter angrily confronted him, asking why he never liked him. What followed was BoJack’s painful confession... that despite having a hit show, a lot of money, his dream movie and every other tangible ‘good’ thing in the universe, he wanted to feel good about himself, like Mr Peanutbutter. And sometimes, he thought that he wasn’t capable of feeling that way.

Among all of BoJack’s ill decisions, this one is truly tough to forgive. Feeling trapped in life, he runs away to New Mexico and revives his friendship with Charlotte, the one that got away. While it’s painful to watch Charlotte asking him to leave after he kisses her, saying that he makes her extremely sad, what horrifies us the most is BoJack getting caught with Charlotte’s underage daughter Penny, barely a few minutes later. We can’t help but ask ourselves if BoJack is truly beyond redemption as the end credits roll.

Sarah Lynn
Still from the series

A Horse Out Of Water

A masterclass in TV writing, the episode hardly has any dialogues, as BoJack frantically tries to apologise to Kelsey for getting her fired. After a series of unsuccesful attempts, including one involving a beautiful detour to return a stranded baby sea horse to his father, BoJack finally manages to write a note which gets smudged before it enters Kelsey’s hands, making us all regret the people we let go of, and resolving to hold on to those that matter. In the show’s trademark fashion, it keeps the most gut-wrenching punch for the end, as Kelsey drives away in a cab, just before BoJack finds out that he could speak all along.

Accountability has always been a major theme of the show, particularly when it comes to BoJack denying hurting those close to him. While Todd generally lets BoJack’s disregard for his feelings slide, upon finding out that he slept with Emily, he drops some truth bombs that are uncomfortable for both BoJack and us to hear. This scene is the first time someone tells BoJack the harsh truth — that his troubled childhood, declining career and drug abuse don’t excuse him for his terrible actions and that he needs to stop apologising and be a better person.

A pivotal point, this changes the entire trajectory of the show. Sarah Lynn embodies every teenage popstar who got fame way too early, and did not know how to process it, ending up in a cycle of self-destruction. BoJack and Sarah make a series of bad decisions in a drug-fuelled stupor, which gives them both a recurring reminder that they can’t outrun the consequences of their actions. As BoJack looks at the sea of stars in the planetarium and remarks that in this vast universe our past and future don’t matter and that only the present is of any consequence, Sarah breathes her last, leaving us to wonder if BoJack was actually been spared because he has more actions to pay for, before his inevitable doom.

Princess Carolyn
Still from the series

Overthinking is something we all do. The show doesn’t pull punches while showing just how much self-hate it brings, especially in BoJack’s case. In a rare moment of parental responsibility, when Hollyhock tells BoJack about the voices in her head that call her ugly and unlovable, and asks if they ever go away, his rueful smile and heavy ‘Yeah’ speak volumes in a scene that has very little dialogue.

It Will Work Out

No one has had it tougher than Princess Carolyn, and yet no one has had more resolve than her to pick herself up, brush off the bruises and keep walking. We get to know how she does it every day, when BoJack, in the middle of a rant about his terrible day, is interrupted by her. Having just gone through a break-up, she casually remarks that during her bad days, she imagines her great-great-great granddaughter telling her class about her and how everything worked out in the end, because it gives her hope that things will, indeed, work out for the better.

Everyone’s Got A Past

One of the key philosophies behind the show is that nobody is perfect, and every character has a layered backstory, leading them to act the way they do. This is true for BoJack’s mother Beatrice Horseman, too, who has been largely shown as a negative and bitter character. In an episode full of overwhelming emotions, we see how Beatrice’s bitterness comes from her traumatic childhood and toxic marriage, both of which led to her dreams being crushed and her heart is too fragile to love anyone, most of all her own son. However, in a rare moment of connection, the episode ends with BoJack showing her compassion in her demented state, giving her the illusion that she is eating delicious ice cream in Michigan, instead of the sad reality that she is in a home, all alone.

New BoJack
Still from the series

No one has captured how fatiguing maintaining a relationship can get — especially when one feels trapped on the inside — better than Diane, who seems to be the most mature person on the outside. While the signs were there from the beginning, we realise just how far Mr Peanutbutter and Diane have drifted when she breaks down, lamenting that she’s tired of squinting just the right amount so that their differences line up. The saddest part is how relevant this is in modern-day relationships where people end up staying together despite being extremely unhappy.

Widely regarded as one of the greatest episodes of the show, the camera rarely leaves BoJack as he delivers his late mother’s eulogy. Will Arnett’s outstanding voice-acting makes BoJack’s inner pain and conflict come alive as he grapples with the years of abuse he faced from his mother and admits that despite holding on to hatred for years, some part of him always hoped to mend their relationship, a chance that is lost forever now. The final tear-jerking twist can’t be written about... it demands to be seen.

After five extremely pessimistic seasons, we finally got a season that felt like a warm hug, culminating in this scene where BoJack accepts his flaws and imperfections in the most overt manner. He stops dyeing his hair, tones down his clothes and finally embraces his age. Not only is this grey BoJack a symbol of greater maturity and moving away from his past toxicity, but also of self-acceptance, something he lacked throughout the run of the show. We just hope he isn’t too far gone for redemption.