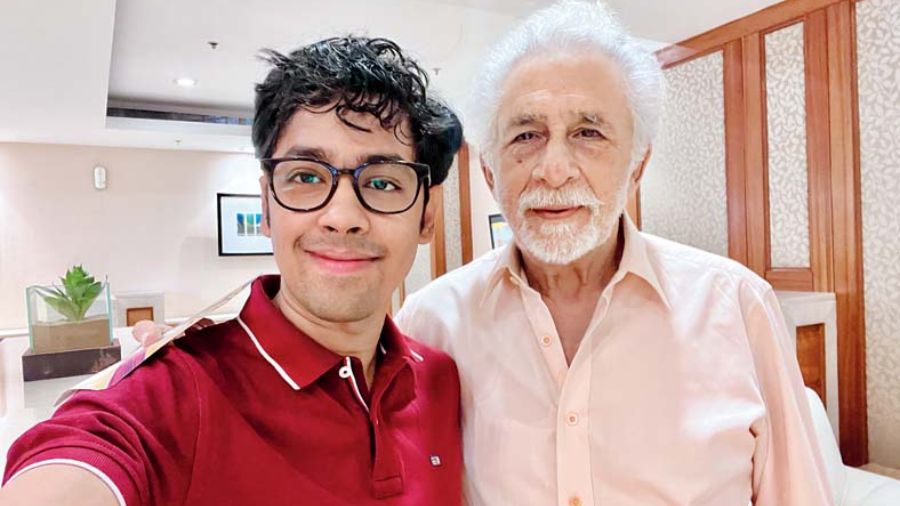 I admit to a certain trepidation at agreeing (when invited as chief guest) to have to sit through the premiere of Swapnasandhani’s production of Hamlet in a Bengali translation by Chaiti Mitra, at the Academy of Fine Arts in Kolkata. Hoping I would at least enjoy the sight of well-muscled Bong calves and thighs in tights but largely due to my immense admiration for Koushik Sen as an actor and affection for him as a person (I hadn’t yet seen his directorial work) and the fact that Riddhi, his son, watching whose magic turn in the film Nagarkirtan made me feel pretty inferior, would be playing the role, I said yes.

For any actor, playing Hamlet is the Holy Grail of acting as it was for me at one time. I never did get to play him though. Memorising, “Oh that this too too solid flesh would melt”, in Class IX in school, studying the play in college and much later, as a pro, being asked to play Claudius and turning it down in an amateur production in a dreadful Hindi/Urdu mishmash of a translation decades ago, then finally playing Rosencrantz with Peter Brook in Paris at the fag-end of the 20th century was the closest I ever came to playing the brooding Dane.

But having read and watched the play several times since (and having been equally puzzled each time, except that I became convinced that H was very far from being a brooder, he was an impotent raging wounded tiger) I was intrigued by what Koushik would have Riddhi do in the role and how, and if, he would pull it off so I desisted from asking any questions. I had dinner with the family the night before the opening and sensed not an iota of nervousness, just a quiet confidence in what they had done.

There was no mention of Koushik’s wife Reshmi, almost inconspicuous amidst these young enthusiasts obviously loving the work they were doing whether on or off stage, being in the play and she turned out to be the real surprise package; playing a most gracious hostess that night, and an excellent Gertrude the next.

Counting the numbers on stage at the curtain call, however, it either seemed there were very few people offstage, or the stage hands had been doing bit parts here and there! And all very competently. Before the curtain went up I was mentally shuddering at the possibility of blonde wigs, tatty attempts to create Elsinore and a predictable tableaux but the surprises began straightaway.

No sign of castle battlements, no smoke seeping in through the wings to the accompaniment of hissing smoke machines announcing the Ghost’s presence. (To avoid being a spoiler I will not reveal how the Ghost appears) There’s no chamber music announcing the arrival of another GRAND play, no pretence at classicism, no “you’re about to watch a tragedy about a man who can’t make up his mind”, the glibbest definition of the play I’ve ever heard. A gigantic skull is centre-stage and on and around it hangs a whole lot of junk, some of it quite unnecessary I thought, seeming to decorate a portrait of WS. It took a few minutes to register that it was all eerily suggestive of Hamlet’s cluttered mind. In a cocoon-like tent a person is asleep, all you see are bare legs and underwear. A rather large telephone occupies downstage centre and all around the cocoon, instead of the dreary, “What, has this thing appeared again tonight?” scene which opens the play, white-faced actors are prancing around reciting in this Midsummer’s nightmare of the man in the tent (not woman, the director made sure, the figure either had a cod-piece inside or he’s very well endowed!), the arrogant instructions Hamlet gives the actors in his speech to them after having just watched them perform.

The words in that passage are beautiful and he says things all actors should abide by but he’s just seen exactly such acting by the Player! It always reminded me of Imran Khan’s arrogant/pleading speech after his team won the world cup “for him”. Being practically ignorant of the Bengali language, the significance of placing the scene where Koushik did, only hit me during the interval when what the actors were saying was explained to me. I heaved a sigh of great relief that this tedious scene which occurs later in the play, and at the wrongest time I’ve always thought, would probably be excised and it was!

Playing it in rehearsal clothes, far from distracting my mind from the text to the texture (and I mean language-texture as well), the besetting sin of almost every Shakespeare I’ve seen anywhere in the world, in fact brought me closer to the play. It’s quite all right for Hamlet to be in tattered jeans and shit-kickers carrying an “Easy Rider” knapsack; he’s in college but Claudius, even in rehearsal clothes should have been wearing something more in consonance with the status he has bestowed upon himself; even our self-styled ‘Fakir’ wasn’t coy about wearing a suit embroidered with his own initials.

Rehearsal clothes should not of course be costumes but strongly suggestive of them — I feel it affects the actor’s behaviour. The purists who will probably be offended by the jettisoning of the pentameter (which I detest in any case) and the alterations in the text may not agree, arguing that I don’t speak a word of Bengali, I concede that; though I too have been accused of “blasphemy” for altering major sections of Julius Caesar in a production I did years ago.

The editing in this Hamlet was well thought out, dispensing with extraneous and indulgent scenes and was helped in moving the action forward by the translation which even to a non-Bengali speaker seemed to capture the spirit of what Shakespeare intended, though I did wish that the few probably untranslatable phrases (I mean how the hell do you translate “… a special providence in the fall of a sparrow” or “more kith than kind” or “If it be now ‘tis not to come, if it be not to come it will be now…..” and full marks to translator Chaiti for recognising that) retained in English were spoken with better cadence. But these were minor niggles in an otherwise truly engaging presentation.

In many of Shakespeare’s plays and particularly his tragedies the eponymous part is always loaded with strong tour-de-force possibilities for the actor playing it. They are starring roles and were probably written for particular star actors, keeping their specialities in mind. Seldom will you hear of a celebrated production of Lear or Macbeth or Hamlet with an unknown actor playing him, and this often makes actors who have the “Ah! here’s an opportunity to display all my wares” attitude indulge in orgies of the bombastic acting they imagine existed in Shakespeare’s time — a fatal flaw and one which makes people uneasy watching anything by the bard, and the less said about the way he is taught in school the better.

These may be factors but it is true that the main curiosity about watching a play by WS (at least for me) is concerning who is playing the main part. If it had been an actor I hadn’t seen and been impressed by, I wouldn’t have taken the chance, but it wasn’t.

I’ve always imagined Hamlet as an adolescent — some of the things he does are pure juvenilia, though whenever I watch the play, his age ceases to matter. There is an excellent rendition by Tony Richardson with Nicol Williamson playing him as a bespectacled, bearded, white-streaked research scholar and of course everyone knows of Sarah Bernhardt in 1899. For me, Riddhi Sen’s performance would have benefitted from a little more stillness and silences but overall it is a pleasure to report that what I watched was a confident actor with a secure understanding of his craft that I, for one, certainly didn’t have at the age of 24. All I had was the unharnessed, roiling energy and complete sense of anarchy he brought to the part. I would have preferred an unhurried quality, but his neurotic, restless, unsentimental performance was strangely moving.

Koushik, who straddled the responsibilities of not only designing the set and choreographing the action but also of directing and playing Claudius, had a tougher job on his hands but he coped, not drawing attention to himself or his brilliant mise en scene, helped immensely by Sudip Sanyal’s adventurous lighting scheme, and not playing Claudius as a villain at all but rather as an insecure man not quite sure of the implications of what he has done. The emotional charge was more than adequately provided by Reshmi Sen as Gertrude and Surangana Banerjee, particularly in the most difficult scene of Ophelia’s madness was as convincing as any I have seen.

Wonderful as it was watching actors perform with joy and gusto instead of treating it as a job I did find myself wondering about the flexibility of the production. The Academy’s theatre suited its design perfectly but I did have doubts about other venues. Koushik should not forget that “when Shakespeare played there was heard the bright unclouded summer of the word” in the theatre and his actors performed on a bare stage. Perhaps he could, having got hold of the guts of this play, attempt some experiments with it so that it gets across to those who despise or are befuddled by Shakespeare — schoolchildren for one! This production deserves to be seen by all; lest we forget WS wrote popular plays for the common man; that the intelligentsia co-opted him is another matter.