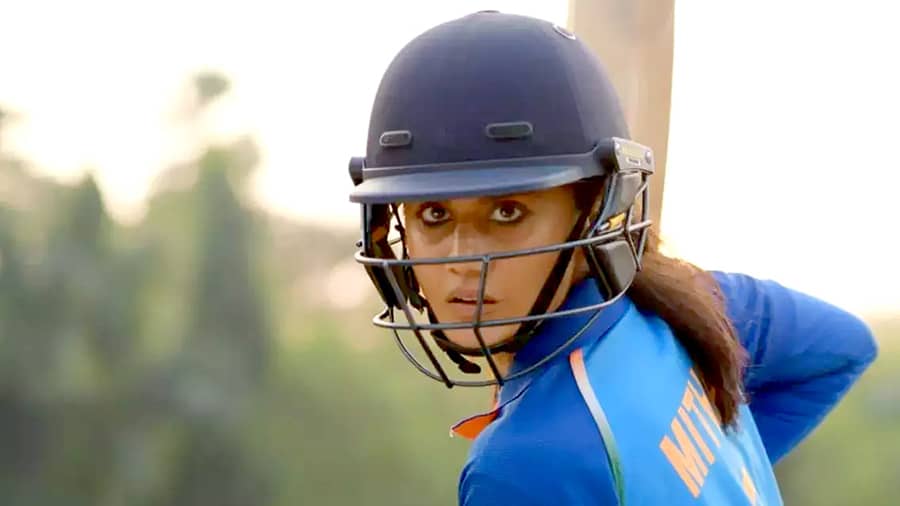 With Srijit Mukherji’s Shabaash Mithu hitting theatres last Friday, Bollywood served up its latest version of a biopic that celebrates the journey of one of India’s most decorated cricketers. For the first time ever, this cricketer was a she rather than a he, with the remarkable story of Mithali Raj taking centrestage.

Chosen to play Mithali, Taapsee Pannu underwent rigorous preparation for the film, including batting for hours to hone her cricketing skills and ensure that Taapsee the batter did not look out of place in a film about India’s greatest female batswoman of all time.

While Taapsee does, to some extent, replicate Mithali’s determination and discipline in the film all the while making the latter look more defiant than in reality, how well does she mirror Mithali’s signature shot? And how does Taapsee’s effort compare with those of her Bollywood peers who tried to recreate the most famous shots in Indian cricket on the big screen? The Telegraph Online finds out.

Shabaash Mithu: Taapsee Pannu can hit a sleek cover drive, just not quite like Mithali Raj

In trying to show Mithali as a one-woman wrecking ball instead of a quiet and composed agent of change, Shabaash Mithu sacrifices sincerity at the altar of sensationalism. No wonder then that Taapsee goes through much of the film manufacturing Mithali instead of matching her.

As far as the on-field action goes, Taapsee looks comfortable in how she carries herself across the 22 yards. Her shot-making, while not given as much screen time as the films that are to follow on the list, is technically strong and easy on the eye. The only problem: it looks nowhere close to how Mithali would bat in real life.

Take Mithali’s cover drive, which she arguably executed better than any woman on the planet, as an example. Anybody following Mithali’s career closely would know that she prefers to hit her cover drive off the back foot, making it look midway between a push and a punch. In Shabaash Mithu, that is not a shot one can remember Taapsee playing. Srijit opts for Taapsee to play the cover drive off the front foot, which would hardly have been a cardinal sin had it incorporated more allegiance to Mithali’s idiosyncrasies.

As an immaculate technician, Mithali’s foot invariably landed near the pitch of the ball, before the bat came through like a smooth sabre instead of a bludgeoning hammer. In the film, Taapsee extends the cover drive far higher while also playing a fair bit away from the body, with not enough footwork to faithfully parallel Mithali. Ironically, Inayat Verma, who plays the young Mithali, makes the cover drive look more like something Mithali would play as a toddler than Taapsee, whose version of senior Mithali can hit a neat cover drive, just not quite like Mithali herself.

In terms of fidelity and finesse, Sushant Singh Rajput set the benchmark in Bollywood biopics in M.S. Dhoni: The Untold Story by cloning the movements of India’s most successful limited overs captain to the tee. From the suaveness of Mahendra Singh Dhoni’s body language to the elaborateness of his pre-delivery ritual, Sushant captured every minute detail with precision, a result of spending days with the man himself and understanding not just Dhoni’s physique, but also his psyche.

In terms of the helicopter shot, an MSD innovation that no cricketing manual teaches how to play, Sushant got the flourish and whip of the bat almost spot on, even if the follow through and the steadiness of the head left a tiny bit to be desired. While the helicopter shot seemed natural in the scenes depicting a young Dhoni smashing a tennis ball, the somewhat obtuse bat lift became a glaring departure from the real thing during the emulation of Dhoni’s signature shot in Indian colours. Having said that, top marks to SSR for attempting a shot that most professional cricketers, let alone actors, struggle to perfect.

Take a freeze-frame of Kapil Dev and Ranveer Singh hitting the former’s trademark Nataraj shot, more conventionally called the pull, and it is difficult to pinpoint any major differences. Ranveer, ever the method actor, shed his own skin for his role in ’83, embodying Dev in both matter and spirit.

For Dev’s iconic shot, which involved a bent left knee transfixed mid-air, Ranveer took separate training from the World Cup-winning skipper, with the final product in the film emerging as a just reward for diligence. From the sway of the hips to the lifting of the knee to even the grimace on the face, Ranveer made the Nataraj come alive in high definition.

However, if one were to nitpick, there are two small areas where Ranveer veered from the original. First, Dev used to lean back a bit more while executing the Nataraj, putting more weight on his back foot than Ranveer did in the film. Second, Dev would usually pull the ball by getting more in line with it than what Ranveer did in the film, which can be easily explained by the fact that Ranveer’s pulls were focused more on the Nataraj pose than in the preceding trigger movements that made the shot possible in a real match.

Azhar: Emraan Hashmi copies the laziness but not the elegance of Azhar’s flicks

At first glance, nothing about Emraan Hashmi screamed Mohammad Azharuddin in the trailer of Azhar. And even if one were to pore through it, nothing about Hashmi really looked and felt like Azharuddin at the end of a clumsy film. In some ways, Hashmi’s stature (he is a good four to five inches short of Azharuddin) and his body type made him the wrong choice to portray the mercurial batting maestro.

This reflected most strikingly while Hashmi was shown on screen playing Azharuddin’s exquisite flick shots. Nothing about Hashmi flicking the ball remotely reminded one of Azharuddin’s lazy elegance (okay, maybe the lazy part was alright). For starters, Hashmi got Azhar’s stance woefully wrong, which meant that whenever he would shuffle across his crease to play the flick, everything from his bat swing to his wristwork to the way the face of the bat turned, looked wrong. To make matters worse, the cinematographer opted to show Hashmi flicking the ball either as a long shot or from a side-on angle, which did the film no favours as far as imitation was concerned.