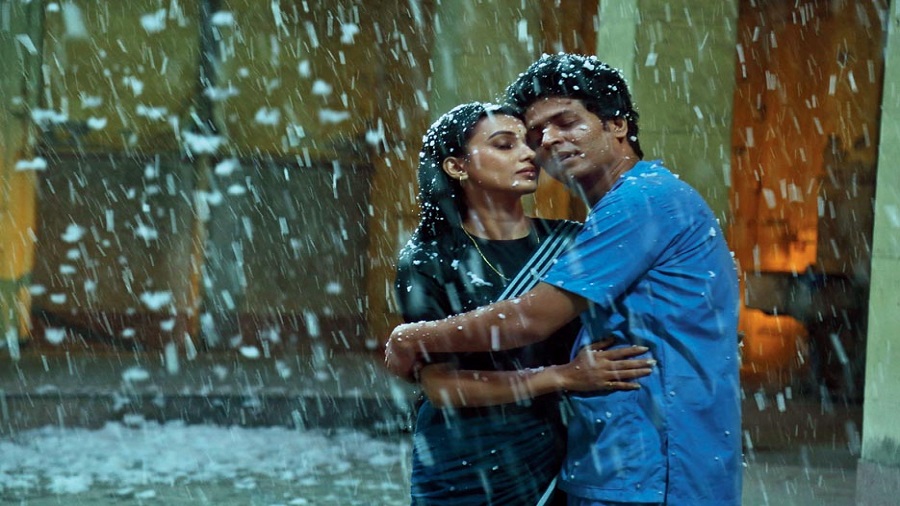 A moment from Dracula Sir, which releases on October 21. Dracula Sir tells the story of the bloodstained rise of a Bangali vampire and his search for love and revenge
Sourced by the Telegraph
Arindam Chatterjee   |   Published 12.10.20, 09:39 PM

Mimi has a certain kind of melancholia, which strangely has always been overlooked,” director Debaloy Bhattacharya had told The Telegraph before the shoot of his film Dracula Sir. Now that the trailer is out, we know why! Of course, Manjari (Mimi) in Dracula Sir (starring Anirban Bhattacharya and Mimi) is more that that... she is feisty, determined, focused, and has an element of mystery about her. “It’s a new experience for all of us… a different journey. I’m really excited. I was waiting for the right film to come my way and this film is the one. There is a sense of familiarity since my character looks like Pupe from Gaaner Oparey,” smiled Mimi. A chat with The Telegraph...

What images come to mind when we say, ‘vampire movies’?!

The Twilight films. Robert Pattinson as the vampire was a dream for many teens (laughs), and some really pined for a boyfriend like him at that point of time, someone who would fly around like him. I also used to like Jacob (a shape-shifter or werewolf). Then there was the movie Van Helsing. I used to read a lot of books and magazines about Dracula.

Have you had an encounter with Dracula?!

I have seen a man dressed as a Count walking around in Edinburgh (smiles)! I have also gone for a late-night ghost tour in Edinburgh after dinner. There I got to hear ‘stories’ of Count Dracula, who had made his ‘presence’ felt.

Did you feel scared?

No! I was part of a group and we all were together. We went to a graveyard in the middle of the night. It was pitch dark. We could clearly hear the rustling of the leaves from maple and pine trees. We were shivering because it was so cold... it was December.

Growing up, we all have listened to many fairy tales and stories of ghosts. Did you have such ghost story sessions in your home in Jalpaiguri?

My Mama used to tell us ghost stories in the evening on rainy days. The atmosphere would match the content when there was a powercut. So we kids, all my cousins, would all be huddled together in a room with the light from a candle illuminating our faces. It was dark outside with the heavy rain and the sound of the wind outside the window. After a while some of us would cover our faces with our hands. Some would try to scurry under beds, only to be reminded that it was not a safe place! Then we would get to know that a couple of the otherworldly creatures might be listening to the stories from outside the window, and immediately the ones who were sitting by the window would scamper to a safe place on the other end of the room! We had so much fun. The memories are so vivid. After those sessions everyone would think twice before going to the kitchen to get a glass of water!

Have you ever been part of a planchet?

No, I have never taken part in that. What if they arrive and don’t leave?! I am scared of ghosts, I know they don’t exist, but still I am.

How about going into a haunted house?

There were two famous haunted houses where I lived. We grew up on stories from those houses. One day, my Didibhai took me and one of my friends to the shupuri bagan behind the house. Then suddenly I didn’t see them anywhere around me. They were not there! They had left and I had got stuck among the kata! And for that brief period of time I was thinking that some force was not letting me go (laughs). I just panicked! I must have been in Class V or Class VI.

You watch a lot of horror films!

For the excitement, thrill and the element of fear in them. I never watch them alone. Someone has to be there. I was a fan of Vampire Diaries! A vampire is a dangerous thing that can be tamed by love.

Does that happen in Dracula Sir?

I can’t reveal it now! For that you have to watch the film! I can say that love is a language that everyone understands.

What drew you to the film?

I loved the storyline and my character. It really excited me. I wanted to do something different after a gap of a year. It took me only a few minutes to say yes to it.

Tell us about your look in the film...

The look is inspired from Pupe (from Gaaner Oparey). It is a journey that I have already gone through. We had a strong look reference but the character is totally different.

You speak in a low, more slow-paced way in the trailer. What inputs did you get for dubbing?

Yes, Debaloy was there. He wanted me to underplay... and give her an undertone. Manjari is more serious. She has seen a lot of life at a young age. There is a lot inside her, which is why she speaks the way she does. I speak quickly and most of my characters do that too.

But here it was different. I enjoyed this challenge, and I am happy that I could come up with something new and match the director’s vision. Debaloy has done an amazing job with the film.

We see you shooting a gun in the film. Did you ever want to learn how to shoot for real?

I want to learn it... and horse-riding. I can ride a horse... but I cannot gallop it. I would love to do that some day. In fact, I had a nickname as a kid... it was Phoolan Devi! I was quite rebellious.... someone who would always protest for the truth. And I will always stand up for the truth and call a spade a spade. I have always been vocal about things. When I started out in this industry, a couple of people had commented on various things... like not to colour my hair or not to get a tattoo. I went and did yellow highlights in my hair and also got a tattoo. I have always believed in myself and in what is right.

You proved them wrong...

I don’t know that but I proved myself right.
From protesting to raising my voice, I believe in what my heart tells me to. I listen to my heart. I have always tried to be true to myself. I have never been diplomatic. After everything, one has to stand and look at the mirror. I have always been honest.

What would you like to ask Mimi? Tell t2@abp.in