‘It’s high time that women are at the centre of stories, and not just there as victims or avenging angels’ says the actress 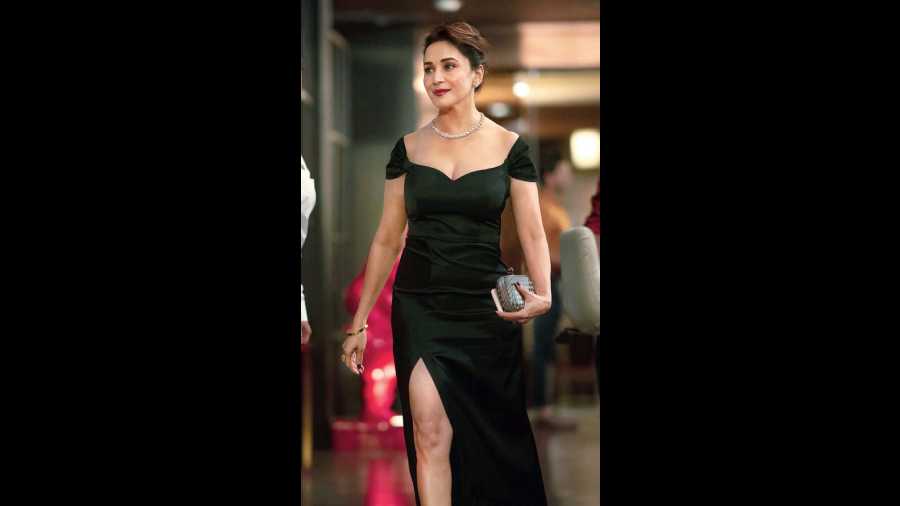 Madhuri Dixit frontlines The Fame Game. The eight-part series that’s now streaming on Netflix has the actor playing a version of herself — a Bollywood superstar with strong family values — but with a difference. Dixit’s Anamika Anand goes missing one morning, with The Fame Game combining mystery, thriller and family drama in one. With the series marking her digital debut,

The Telegraph caught up with the always ravishing Madhuri for a chat. Accompanying her was Sri Rao, the showrunner and co-writer of The Fame Game.

Sri, what triggered the idea of The Fame Game?

Sri Rao: Well, I was inspired by Madhuri Dixit herself! I wanted to create a role and a story for her that would rise to the level of talent that she has as an actress. Through the years, we have seen her play so many different roles in such iconic movies and I have been a huge fan of hers through the course of her entire career.

The idea of The Fame Game was, ‘Let’s create a story for her that allows her to bring more than one side of herself to one role’. The Fame Game allows her to be sad and joyful, angry and strong and vulnerable. She’s performed brilliantly and this is a treat for everyone because we get to see Madhuri Dixit do what she does best, which is entertaining brilliantly.

Madhuri, you were the starting point for this show. That must be such a high...

Madhuri Dixit: Oh, I am joyous. I take it as a compliment for all the hard work I have put in all these years and the legacy that I have tried to create. It’s kind of a nod to that.

But when Sri says that, it also brings in a lot of responsibility because I have to really give my best. I really enjoyed reading the script, the mystique and the enigma that was created, and yet at the core of everything is the family and the relationship and the dynamics in a dysfunctional family. I think that’s very beautifully brought out, and that’s what creates the mystery when she disappears. It moves from, ‘Where is Anamika?’ to ‘Who is Anamika?’. I really liked the script and that’s what made me do it.

Anamika Anand is a superstar and a strong family person. Does the resemblance end there?

Madhuri: I generally try and create a character in my mind and if there are some commonalities between us then that just helps. Anamika is a big star and I am a big star too, and she is a family-oriented person and so am I. But the similarities end there. Her life is very different from mine... and thank God for that! (Laughs the Madhuri laugh) She has a lot of strife in her life and it’s so beautiful to get into that role and convey the pain and the joy and whatever else she feels. It comes from a place of deep longing in her life, I feel, and so, I really enjoyed playing to that.

Sri, The Fame Game may well be described as a thriller, but it combines many genres within a deep emotional core. What were the challenges of combining so many threads and so many genres?

Sri: The biggest challenge for me was the mystery component of the story. It’s a very intricate puzzle and there are a lot of pieces to it. So, my co-writer Nisha Mehta and I spent a lot of time making sure that every single story that we were telling, with every character along the way, had a connect. Like when you watch the show, you will feel that certain threads have no connection to the central story of Anamika going missing, in the end, you will find them all seamlessly connected. Everything just converges back together, and you will realise that there is no extra bit of information that we have given you that is unnecessary. It’s a very tightly-wound story. That was very challenging, as well as very exciting, to create.

I am not a mystery writer... I write relationship dramas, family dramas and so the emotional stuff of the show was much easier for me, while the mystery bit was a fun, new challenge.

Madhuri, having worked through the decades, since the ’80s, how do you look at the Indian entertainment space now?

Madhuri: Well, I think it’s high time that women are at the centre of stories, and not just there as victims or avenging angels. Women need to be written as people and characters, and not as props. People who are thinking, feeling, of different professions, women who are larger-than-life in their own way, and who contribute to affecting the lives of people around them.

In the West, we see how so many roles have been created for Nicole Kidman, Jennifer Aniston and all these lovely ladies... they are doing such good work there. I have watched shows like The Crown, The Queen’s Gambit where women are central to the story. I feel it’s a great time for women in cinema, especially with the advent of OTT. Women are being cast in varied roles where different kinds of emotions come to the fore and we are starting to look at women in a different way.

Madhuri, not only has Bollywood opened up in terms of opportunities but even the way it functions today is very different from the ’90s. What are the biggest changes that you see now?

Madhuri: When I first started working, the only entourage was the make-up artist, the hairdresser and my mom. She would always come with me. Those were the only people on set, but today, there is a whole village to create and maintain a star! (Laughs) Which is okay because that’s the need of the day. Today, you need to have a photographer, a social media guy, your stylist.... Things are much more professional now than it used to be.

When I started working in movies and even later, we never got bound scripts. We would have dialogue writers writing the dialogues at the last minute while we were waiting on set, all dressed up! (Laughs) We had to learn the lines there and then and perform them.

Now you have time to prepare for a role, you can do one film at a time and concentrate on that and be immersed in it. You can finish it, go on a break and then do another film. At that time, we used to do two shifts in a day! It was just mayhem, but even through that there was spontaneity and we made some great films. Now, there are so many things we didn’t have... like vanity vans and all the other comforts that we didn’t have at that time.

Coming back to the series, what does the title The Fame Game  mean to you?

Sri: The ‘fame’ bit of it, of course, implies the glitz and the glamour and the aspirational quality that all of us on the outside look up to with starry eyes. The idea that people will love us if we are famous... fame is actually about love, really. The love and adoration of the public. And then the ‘game’ part of it is what lies underneath the fame — the game to achieving fame, the game of maintaining it and the game of tearing down others to build oneself up. It’s an interesting play on words, I think.

Madhuri: Everyone works for fame, and when fame becomes an integral part of life, there are some who will do anything to maintain it. That’s the game that everyone played. I had once said that all our lives we work towards achieving fame and when we do get it, most of us hide behind glares.

Madhuri, have you ever regretted being as famous as you are?

Madhuri: It’s great to be recognised and loved because I have worked for that. But I am not obsessed with it. I lived in Denver (in the US) for so many years and if I walked down a street and no one recognised me, I wouldn’t say, ‘Oh my God! What’s happening?! No one recognises me’. I have never been like that. When I was in Denver, my life was totally different... my husband, my kids.... I was in a very happy space. Initially, it never bothered me that people didn’t recognise me, but then slowly my American neighbours started getting to know who I am and they started watching Bollywood films! (Laughs) One of my neighbours was a lawyer who loved musicals and so I gifted him some Bollywood musicals. And then he was like, ‘Oh my God! Now I am a fan of Bollywood!’ (Laughs)