The Calcutta boy plays one of the primary characters— opposite Aditi Rao Hydari’s Nusrat — in Ribhu Dasgupta's directed movie, now streaming on Netflix 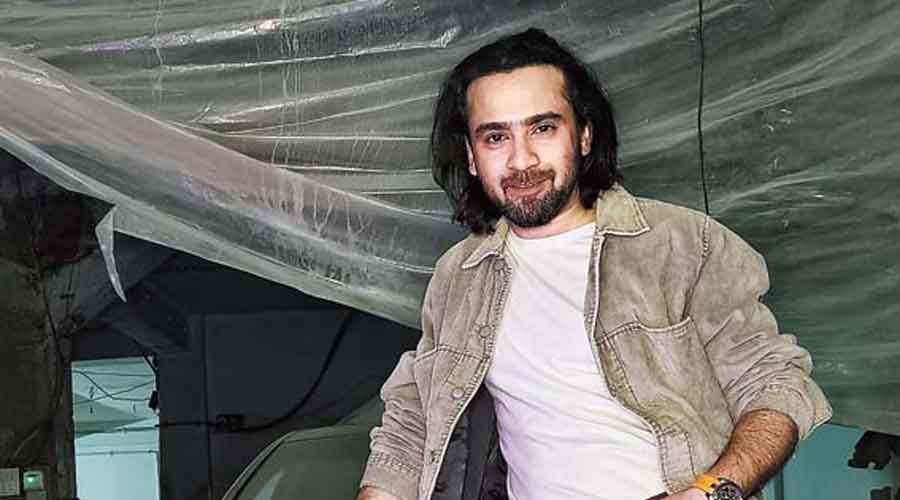 City boy Shamaun Ahmed plays one of the primary characters — opposite Aditi Rao Hydari’s Nusrat — in The Girl on the Train, now streaming on Netflix and also directed by another Calcutta boy, Ribhu Dasgupta. t2 caught up with Shamaun on his big break and the road ahead.

Given that it’s your big Bollywood break, was there an initial sense of disappointment when you found out that The Girl on the Train was headed for a streaming release?

I wouldn’t say I was disappointed... that’s a very big word. Yes, this was going to be my first Hindi theatrical release. But I believe in destiny, and I am sitting here and thinking, ‘How will this benefit me’ and I know eventually, God will show me how.

I am happy that with a streaming release it will reach so many countries at one go. I am grateful to OTT because actors like me who don’t want to do television and wouldn’t get films in a hurry, now have the opportunity to do similar, or even bigger stuff, on OTT.

I am fairly new, the other cast members are established and are doing a lot of work. But after the trailer came out, I became very nervous because the buzz was quite insane. Because of the trailer, my Instagram followers bumped up by a couple of thousands, an effect which I hadn’t seen since Bard of Blood (Shamaun starred as a key character in the 2019 Netflix web series). I haven’t had a release since then anyway. The Girl on the Train is a niche film, so we didn’t really expect this kind of a buzz. It’s now translated into a lot more responsibility. It’s not going to be a few thousand cinema halls, it will be the whole world.

Bard of Blood was, of course, also directed by Ribhu Dasgupta. How did you bag this film?

I was in Calcutta, and I knew that the cast and crew of The Girl on the Train were then in London shooting the film. At that time, I was in talks about doing a three ad film deal. I got a call and Ribhuda asked, ‘London aayega?’ He said that he was taking an English actor for the part, but eventually decided to talk to me. Ribhuda asked me if I could leave the ad deal, and I spoke to the agency and they graciously let me go. Within 10 days, I was in London shooting for the film.

For an artiste, it’s very significant when your director repeats you in his very next project. That made me a lot more confident about my craft. I am grateful to Ribhuda for the opportunity.

Had you watched the original Hollywood film, starring Emily Blunt, either before or after starring in the Hindi version?

I actually had watched it a couple of years ago when it released. I like to get my script in my hand, but with this film, Ribhuda’s approach was very different. He said, ‘With this one, you have to trust me’. He sent me a rough idea of the script and then I watched the Holly film again to see what my character was meant to be doing. But I knew that our film would be quite different... Ribhuda has put in a lot of his own, whether it’s the detailing of the characters and everything else too. Ribhuda has told me that this film will surprise even the biggest The Girl on the Train and Paula Hawkins (the author of the book on which the film is based) fans. Even when we were shooting this film, we knew it would be quite a ride.

What was it like shooting in London with the ensemble cast?

I have been in the industry for a while and have interacted with a lot of good performers. But when you know that you will share the frame with them and will be watched by the whole world, then a sense of nervousness obviously creeps in. When I reached the set on the first day, I walked into Totada’s (Roy Choudhury) room by mistake, instead of mine. We were shooting in Surrey and that was a very calm room on a set that was going fully mental. I was about to introduce myself to him, but he knew who I was, and he said, ‘Aamra toh ek desher chhele!’ For an actor to be recognised by a senior artiste is always very special.

Then I met Parineeti (Chopra) who was also damn cool. Aditi (Rao Hydari) was doing a scene with me in which I had to be rough with her. There were people on set who told me I had to be very careful, but I was like, ‘This is a scene that can’t be cheated. The camera is really close to us’. We did two takes and then Ribhuda told me, ‘Shamaun, ki korchhish? Do what you always do’. And that gave me confidence and a sense of belonging that my director is aware of what I am capable of as an artiste, and the scene worked out. Aditi later asked me, ‘You’ve done this before, right? This is not your first film’. I told her I had been acting for a while and she was like, ‘Good, man’. That, in itself, set the pace for me.
There were such warm, loving people working on this film. If they would head out after work, they would always invite me. Avinash (Tiwary) and I would chill out a lot together. Jim (Sarbh) and Harshvardhan (Rane) were also staying in the same hotel and were shooting Taish at the time. Jim had told Avinash about a certain bar in the village which was near a river. After that, Avinash and I had quite a few romantic evenings together, staring at each others’ faces and having gin and tonic! (Laughs)

After we came back from London, we had the Bombay premiere of Bard of Blood. Parineeti had come for the premiere. I was in a corner stuck with a crowd. She saw me from a distance, worked her way through the crowd and gave me a tight hug and said, ‘Congratulations buddy, this is your big release’. My eyes actually welled up, it was such a nice gesture. There were some amazing bunch of actors on this one. Kirti (Kulhari) and I, of course, had also worked on Bard of Blood together.

How are you planning to use this film to further your career in Bollywood?

I have had only one release every year for the last three years. There are some friends who I started with and they have become big stars and they tell me, ‘Why are you not here with us?’ And I am like, ‘Because you deserved to be where you are’. I did get opportunities, but I probably didn’t take them because I wanted to be ready for them. Somehow I felt I wasn’t, and that’s why I stayed away. Even now, I do a project only if I think I can do justice to it. I never say I am talented, I always say that I put in a lot of hard work. I am always going to be the guy working the hardest on that set, or in that frame. That I am sure about.

Adil bhai (Hussain, actor) has been aware of my journey, of me not being confident enough about my craft, or even my looks. That is also something that keeps me on my toes all the time. So Adil Hussain told me, ‘Ei nyakamo ta chharo and start working’.

Honestly, I am what I am because of what Calcutta’s advertising fraternity gave me. All the love and support from senior photographers as well as directors like Tonyda (Aniruddha Roychowdhury) and Anikda (Dutta) who gave me my first ad films. That gave me confidence and that’s when The Big Bong Connection happened and then came Bard of Blood and The Girl on the Train.

All these years, in Bombay, I have been offered ‘hero’ type roles of beating up 10 goons at a time by smaller studios, and there are some bigger studios that offered me roles that I didn’t like. In Calcutta, I haven’t worked in some time because I don’t get offered roles of consequence, probably because of the way I look (laughs). Since I play one of the primary characters in The Girl on the Train, I am hoping that in Bombay, substantial roles will now come my way. The fear of regret has brought me back to acting and now I plan to pursue it seriously.

Shamaun in Bard of Blood

Since I play one of the primary characters in The Girl on the Train, I am hoping that in Bombay, substantial roles will now come my way. The fear of regret has brought me back to acting and now I plan to pursue it seriously

I do a project only if I think I can do justice to it. I never say I am talented, I always say that I put in a lot of hard work. I am always going to be the guy working the hardest on that set, or in that frame. That I am sure about