Held at a leading five-star hotel in Mumbai, the evening saw some of the biggest stars of Digital-content, Web-series and OTT walking away with the coveted Talentrack trophy. 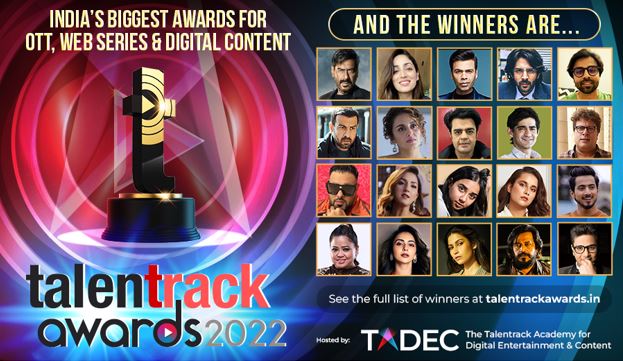 The Winners’ Night of the 6th annual Talentrack Awards was a sparkling, starry affair. Held at a leading five-star hotel in Mumbai, the evening saw some of the biggest stars of Digital-content, Web-series and OTT walking away with the coveted Talentrack trophy.

Established in 2017 as the pioneering awards for the digital-content ecosystem, Talentrack Awards recognise and felicitate companies and individuals who have delivered outstanding films, web-series, and performances through the year on various digital platforms and media.

The very versatile Karan Johar was felicitated with the Digital Sensation of the Year award for Big Boss OTT Season 1. The Best Director recognition was won by Tigmanshu Dhulia for The Great Indian Murder, while the casting director of the show, Mukesh Chhabra, won the Best Casting Director - Action/Thriller award. In the music category, the Best Singer awards were given to Badshah and Neeti Mohan. Prajakta Koli & Mr. Faisu received awards in the Best Influencer of the Year category. The vivacious Bharti Singh was honoured with the Viral Sensation of the Year trophy. The stunning duo, Jasmin Bhasin & Aly Goni, took home the Digital Jodi of the Year award.

Talking about the Awards, the Founder of Talentrack, Vineet Bajpai said, “As India’s leading talent-casting platform, it has been our continuous endeavour to empower the digital-content community. 2021 was an exciting year in terms of the quality of content produced in India, and it has been a privilege for us to be able to felicitate the finest of artists and organisations. My heartiest congratulations to all the winners, and we look forward to seeing you all again next year, for the 7th Annual Talentrack Awards.”

With over 5,00,000 performing Artists and 15,000+ industry Recruiters, Talentrack is India’s largest talent-casting platform for the media & entertainment sector.

Within two years since its inception, Talentrack was recognised as the ‘Best Talent Platform for Media & Entertainment' at the 8th Global Film Festival held at the Noida Film City and 'Best Mobile App for Education & Career' at Adgully's MOBEXX Awards 2017. Talentrack’s founder, Vineet Bajpai, has been awarded 'Entrepreneur of the Year 2016' by the Entrepreneur magazine.

Talentrack App provides powerful yet user-friendly tools to Artists of all kinds to create a digital portfolio and connect with Recruiters. Artists can build, manage & promote their portfolios on the platform, and use it as their single-window career manager. Thousands of industry recruiters are using Talentrack platform to post their casting requirements and hire the best from a large pool of creative resources.

Talentrack Awards 2022 is hosted by the Talentrack Academy for Digital Entertainment & Content – a pioneering initiative of Talentrack committed to catalysing and empowering the digital entertainment & content community. The Academy brings together an ecosystem of illustrious personalities and institutions from across the Indian entertainment sector. The Academy is devoted towards harnessing its collective intellect and influence to support artists, creators, filmmakers, entrepreneurs, and start-ups in the digital-content space. New initiatives around training and investment are being rolled-out, with a vision to build the Academy into the definitive hub for creative excellence in the digital-content universe.

Established in 2017, the Talentrack Awards recognise and felicitate companies and individuals who have delivered outstanding films, web-series, and performances in the digital-content ecosystem. Over the years, the prestigious Talentrack Awards have received nominations and participation from leading OTT platforms, top production houses, filmmakers, digital-content producers, advertising agencies, and some of the biggest stars of Bollywood. Some of the winners of the Talentrack Awards over the years are Manoj Bajpayee, Jackie Shroff, R Madhavan, Hansal Mehta, Kiara Advani, Anurag Basu, Pankaj Tripathi and Ekta Kapoor.

This article has been produced on behalf of Talentrack by ABP Digital Brand Studio.