‘Once you go down and see these animals, not just as a fin on the surface, but as a real full-bodied creature gliding through the water, your fear turns so quickly into wonder!’ 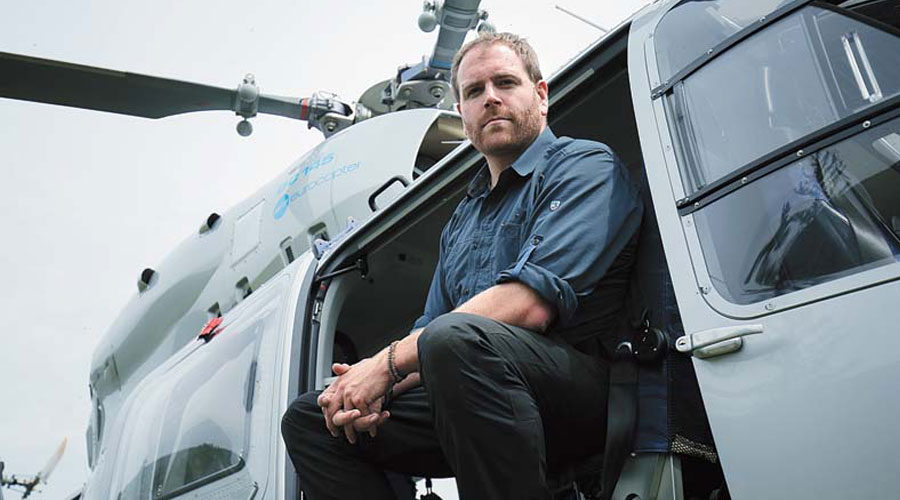 Josh Gates dives in shark-infested waters to understand the nature of fear surrounding the finned predators and comes back to defend the species facing mindless slaughter for their fins.

Swimming with the sharks, how does that feel?

Well, it’s scary before you do it. The idea of swimming with sharks is something I think that most people are afraid of. And when you’re there on the dive boat, you look down and you see all these fins in the water, everything in your body says, ‘Don’t jump in the water.’ But once you go down and see these animals, not just as a fin on the surface, but as a real full-bodied creature gliding through the water, your fear turns so quickly into wonder! You’re just so fascinated that a lot of that fear just slips away.

What kind of precautions do you take? Do you wear chainmail?

It depends on the type of sharks that you’re diving with. Shark Week has these long-standing relationships with the world’s best shark experts. So when you go into these environments, the biggest piece of protection that you have are the people that you’re with. For our particular show, William Shatner and I dove with different types of sharks. For Caribbean reef sharks, which, though they don’t have the reputation of Great Whites, actually can be aggressive, we wore chainmail. As we were trying to initially work with the sharks, we had a bait box, which is a container of food. You want to have some chainmail on because you are literally holding a food source, so the sharks definitely get interested in you. But for other dives, we didn’t wear any chainmail. We dove with tiger sharks, which are considered man-eaters, without cage or chainmail.

Did any encounter ever get too close for comfort?

Yes. When we were diving with the reef sharks, one of them got interested in me and tried to nip or headbutt my chest. That knocked me off my feet underwater because you don’t really realise how fast and powerful sharks are when they’re just swimming lazily in front of you, but they have a tremendous amount of acceleration and thrust from their tail. And this shark just knocks me off my feet. You get these little reminders that these animals are extremely capable predators when they want to be. but at other times you feel incredibly comfortable because you can see that they’re not just these unpredictable, mindless things.

How do the encounters take place? At what depth are you likely to find sharks?

We did a few different dives. I went to the Bahamas with William Shatner. We did a show that was all about him facing his fears. We dove at the Atlantis Resort in their massive lagoon tanks with hammerheads and sawfish. So that was kind of a first opportunity in a controlled environment to get up close to these large predatory animals. We’re not wearing armour, we’re just in full scuba gear and we’re probably only down about 20 feet or so. Then we moved on to some more challenging ocean dives.

In The Bahamas, the shark populations are everywhere. So you don’t necessarily have to be deep to encounter them. A lot of times they’re just cruising at the surface. The dive that we did with the reef sharks in the armour was probably at around 40 feet or so, but really we were just planted on the bottom. You’re weighted down by the armour. We were able to take our fins off and just stay on the bottom still wearing scuba gear, but just sort of in one place.

And then the last dive we did with the tiger sharks, same idea — traditional scuba diving, no cage, no armour and free diving in the water, but trying to stay close to the bottom and get in one position so you can observe the sharks safely.

Dolphins are our friendly neighbourhood sea creatures, but is a friendly shark the stuff of myth?

I’m not sure if they’re friendly. But the question is, are they dangerous? And I think that sharks are very misunderstood creatures. They obviously have had a PR campaign that has demonised them in movies like Jaws. They are seen as mindless killers. And they certainly are not that. Sharks are just like any other predatory animal. When they’re hungry, they hunt, they look for food. When they’re not, they don’t.

Most shark attacks on people happen because sharks think that a fin that’s in the water is a seal. They’re not serial killers on the hunt trying to find people. And my experience now having done Shark Week for two years is that they are so much more predictable than people give them credit for. If you get in the water with a shark, it’s not just like it’s going to come and attack you. They are curious animals. They are predators. We have to have a huge amount of respect for them. They can be dangerous. But they’re not unfriendly. They’re not out to get you.

How did you cope with the pandemic-induced lockdown, given that your profession requires you to travel to far corners?

It has been an incredibly challenging year for everybody. For me, as a professional traveller, it meant some big changes. I spent a year not flying. I’m usually at the airport every two or three days. So it was a huge change for me. I was very fortunate that I was able to spend that year in our expedition headquarters, hosting my talk show, Josh Gates Tonight. I got to talk to incredible celebrities around the world. So even though I wasn’t travelling, I was virtually meeting people. As we cautiously step back out into the world, it’s still a challenge. The Bahamas had a very strict protocol for Covid. We had to be tested repeatedly before and through the trip.

When did you shoot?

A month or so ago. The protocols differ from country to country. A lot of the restrictions have lifted or has been relaxed here in the (United) States. We were just in Columbia filming an episode of Expedition Unknown. They are really battling with Covid down there right now. That was a challenging place to shoot. I’m hopeful that things are getting better, but I think it’s going to be a bit of a bumpy road ahead.

If wishes were horses, where would you take the next episode of Expedition Unknown?

Oh, that’s an impossible question, because there’s so many places that I want to go to. When you first start travelling, you think, oh, I’m going to visit a country. And once I go there, I can check it off my list. And then when you start travelling, you realise how vast and dynamic every country is. Take India, for example. I remember the first time I went to India, I went to Delhi and a couple of different places, and I looked at a map and I thought, I haven’t seen India! Every country is like that for me. I’ve wanted to take the show to a lot of Pacific islands and Micronesia and places like that. I’d love to go to Sri Lanka, Maldives, Croatia, Serbia... I’ve been to over 100 countries, but there’s so many more places to visit and so many countries I want to visit again.

You took a Yeti footprint cast to Walt Disney World in Florida. Where had you collected that from?

That was from a trip we took to the Himalayas many years ago. We did a programme on the Yeti, the mythical creature of the Himalayas. And we found these remarkable footprints way up in the valleys leading up to the Everest base camp. And we made a footprint cast of it and brought that back to the States and showed specialists and scientists. Once we had done studies on it, we ended up donating it to Animal Kingdom in Orlando at Walt Disney World. The footprint is there in the Yeti museum, which is part of the queue for the Expedition Everest ride. As a kid who loves Disney, it is most gratifying to have a little piece of me inside of a Disney park!

If you walked into a restaurant today and found shark fin soup on the menu, what would you do?

Oh, I would walk out, for sure. Shark fin soup has to go away. I know that it is a cultural tradition in many places but like many traditions, it’s one that needs to be retired. And it is just so destructive and wasteful. We still lose something like 70-100 million sharks a year to finning. It’s killing a huge population of sharks and not really responsibly consuming them.