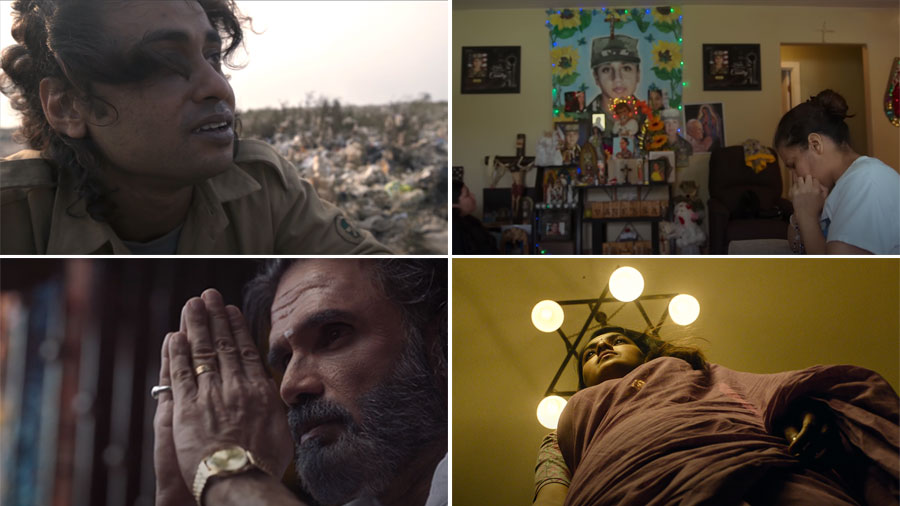 The trailer of Ishaan Ghose’s debut feature film Jhilli came out on Saturday. Written and directed by Ishaan Ghose and produced by Goutam Ghose, this movie is presented by SVF and stars Aranya Gupta, Bitan Biswas, Sombhunath De, Sayandeep Guha and Sourav Nayak.

The trailer follows Bokul (Aranya) eking out a living from whatever he can lay his hands on, including rubble and bones in the Dhapa dumping ground of eastern Kolkata. Two of his friends, Ganesh (Bitan) and Guddu (Sayandeep), sell second-hand goods on the streets. At the end of a long day, they take resort to narcotic substances to numb their nerves.

I Am Vanessa Guillen

Netflix has dropped the trailer of its upcoming American documentary I Am Vanessa Guillen. The feature documentary is directed by Christy Wegener, who previously helmed History Detectives. Two years after the death of Mexican-American soldier Vanessa Guillen, the documentary shows her family members and describes the events leading up to her disappearance and death at Fort Hood, Texas.

The synopsis reads, “When a young Mexican-American soldier vanishes from a U.S. Army base, her family leads an international movement to find her and expose ongoing corruption within the military ranks. Vanessa Guillen always dreamed of joining the US Army, but after reporting being sexually harassed at Fort Hood in Texas, she disappeared.”

I Am Vanessa Guillen will be streaming on Netflix from November 17.

MX player on Friday evening shared the official teaser of its upcoming crime thriller series Dharavi Bank. Directed by Samit Kakkad, who is known for films like Ascharyachakit! and Half Ticket, the series has been extensively shot in various locations across the Mumbai slum of Dharavi. It stars Suniel Shetty, Vivek Anand Oberoi, Sonali Kulkarni, Luke Kenny, Freddy Daruwala, Shanthi Priya, Santosh Juvekar and Nagesh Bhosle.

The teaser opens with shots of the underworld nexus in Mumbai's Dharavi and its undisputed kingpin Thalaivan (Suneil). His reign is contested by an honest cop, JCP Jayant Gavaskar (Vivek) as he vows to take down the criminal empire. The teaser is filled with gunfights, murders and other criminal activities.

Sony Music South on Saturday came up with the official trailer of its upcoming Malayalam-language romantic drama 4 Years. The film is headlined by Sarjano Khalid and Priya Prakash Warrier, while Prithviraj and Mammootty released the trailer of the film through their official social media accounts.

In the trailer, we see two engineering college students — Gayathri and Vishal — and their blossoming romance is going through a rough patch. The trailer shows glimpses of various moments in their relationship. The music for the film is composed by Sankar Sharma.

4 Years will hit the theatres on November 25.

The official trailer of upcoming Tamil-language thriller film Miral is now out. Written and directed by M Sakthivel, the film is produced by G Dilli Babu under the banner of Axess Film Factory. The film stars Bharath, Vani Bhojan, K.S.Ravikumar, Meerakrishnan, Rajkumar and Kaavya Arivumani.

We get to see a young couple along with their only son going for a drive at the beginning of the trailer. But after their car gets stuck on a lonely road, eerie events start to follow. music for the film is composed by Prasad S.N.

Miral will be released in theatres on November 11.