'The show marks my debut on one of the leading English entertainment channels, AXN' 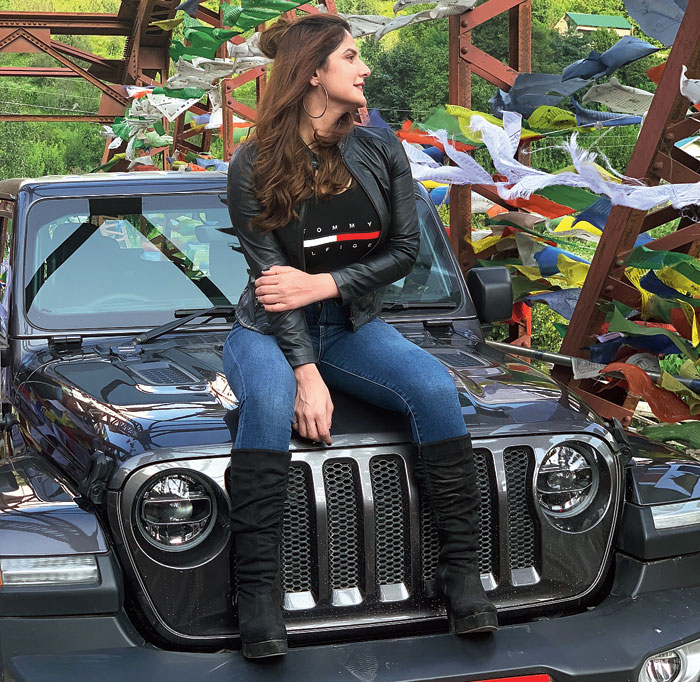 Zareen Khan is off revisiting famous filming locations around the country in a Jeep for AXN’s new show Jeep Bollywood Trails, her TV debut. She will go to Ladakh (3 Idiots), Manali (Jab We Met), Shimla (Bang Bang), Varanasi (Raanjhanaa) and Udaipur (Dhadak). Ahead of the first episode (on Saturdays 8pm) at the Druk School, Pangong Lake, The Telegraph caught up with Zareen:

How does it feel making your television debut?

Jeep Bollywood Trails marks my debut on one of the leading English entertainment channels, AXN. I don’t think if I could’ve asked for a better TV debut because it’s a travel show. For people who don’t know this about me, I’m a really passionate traveller. What’s best is I get to see the whole of India driving in a Jeep myself to different destinations. It’s been an amazing experience.

What’s going to be unique about this show?

This is not just a travel show but also a talk show. I’m going to different destinations, meeting local people, getting to know more about that place. It’s connected with Bollywood because we are going to be showing locations where some of the most iconic Bollywood films were shot. The directors also share their experiences… whether it’s eating the local food or their favourite restaurant or location there. The audience will get a lot of new information in a fun way. There’s films, there’s adventure... and who doesn’t love travelling?

How was it shooting in Ladakh at the 3 Idiots location?

Ladakh is my favourite place. I was trying to visit there since long… I think I was destined to go to Ladakh with Jeep Bollywood Trails so that they could show me Ladakh in such an amazing manner, It’s a beautiful place! We went to Pangong Lake where the climax of 3 Idiots was shot. You won’t be able to believe such a place exists on Earth. The water of the lake is so clear that it looks like the colour of the sky at whatever time of day it is, if the sky is blue at that time the whole lake would look blue. It was very beautiful.

Tell us some behind-the-scenes story from the shoot?

Since it’s a travel show something or the other keeps happening all the time since you’re always on the go. It’s not that we go to these destinations with a lot of crew, there are very few people. It’s so much fun shooting like that. When we were going to Pangong, it was a five-hour drive from the Ladakh city. We had started at 5am and had to cross one of the mountain passes. It had snowed the previous night and it was fresh snow. Driving in that terrain was very difficult and all the cars were slipping. It was a very risky ride… we were not even prepared and it was a surprise for us. But when we crossed all that and reached the lake, the whole struggle was worth it because it was so beautiful.

Did you rediscover our country in a new way while shooting for this show?

Yes and I have said that in so many episodes too. When you go to a place, you don’t really get to know enough about that place in detail. But in Jeep Bollywood Trails, they planned every trip in a way where we went to the core, the interior of every place. We met the locals and tasted local food.

I’m somebody who wants to go somewhere even if I have two days off. I love road trips. Travelling is the only experience that enriches your soul.

In India, I really want to visit the Northeast because that’s one side I’ve not seen yet. I love Manali and Goa... Manali is a beautiful place. And how can I forget Ladakh? Ladakh is heaven on Earth. Of what I have seen so far, I don’t think anything compares to Ladakh. it’s just so beautiful. Internationally, I love Los Angeles because it has a combination of mountains and beaches and it’s an amazing place to be and London because it has so much history.

What’s your most cherished travel memory?

I was in Paris with my sister and a lot of my friends who have been there before, warned us of being mugged there. One day, we left our hotel and saw two boys coming towards us - they were not Indians or Parisians, one was a Chinese guy and the other was an African-American. Since everybody had warned me so much about mugging, I tried to dodge them without letting my sister know about it. My sister is younger than me and I didn’t want her to get scared. We went to a coffee shop and I saw them waiting outside! When we came out, those two boys walked towards me and I was imagining the worst scenario. But they came up to me and said, ‘Zareen Khan?’ I was so shocked because I never thought that people of different races would actually know an actress called Zareen Khan exists (laughs)! But they were fans and they knew about all my films like Veer and Housefull 2. They even knew that I was shooting for my film 1921 in London. They took pictures with me and still the whole thing couldn’t sink in. My sister told me that I should have taken a picture with them as memory!

Which city is the most fashionable in the world according to you?

London and Dubai, because these are the only places I get my shoe size. I have really big feet…