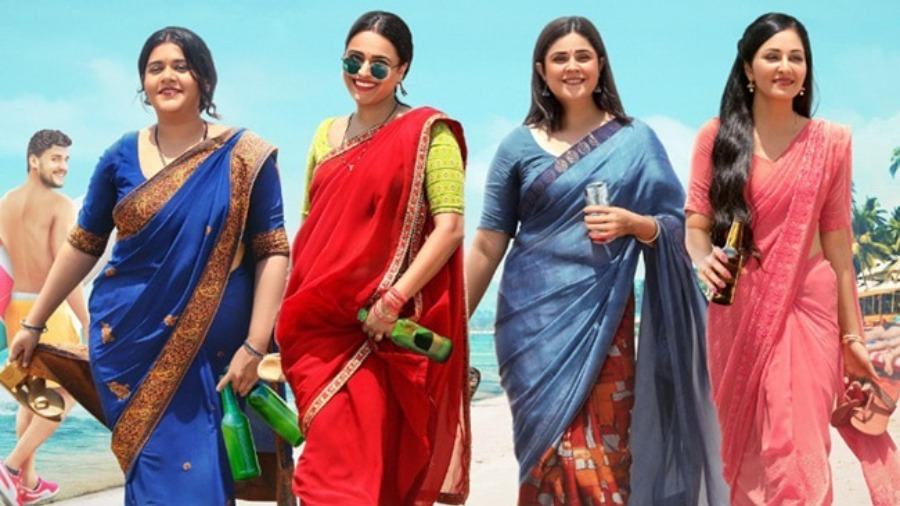 This February, a Bengali film titled Abar Bochhor Koori Pore had released at the theatres. It told us the story of four friends from school who were now estranged because of the pressures of life. After a drunken meet-up one evening, they decide to rediscover their old selves and go on a vacation to north Bengal.

The story of Shivangi (Swara Bhaskar), Neha (Shikha Talsania), Mansi (Meher Vij) and Sakina (Pooja Chopra) in Jahaan Chaar Yaar is somewhat similar. They are four friends who desperately need a break from their monotonous domestic life. The four  middle-class homemakers take a trip together to Goa for a much-needed change. But fate has other plans for them.

The premise of Jahaan Chaar Yaar is solid. There is a Dil Chahta Hai (2001) vibe to the idea. Despite a strong cast, the film fizzles out. Here’s why.

Jahaan Chaar Yaar has all the tropes of women-centric films. There’s the graduate Shivangi, who could have landed a corporate job but keeps herself busy in the kitchen. There’s Neha, whose husband is cheating on her. Sakina is threatened with triple talaq by her husband because she has failed to bear him a child. While we are kept in the dark about Mansi’s life for most part of the film, her story is the pivot for the climax.

What the film misses is a mature handling of the issues. Director Kamal Pandey walks on the treaded path, denying us a fresh perspective on problems we are all familiar with.

Unnecessary melodrama spoils the party. The characters are shrill, loud and over-the-top, always high on emotions. Why should men have all the fun is the thought director Kamal Pandey wants to leave the audience with. But in the process, he spins a web of stories that is too much to take. Often the characters break into preachy dialogues, which are not in consonance with the light, comedic tone of the movie.

Jahaan Chaar Yaar suffers from the curse of the second half. After grabbing attention by setting up an interesting murder mystery premise, the plot goes on a free fall after intermission. The murder investigation reveals several twists in the tale, followed by the oh-so-predictable climax that leaves one flummoxed.

The film celebrates womanhood. Unsurprisingly, the lead cast of four friends have a scintillating chemistry and the bonding on screen that reflects in their performance. However, the supporting actors, especially the husbands, are a complete let-down in most of the scenes. Even the main antagonists in the story are played by actors who ruin the climax with their plastic expressions and loud dialogue delivery.

The only reason that Jahaan Chaar Yaar is watchable is because of the four leading ladies. But the talent of Swara Bhasker, Meher Vij, Shikha Talsania and Pooja Chopra remains largely untapped because of the poor writing and sloppy direction. The only saving grace is the song Aisi ki Taisi, where the ladies have fun exploring Goa.