Advertisement
Home / Entertainment / It's a Wrap! The best and worst movies of 2018

'Tis the season to know your lists 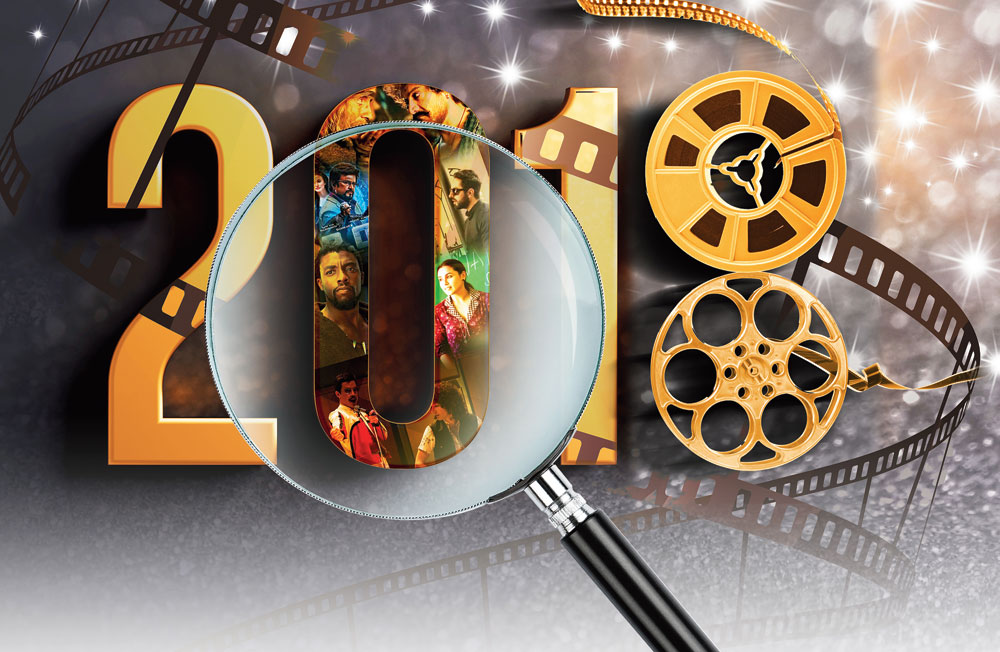 The success of Sriram Raghavan’s quirky thriller is that those who saw it are still discussing and dissecting it. The audience, after enduring the myriad hairpin plot bends and twists, leaves the theatres blind-folded, not knowing where exactly they are headed to. Some believe that Akash (played by the worth-every-penny Ayushmann Khurrana), a pianist whose faking of a disability sets off a chain of events, was indeed blinded by Simi (Tabu); others think that he could see with one eye. Did Akash make up the entire climax? What did the rabbit signify? Raghavan delivered a story that lingers and cleverly left it for interpretation. The film nails it with Daniel B. George’s music that remained on top of the charts for a good two months. Not for once did Andhadhun deviate from the central storyline, making it a just-what-the-doctor-ordered dose of content film watching.

It may not be the best superhero film or even the best Marvel film, but Black Panther pioneered an African American and black cast in a mainstream Hollywood film. Second, it does not pander to the usual stereotypes with the African characters being shown as technologically advanced. They live in an developed society often associated with the first world and possibly for the first time, mineral rich Africans are in charge of their own mineral resources and aren’t being exploited for it. In fact, Ulysses Klaw (Andy Serkis) is a representation of imperialism trying to steal their mineral — vibranium — but for once, the Africans aren’t having any of it. Having said that, the movie does an amazing job of portraying African culture as it exists, mingling myth and lore and the tribal way of living with the technologically advanced world of Wakanda. The story is strong and the quips and sibling rivalry between T’Challa (Chadwick Boseman) and Shuri (Letitia Wright), relatable.

The biopic has its share of historical inaccuracies — from the band’s name to the Live Aid “reunion” concert — but fans held the casting was superb. Queen guitarist Brian May said how they escaped a disaster in casting with original choice for Freddie Mercury, Sacha Baron Cohen. Not only did Rami Malek look the part, including the prosthetic teeth, he was brilliant as the legendary Queen frontman. Finally, the music meshed well with the narrative, making the film the all-time highest grossing musical biopic.

Actress Rani Mukerji is quite like the Santa Claus who comes once a year and has loads of goodies to offer. Through Hichki, Rani, an aspiring teacher who suffers from Tourette Syndrome, tries to give the underdogs a chance to fight back and make a place of their own in society. Widely accepted for its crisp and smart message, Hichki in a true sense was the underdog of the year as there were no big names, no male lead and above all had a female lead who doesn’t belong to the “conventional heroine format”. Hichki doesn’t stray from its topic for even a frame and through Rani’s syndrome the film drives home the point that no matter what the hiccup is, victory is assured if you stay true to your passion and performance.

Oh Stree, kal aana. In this ridiculously “true” urban legend (Nale ba) lies a film that truly deserves an ovation. Stree is for multiple watches and, like Andhadhun, stays true to its subject. With a shoe-string budget of Rs 30 crore, director Amar Kaushik not only delivered a social message but also juxtaposed horror and comedy minus spoof to give birth to a new genre — horemedy. Stree is a ghost of the past but this “horrific” stree is still relevant in terms of treatment meted out to women. Stree, as a story, is so strong that it would have been a hit even without a Rajkummar Rao or a Shraddha Kapoor. It is perhaps one of those horror films India can take pride in and, yes, you can’t lay this ghost to rest as a sequel is in the offing. Shhh… Oh Stree, agle saal aana.

A desi pirate feature? A film on thugs? A coming together of two of the country’s biggest stars? The movie made on an estimated budget of Rs 335 crore killed all — and some more — hopes. While the Vijay Krishna Acharya (of Tashan and Dhoom 3 fame) film promised a visual extravaganza, the story or the lack of it left audiences nursing a headache. Over two-and-a-half excruciating hours, it went from a tale of fight against the British, to that of a conman to thugees to (yes, it’s not yet done) pirates to back to a fight against the oppressive Brits. It had a bit of Manoj Kumar’s Kranti (1981) with a lot of Pirates of Caribbean thrown in. But unfortunately, neither Big B nor Aamir Khan were as jazzy as Captain Jack Sparrow nor were Katrina Kaif and Fatima Sana Shaikh as charming as Keira Knightley. True to Firangi’s nature, the film went from one con job to another before the audience realised they were the ones at the receiving end. How else do you explain sea peeking from behind what is clearly a Rajasthani-esque castle or going from the Thai islands to the vast Mediterranean sea at Malta in a matter of seconds, all while trying to make you believe they're fighting for India’s freedom?

Made on a budget of Rs 543 crore, this sci-fi extravaganza “with a message” is more of a computer game than a motion picture. Sense this: You are talking to your ailing mother over the phone and suddenly the phone rockets away. You would first tell yourself that doomsday is near or you would file a police complaint. When you reach the police station you find lakhs queuing up with a similar complaint. Now you believe doomsday is here. Spoiler alert: So why are the phones vanishing? Because here’s Akshay Kumar, the birdman, who is in love with birds and is out to avenge the death of his pets against telecom tycoons and politicians. We feel the monotony of the surplus visual effects and the baggage of two superstars — Akki and Rajinikanth.

Scary creatures and a post-apocalyptic tale seem to be a few of Hollywood’s favourite things, but this year’s “silent” horror was genuinely bone-chilling. The Abbott family — Lee and Evelyn, played by real-life couple John Krasinski and Emily Blunt — live in a world populated by deadly creatures that hunt by sound, forcing them to communicate in sign language. The child actors are brilliant, and you feel the heavily-pregnant Evelyn’s terror and pain as she tries to get through her contractions as silently as possible. Krasinski — of comedy show The Office fame — drawn to the story for its parent-child equation, and Emily Blunt, a.k.a. the new Mary Poppins, feel like absolutely different people considering the terrifying world they take us to.

An adorable, unaffected-by-the-world-outside teenage Indian girl marries a Pakistani officer to gather a valuable piece of information for her country as a spy because “Watan ke aage kuch nahi”. Though named Sehmat Khan, her sehmat wasn’t sought when her father married her off to the officer from the “neighbourhood”. What follows is a tale of love, despair and betrayal. Why Raazi features in the top five films of 2018 is because of its honesty in keeping up with the true events that followed in the 1971 India-Pakistan war. Alia Bhatt as Sehmat was the roll-over prize and Vicky Kaushal nailed it as the Pakistani officer who too stays true to his watan. Director Meghna Gulzar, after Talvar, delivered yet another pragmatic story of how relationships collapse when they go through hard situations.

This all-woman friendship drama on the lines of Zindagi Na Milegi Dobara and Dil Chahta Hai, had all the glam needed to make a film a triumph. It managed to rake in the bucks but failed miserably to show women can be great friends. It became fodder for the memes industry and within a week, sank into oblivion. In spite of stars like Kareena Kapoor Khan and Sonam Kapoor, the film failed to deliver a story that could have a lasting impact.

Not all love stories are Sairat. Dhadak tried to emulate the Marathi blockbuster in all possible ways, including its songs, choreography and dialogues, but failed to realise Sairat can’t be copied. With Sairat, director Nagraj Manjule illustrated the underlying caste divide in society whereas Dhadak brought in glamour and a pinch of Karan Johar. With these intruders, Dhadak lost focus. With newbies Ishaan Khatter and Janhvi Kapoor, Dhadak had managed to generate curiosity following the trailer but fizzled out soon after its release as audiences saw the difference between class filmmaking and filmmaking for a class.

Another film on a real-life icon, this time Neil Armstrong. Everyone knows how Armstrong was the first man to walk on the Moon, but this personal story brings a lot of people up close with the man’s life — away from being an astronaut. The loss of his child, his grief, the man distancing from his family. Most critics called Ryan Gosling (Armstrong) and Claire Foy (playing the astronaut’s first wife Janet) understated in their performance.

“Yeh bhi koi mummy papa ke karne ki cheez hai?” Nakul (played by Ayushmann Khurrana) asks his girlfriend Renee (Sanya Malhotra) in the middle of a make-out session. Yes, Badhaai Ho teaches you to embrace shame and find happiness among your own. Badhaai Ho not only broke stereotype but also came across as a brave project which required guts to take to the middle class. We mean, who gets pregnant in her late-50s? This is what we Indians are forced to believe and that parents can have a private life is beyond the mind’s eye because we look at them with “respect”. Badhaai Ho is a great leveller.

If Black Panther did it for the black characters, Crazy Rich Asians did it for Asian characters — usually always relegated to secondary and subservient roles in Hollywood films. As the title of this over-the-top film suggests, it’s about an Asian family with a gigantic fortune. There’s a crazily scary mother (former Bond girl Michelle Yeoh), a self-effacing zillionaire son (Henry Golding) and his Chinese-American economics professor (breakout star Constance Wu) besides an ensemble cast that delivers several fun moments. The film turns the Asian cliché on its head — Asian characters need not be in the background always, they can be rich, crazy rich enough to buy a hotel on being denied reservation in London. The chemistry between Constance and Michelle is perfectly played off each other, with the relationship well paced out — from immense displeasure to the sign of approval.

As 2018 comes to a close, we take a look at the year gone by. If there were a few memorable movies and some pretty mediocre ones, there were also those that made you cringe.

The films we loved...

The films that drew yawns...

Finally, our picks from Hollywood