Netflix’s first Belgian Original ends on a cliffhanger — will they? Won’t they? 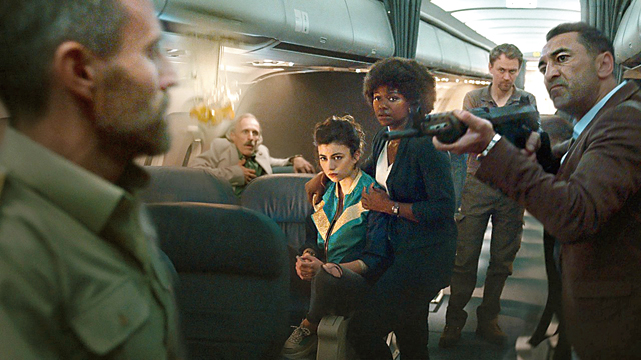 This is probably the best time — and in some ways, the worst — to drop a show like Into The Night. This post-apocalyptic series feeds on our current fear of the unknown even as it allows us to live vicariously through the scene and setting where its predominant action takes place — on board an aircraft (remember those shiny objects in the sky that would once fly us from one place to another? That.)

Though its theme may mirror that of a typical end-of-the-world drama — a handful of passengers on a plane striving to outrun, or rather out-fly, the rays of the sun which has inexplicably made people all over the world drop dead on their feet — Into The Night is not your average derivative thriller. Netflix’s first Belgian Original is an edge-of-the-seat watch that smartly and skilfully uses the standard tropes — race against time to an impending feeling of doom — to craft what is essentially a story of survival against all odds, even as it individually and collectively examines changing attitudes and affiliations brought on by the human need to stay alive.

Over six taut episodes that scarcely give the viewer much time to breathe, Into The Night plays out in French with its ragtag team of strangers forced to band together under extreme circumstances. They are drawn from different nationalities — French, Belgian, Russian, Turkish, Dutch, Italian — and it’s their individual quirks and backstories as well as their racially coloured mistrust of each other (at one point, someone laments: “Just a bunch of white men whining that they can’t control things for once”. Then, a passenger chooses to introduce himself to another with: “It’s nice to know we have a good Muslim on board”) that lends the drama much of its interest and intrigue.

Into The Night kicks off by focusing on Sylvie (Pauline Etienne), a depressed Belgian woman who is all set to fly to Moscow with her recently deceased boyfriend’s ashes and then kill herself. As she walks into the aircraft that’s still boarding — there are a few passengers in business class, besides the

co-pilot, stewardess and an aircraft engineer on board — a man brandishing a gun barges into the plane and forces it to take off. What seems like a classic case of a hijack at first, however, turns out to be something else. The man called Terenzio (Stefano Cassetti) reveals himself to be a NATO officer, warning the group that they need to fly out west to stay under the cover of darkness and avoid the sun. Though sceptical at first, the passengers quickly realise that they are perhaps only a handful of people still left alive and thereon, Into The Night becomes a breathless, rollercoaster ride where loyalties are tested and prejudices threaten to derail the group’s need to stay united if they want to stay alive.

What works for Into The Night — based on the Polish novel The Old Axolotl — is that it is a rare science-fiction drama that doesn’t alienate the viewer. Scientific terms are thrown around all right — we are told that an increase in its ionising radiation is causing the sun to kill people by modifying their atomic structure and causing a breakdown of their molecules — but there’s nothing that’s too difficult to grasp.

More Speed than Lost, the thrills in Into The Night are derived from its premise, but what sustains it is the human drama at its core. Each episode kicks off with a backstory of one of the people on board, with a lot of the focus resting on the pilot Mathieu (Laurent Capelluto) who is forced into a position of leadership to deal with the crisis. What also keeps the momentum going is that not all the action takes place on board — the aircraft makes halts in various cities and continents, under the cover of darkness to refuel and to load up on supplies, with the group not only racing against time before the first rays of the sun arrive, but also having to contend with stowaways with murder on their mind and even those within their immediate group with dubious intentions. Tempers fly, nerves are on edge and the drama, sometimes repetitive but mostly compelling, is at its peak.

Into The Night ends on a cliffhanger — will they? Won’t they? — with the scene well and truly set for Season 2. We urge you to keep a date with it, not only for its twisty and timely theme, but also because, in the end, it’s a series that holds out a lot of hope. Something that we really need in the times we are living in.