Amazon Prime's Four More Shots Please! focuses on the crests and troughs in the lives of four friends in Mumbai 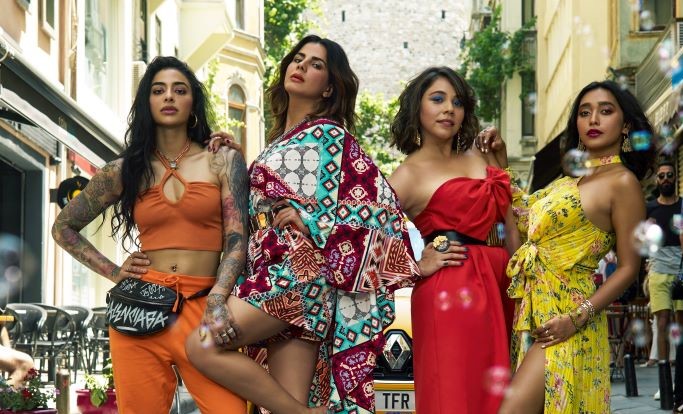 Amazon Prime's Four More Shots Please!, starring Kirti Kulhari, Sayani Gupta, Maanvi Gagroo and Bani J as four best friends, recently returned with its second season on April 17. Reminiscent of the American series Sex and the City, the show focuses on the crests and troughs in the lives of four friends in Mumbai. The Telegraph caught up for a chat with Maanvi for an exclusive chat. Excerpts...

What was the best part about season 2?

The one thing that the writers have tried to do is go deeper within the four people. We know that even in a group of four or five friends, you always have two friends who are closer or three friends who are closer. And it's not just about being close, you always have a different equation with each one of them. That's the thing they have gone deeper into, the intra-group dynamic. Otherwise, in every other aspect too they have just scaled it up. The drama has scaled up, the comedy has scaled up, the passion has scaled up... they have tried to go a notch higher.

And how do you think your character Siddhi Patel's arc evolved?

In season 1, we saw that Siddhi realises she has not been leading her life fully. Suddenly, towards the second half of the season, she explores herself and her life. In season 2, we see her exploring everything, trying out things. She's trying to find herself a job and personally, trying to find love. I think she is a lot freer in season 2, a lot more herself and coming into her own.

In real life, what kind of an equation do the four girls share?

This is very interesting because I was telling the girls recently that I have a very similar relationship with all of them similar to the one that I have on the show. I feel very close to Bani, just like Siddhi does towards Umang. I feel like Bani is my go-to girl. Kirti is someone I go to for advice, like a slightly more mature perspective. I keep teasing her that she reminds me of my actual sister, she's very similar to her. That's the relationship I share with her, like if I f**k something up, I call Kirti and tell her (laughs). And with Sayani, it's a lot of fun and we hang out a lot together. We have a lot of common friends and I've known her since before the show. I got to know Kirti and Bani through the show but Sayani and I have known each other for a long time. We stay close by and we end up spending a lot of time together.

Have you ever tried to bring in experiences from your own life while portraying Siddhi?

No, actually you know that was my biggest worry in season 1. I kept telling our director Anu (Menon) that I understand Siddhi on paper but I don't know how to channel her because I've never felt these things, I've never felt under confident because of my body. I've felt under confident because of other reasons but never for my body and I definitely wasn't a virgin when I shot that (laughs). Being unsure of things, not being able to stand up for yourself in front of your family... these are things I could never relate to. So to bring out experiences from my own life was very hard because it had no resonance with my personal life. I kind of had to wing it. Whatever I'm shooting, I end up forming relations similar to that on the show. So when I'm shooting with Simone (Singh), it's actually like a very mother-daughter sort of a relationship off set as well. Of course it's more chill and I can discuss a lot more things with her than I can discuss with my own mom ever. But the essential dynamic is the same. So when the four of us are doing scenes together, they've only gotten better because we have become better friends. When we started the show, we didn't know each other and it has only gotten better and we see that. Even the workshops we had for season 3, those workshops were a lot more fun than the ones we did for season 2. Inherently, I think a comfort level comes in automatically when we bring in certain things from our own lives, like a certain joke or mannerism or look.

So, the shoot was a lot of fun now that you guys are better friends off-set too?

We had a great time this season, yaar! I remember we had to do a photoshoot and we were doing it in different locations and there were no vanities. We were given cars and we were changing in those cars, we were going to restaurants and cafés and getting our hair and make-up done. Although it was very hectic and painful, there was also something really fun about it because we were helping each other with lipsticks and all! Usually we get ready in our own vanities but that day we were all over the place and it was great fun helping each other out. That was a really fun moment for me.

You've been a part of successful web shows like TVF's Pitchers, Permanent Roommates and Tripling much before the digital space exploded with content. How do you think this space has evolved since then?

I'm enjoying it in the sense that I love it when people say that we are the path makers and trendsetters. TVF (The Viral Fever) was for sure! A lot of times a new batch of actors come up and say that they learnt it from us, it's like a senior-junior equation which is cute. But my worry is, the same thing happening with it that happened with satellite TV. Initially, when it came, there were a lot of good shows and then everyone jumped on to it. A lot of channels shut down and there were only a few like Star Plus, Zee TV or Sony left. The content kept going downhill and it kept getting more average. Even when someone tried to do something new on television, there was no audience for it until digital came about. So my worry is that this is the same trajectory this is also going to take. I see it happening now, I see a lot of content being made just for the heck of it. Like, 'haan web pe sex, drugs, gaali allowed hai toh daalo'. When maybe the first web show with a gaali came, it wasn't because the makers thought let's make a show with gaalis. They must have thought, 'Let's make a show about us and how we talk'. But I see a lot of makers doing that now, putting violence, sex, gaalis for the heck of it. I wish there was a way of stopping it.