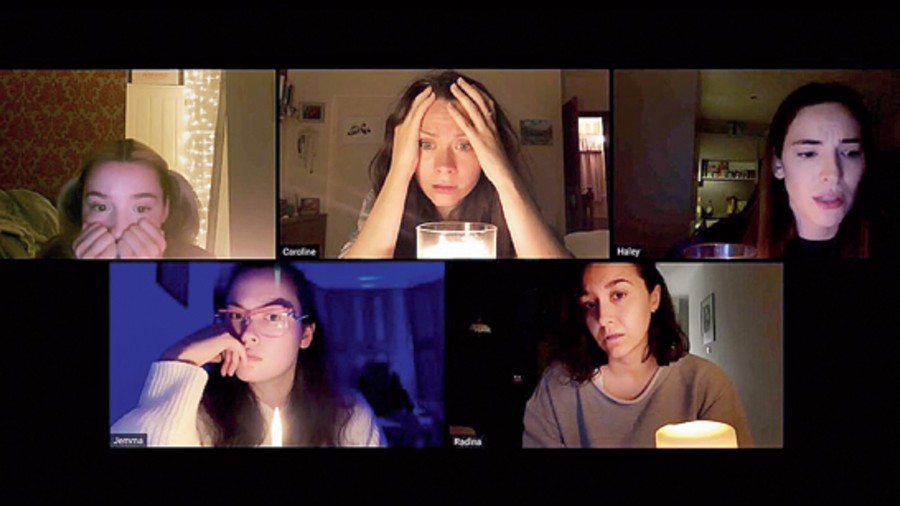 Host is a lean and mean horror film. But the scariest thing about it is how it effectively captures, and also speaks to, the horrific times that we are living in. Relevant and timely (in a good or bad way is for you to decide, depending on which side of the horror buff/ Covid anxiety scale you are at), this British indie film, just about 56 minutes long, was filmed during the global lockdown last year, and made its way to Amazon Prime Video last week.

Host uses the very crutch — technology and social media — that has kept us going during these turbulent times to whip up a scare fest that is innovative, wildly original and yes, pretty damn freaky.

Doffing its hat to the genre of found-footage horror — especially The Blair Witch Project and Paranormal Activity — Host hits the ground running. Let’s admit it, Zoom calls, as most of us have discovered over the last year or so, can be pretty hellish. Take it from someone who does at least upwards of four on any given day. Now take a Zoom call between six university friends, possibly bored of baking banana bread and doing black-and-white photo challenges, and deciding to do a ‘technological version’ of something that most of us have attempted at least once in our lives — summoning spirits. But with a difference — this one is over a Zoom call.

Director Rob Savage smartly cobbles together his scant resources to make Host a zeitgeist of the times we are living in. The film — pretty much like the 2018 winner Searching — plays out wholly through the computer screen. As the friends — five women and one man, who quickly abandons them (as men most often are wont to do) — wait for their star attraction, an Irish medium, to pop up on screen to guide them through the seance, Host adopts the effective route of showing them all initially making light of the situation they are in, with plenty of pandemic-based jokes thrown in, most of them cracked to mask Covid anxiety (I loved the one in which one of them says that one now has to fart to cover the sound of a cough, and not the other way round). There’s even a drinking game, with the buddies deciding to take a shot every time the medium utters the phrase “astral plane”.

But the fun and games quickly grind to a halt. A bad WiFi connection (now that’s a horror in itself in these WFH times) blanks out the medium’s screen and then it’s up to the five gal pals to navigate their way through an unwanted entity that they have unwittingly ushered in. They watch what quickly transcends into the grotesque and gory unfold on their computer screens, and so do you. At the end of it, you are scared shitless (pardon my French, but there is no other way to put it).

I am someone who gets a kick out of watching horror alone, mostly at night, the lights turned off. Very few, with some classic exceptions, have made me sit up and look around nervously. Host, even though it takes no giant strides in the genre, effectively does that. Jump scares abound, made far more potent by the fact that the horror, playing out on laptop screens, is quite literally in your face. There are some genre cliches for sure, but every time you feel that you are watching a pandemic-tinged Poltergeist playing out, Savage throws a curveball by peppering the narrative with something new. Most often, it goes straight for the jugular, whether it’s watching (spoilers ahead) a ‘tech version’ of Caroline walking around long after she’s dead or Teddy’s face being burnt alive in front of your eyes.

What primarily works for Host is that instead of making the virus the monster (which it truly is), it feeds on our anxieties that these unprecedented times of uncertainty, fear and grief have brought on, and serves up a relevant, and deeply engaging, shocker. It’s a great example of how one big idea, propped up by a modest budget and meagre resources, can be made into an authentic and inventive thriller, turning our new normal into something that’s both topical and terrifying.

The scares — Haley being pulled out of the room by an invisible entity (a classic Paranormal Activity trope) or Emma peppering the floor with flour to pick out ‘footsteps’ — may not be particularly original, but what makes Host highly compelling is that, unlike a traditional seance where the participants can face the horror collectively, here they are separated by miles, helplessly watching their friends being slaughtered, and just waiting for their turn. Until the screen goes blank after 40 minutes. Well, they hadn’t invested in a paid package.