Glimpses from the poster launch of the December film 'Projapati'

We got to know about many wonderful anecdotes from the shoot of Mrigaya, says Dev 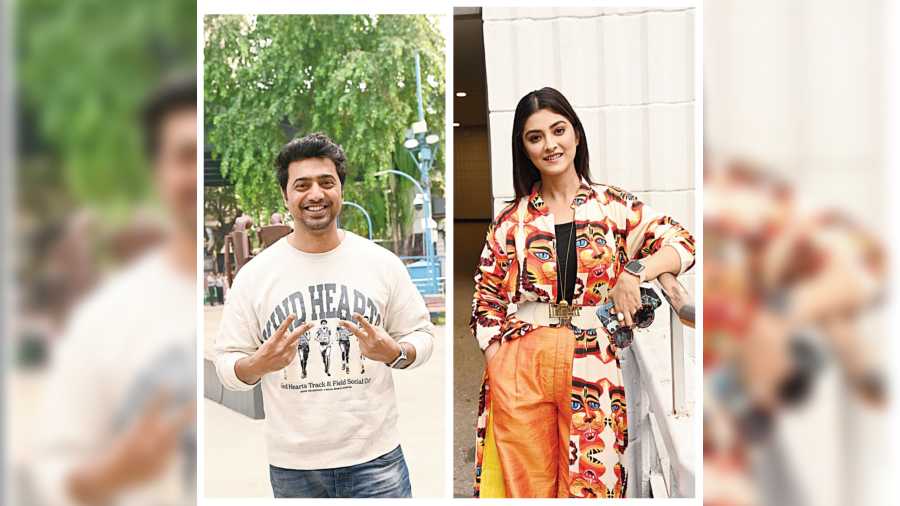 The first poster of the December 23 film Projapati was unveiled at Nandan in the presence of the cast members including Dev, Mamata Shankar, Shweta Bhattacharya, Koneenica Banerjee and Biswanath Basu along with Atanu Raychaudhuri and Pranab Guha of Bengal Talkies and Avijit Sen, the director of Projapati.

“The audience had showered us with a whole lot of love for Tonic. In Projapati, Mithunda (Chakraborty) and I share an easy camaraderie in the film, and we have a great rapport off screen as well. It’ll get reflected in the film. We got to know about many wonderful anecdotes from the shoot of Mrigaya,” says Dev.

“Projapati traces the finer nuances of the bond between a father and his son. While the son works independently, the father’s quest of finding a match for his son leads to interesting incidents that take forward the story. After the grand success of Tonic, which has been selected for Indian Panorama at 53rd  IFFI 2022 in the Mainstream Cinema category, we are delighted to have Mithun Chakraborty and Mamata Shankar again for Projapati, after Mrigaya which was released 46 years ago. We are also glad to have Dev along with Shweta on the big screen,” say Atanu Raychaudhuri and Pranab Kumar Guha on behalf of Bengal Talkies.

“Projapati is a dream project for me as I got to direct the stalwarts of Indian cinema, Mithun Chakraborty and Mamata Shankar. Their chemistry is still electrifying. This is my second movie with Dev and he keeps on surprising me with his performance every time. The entire star cast has given powerful yet endearing performances in this family drama, which should be liked by our audience,” says Avijit Sen. The film is produced by Bengal Talkies and Dev Entertainment Ventures.