Advertisement
Home / Entertainment / Getting together to grill Dhritiman Chaterji

Getting together to grill Dhritiman Chaterji

The actor fields questions on Shanku, Satyajit Ray films and his acting process 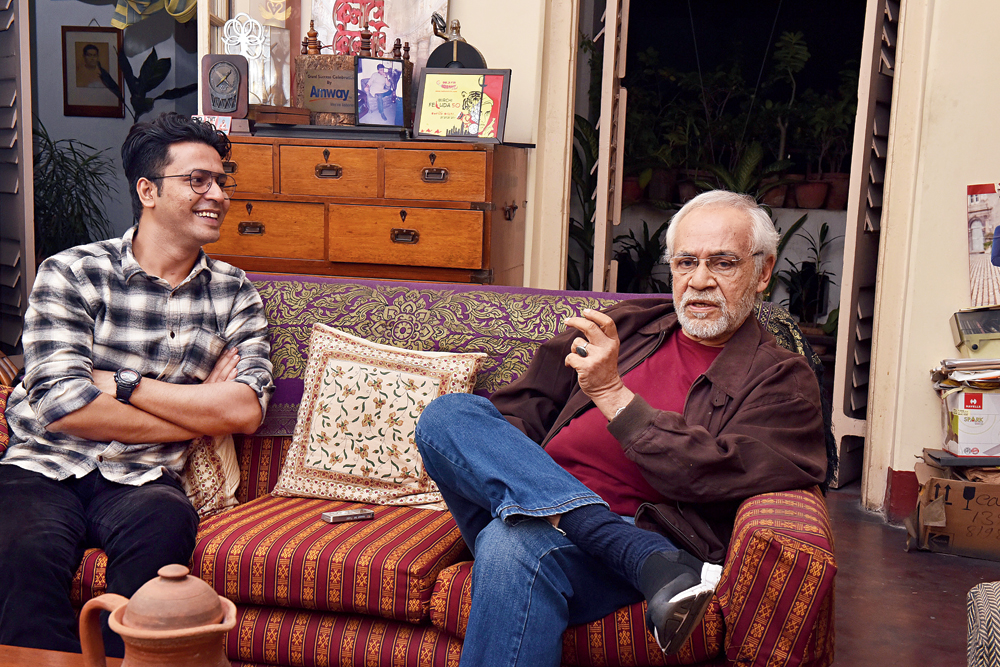 On December 5, Anirban Bhattacharya walked into the famous Bishop Lefroy Road address for the first time. The occasion was a chat with actor Dhritiman Chaterji, who plays Professor Shanku in the December 20 film Professor Shanku O El Dorado. “I don’t know how to put this feeling of romancha into words… I’m also sitting with Dhritiman Chaterji on a sofa for a chat for the first time. I had a matinee show of a play called Titumir and I was a bit tired. But after sitting here for five minutes, my body temperature started changing. I can feel the energy coursing through my body. It is an indescribable feeling,” smiled Anirban.

The Telegraph: What are your earliest memories of reading Professor Shanku? What kind of an impression did he have on you?

Dhritiman Chaterji: The first Shanku story appeared in 1961. As it happens, that was the year I finished school. The impression was primarily created by the physical characteristics that Satyajit Ray had given Shanku. As the character went along, the impression of the so-called ‘mad scientist’ actually grew dimmer and dimmer. Those are the earliest memories. In school we had grown up reading lots of things… we were reading Jules Verne, Arthur Conan Doyle, we were used to reading fantasy stories… something out of realistic narrative storytelling. When I read Shanku, I hadn’t yet read Professor Challenger, so there was no point of reference. One would get books in the annual prize distribution in our school… actually we had sort of a say in what sort of books we would get as a prize! I would ask for and get science fiction anthologies. I was very interested in science fiction.

The Telegraph: What set Shanku apart from the rest?

Dhritiman: The fact that it was happening in Bangla. And here was a scientist who was very accomplished. The path was open to him to take up a position in well-known institutions, but he chose to go back to his town and build his own lab and do all these fabulous inventions.

The Telegraph: Did you have any conversation with Satyajit Ray about Shanku?

Dhritiman: In a very general kind of way.

Anirban: How does one preserve the actor’s self?

Dhritiman: I have been fortunate enough to observe a lot of trends over the years. Shanku is releasing and Pratidwandi (Dhritiman’s first film) completes 50 years in 2020. Preserving it (the actor’s self) depends on the individual. Different individuals have different ways to handle it… they have different ways to prepare for a role… how serious they get in engaging with a role. It is an individual characteristic.

Anirban: Pratidwandi is one of my favourite films. For that interview scene, was there a rehearsal?

Dhritiman: Rehearsals hoto na. Manikda (Satyajit Ray) would get the cast and crew together, they would all sit down and he’d read out the script to them. He knew exactly what he wanted and how to go about it. Every shot was planned. He would give a whole lot of leeway to actors he had great confidence in. Jar obhinoy khomota niye kichhuta shongshoy chhilo, he would give specific set of instructions.

Anirban: Was there a brief from him for the interview scene?

Dhritiman: The lines were there, and the lines informed me on how to play the scene. You know he was famous for casting new actors in specific roles. Through my experience I came up with the theory on how he did it — if he called someone (who was a new face) to his place, he would talk to that person at length. He would talk about various things… maybe not even about cinema. He would observe everything… the body language, the way someone speaks… and once that new person was cast, he would then write out the dialogues for that part, so it felt like the perfect fit in the film. It was all about casting someone who was perfect for a particular character.

Anirban: Are you aware that many people call you an actor who was ahead of his time? I remember listening to my father and my uncle discussing your acting skills.

Dhritiman: I have heard a lot of things but I haven’t heard this.

Anirban: You gave something quite new in terms of pattern in your first film.

Dhritiman: That kind of acting just came out spontaneously, I did not analyse it then; I did not want to be different for the sake of it.

Anirban: But imagine, when I was studying acting in college, we were told to watch you to learn ‘introvert acting’.

Dhritiman: The reason for that was Satyajit Ray’s screenplay and dialogues. I did not consciously do this ‘introvert kind of acting’. My character was quite extroverted in 36 Chowringhee Lane. It felt organic then. That is how it should be.

The Telegraph: How has the working environment on the sets changed over the years?

Anirban: The shift happened just before I entered films… a shomoshya regarding internal discipline when the transformation happened from celluloid to digital. Silence was necessary when shooting with film camera. A reel would be ruined if silence was not maintained on the sets. Now that you can take thousands of shots, there is a shomoshya with the discipline...

Dhritiman: With instant playback now, everyone has an opinion… and often I find everyone watching the playback. Even visitors to a set have opinions. Also, sync-sound shooting has returned but not in Calcutta. People are doing sync-sound shooting in Hollywood films and in Bombay… thousands of people are there on the sets. But they maintain silence. That discipline is there. But here it is different.

The Telegraph: How was the mood on a Ray film set?

Dhritiman: A lot depends on physical conditions. I remember the shoot of Ganashatru… we (the actors) would give adda once the shoot got over in one large make-up room. Now, everyone goes away to their respective vans. That option to discuss has gone down.

Anirban: The word that assistant directors say repeatedly on the sets is ‘silence’.

Dhritiman: This ‘silence’ is taken for granted in Hollywood or for the films in Bombay.

Anirban: A certain chaos regarding the shifting of equipment happens on the sets because of time constraints. And you cannot avoid that…

Dhritiman: The time constraint was also there in the 1970s. On a lighter note, Satyajit Ray and Mrinal Sen would be present beside the camera… now, on occasions on Bombay film sets, I cannot figure out where the director is when I walk on to the sets. Maybe he is sitting far away, and his assistant comes up to me to talk about the scene.

The Telegraph: How did you prepare to play Shanku?

Dhritiman: My main commitment is towards the director’s vision of what I understood of it and the screenplay. Once we discuss everything, the screenplay becomes my bible. And if a screenplay is based on a novel and I haven’t read the story, then I don’t read the novel deliberately. Otherwise there will be confusion. But Shanku is different… one, because it was written in the diary format… and after reading the stories thoroughly I got to know a lot of things, events… but not a whole lot about Shanku the person. I got a few clues about the person. In the last story, we get to know a lot more about the person, his values. I read the stories to find out the clues about Shanku the person. Also, Babu’s (Sandip Ray) way of working is like his father; he does not believe in directing his actors too much. He lets the actors be, after the discussions are over.

The Telegraph: How was the argument scene in Agantuk set up?

Dhritiman: During those days we would always be there on the sets or around even if we did not have a shot. We would observe. There was always this connect with what was happening on the sets. I prepared it in my own way. There was no rehearsal.

Of course, those of us who have studied cinema and theatre have a theoretical background. Ultimately, the acting part is really practical.

The Telegraph: Do you ever get weighed down by the expectations when you play a popular character like Shanku?

Dhritiman: If you get too conscious of what the viewer is going to say, then you get paralysed. Finally, you have to be honest to yourself and to the director. Do it the way you feel it should be done and hope for the best.