Advertisement
Home / Entertainment / From Boston to Nashville via City of Joy, Zachary Ray is working towards his debut album

From Boston to Nashville via City of Joy, Zachary Ray is working towards his debut album 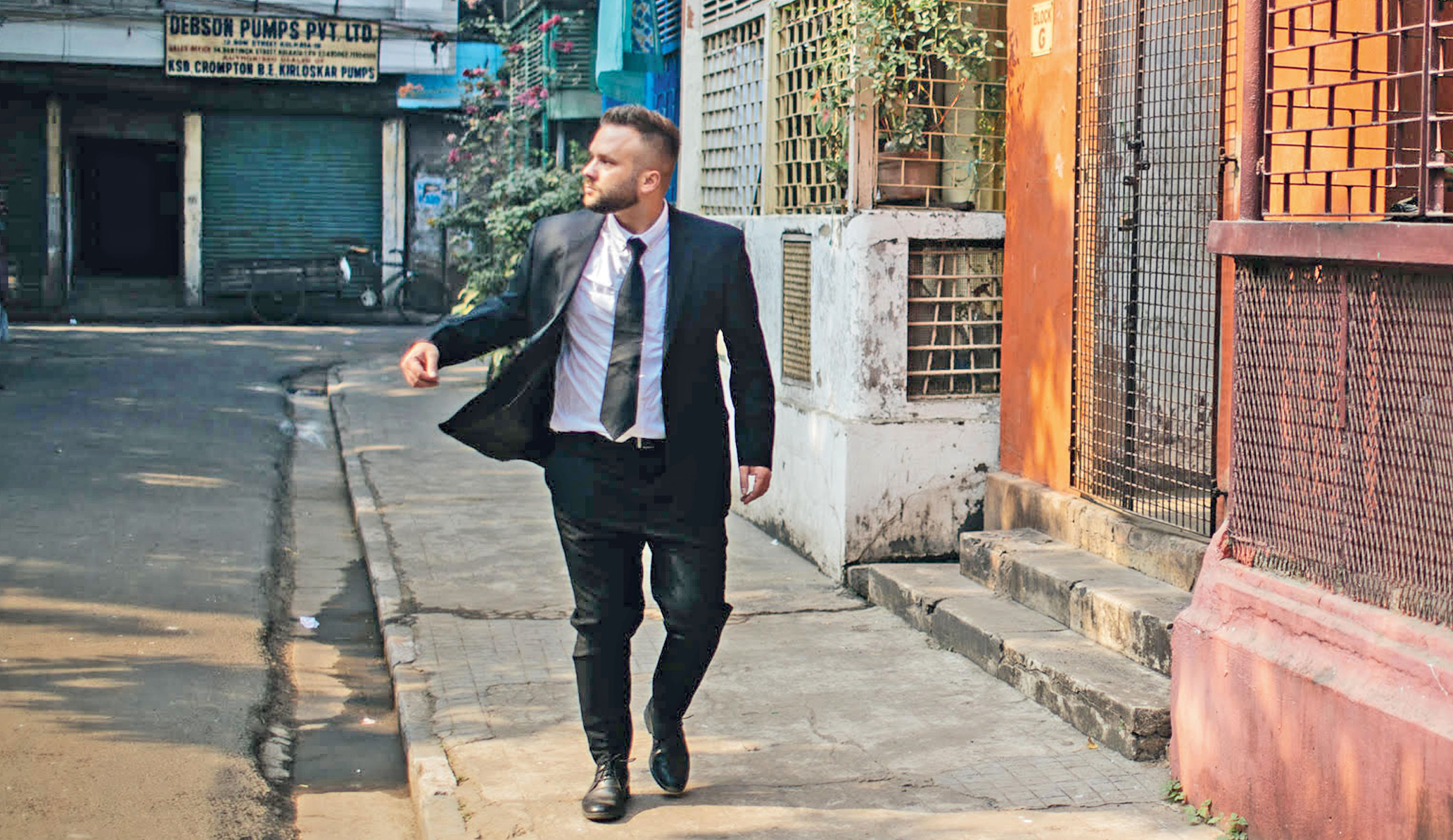 'Calcutta has my heart. It’s one of my favourite cities and has some of my favourite people in it. I don’t think I’ll ever place a deadline on visits, and my connection with the city'
(Telegraph picture)
Mathures Paul   |   Calcutta   |   Published 21.11.19, 11:52 AM

Boston boy Zachary Ray arrived in India in 2011 and then it took him a couple more years to make Calcutta his home. The Berklee College of Music graduate has made several memories here with his wife Amanda and has found friendship in several musicians from the city. The years rolled by and the Hindustan Park resident taught vocals at Calcutta School of Music and has conducted several music shows, including the Assembly of God Church’s annual Christmas celebrations last year. The 33-year-old is now preparing for the next phase of his career — working on singles that would eventually lead to an album.

Helping Zac, as his friends call him, is Nathan Walters, who is a Billboard-charting music producer, songwriter and artiste. Nathan is also a former member of the pop band Plus One, has earned a Dove Award and has sold over 1.2 million albums.

Zac, who is sharing time between Nashville and Calcutta, hits pause to speak to us about how his music is shaping up.

It has been an amazing journey for you. A Boston man with a degree in music from Berklee College of Music in Boston arriving in India, making it his home for nine years and then returning to record music in Nashville and LA. Is it the perfect backdrop for your inspirational pop-inspired music?

Nashville is considered Music City, and they both have such an incredible wealth of talented people. They are both amazing cities and great cities to network and work in, but if I’m being honest, Calcutta is probably a better backdrop. All of the songs I’ve written so far started in Cal.

You just released your first two singles (Chloe’s Song and Refuge) and are currently working on a new song with Billboard-charting music producer Nathan Walters. First, what do you want to put across in your new song? Second, how is Nathan helping you to put things together?

I’m so excited about this new song. Music has such a powerful way of putting life and hope into our world. With this song I’d love to put a message of love across. Nathan is a brilliant songwriter, producer and communicator through music. He’s one of the best in the industry, and he definitely is challenging me to bring my best. He works a lot out of the tower at Capitol Records in LA and give a huge support to the artistes he works with.

How did you meet Nathan? He is a former member of the pop band Plus One and he has also worked on Disney Channel shows, AT&T commercials and with major artistes in the industry. How much of your vision of pop music dovetails into that of Nathan’s? What is the sound we are looking at?

Nathan has worked with the best of the best. His 20 years of experience have allowed him to work with a long list of other industry colleagues, including Jessica Simpson, Nicole Scherzinger (Pussycat Dolls), Darren Hayes (Savage Garden), Monica, David Foster (Celine Dion/Josh Groban), Rodney Jerkins (Sam Smith/Michael Jackson), Michael W. Smith and Amy Grant to name a few. For this song specifically we are working on a sound that kind of mirrors my life. Having such a deep connection with India and Calcutta, I want to create an East-meets-West vibe by using some Indian instruments and sounds mixed with Western pop.

Being an American, you must have always dreamt of working in Nashville, putting together an album. Now that you are in Nashville, in what ways is the reality different from what you had thought of?

Yes, it’s always been a dream to work on music in Nashville. You always hear about so many musicians and friends moving to Nashville and major music cities. I think the reality of the wealth of talent in Nashville really hits you when you walk down the streets. Every restaurant and bar has live music — and they are all incredibly talented.

During your stay in Calcutta you found friendship among several musicians here. What are some of the things you picked up — musically — during your stay here and in what ways does it find a space on the album?

Yes, I have lifelong friends and family in Calcutta, and a lot of them are musicians. I grew so much as a musician and singer in Calcutta. Teaching at Calcutta School of Music, joining a jazz trio band, songwriting with other musicians, they created opportunities for me to better my craft. I think one of the major lessons I learned is that music breaks down barriers — no matter what language, religion, or background you come from.

You are working with Paloma Majumder (of Adil and Paloma)....

I love Adil and Paloma. I’ve been in conversation with Paloma about the current song and she will be joining in on the songwriting process. Her voice is gold.

Every musician wants to create a legacy around himself. How do you want to be perceived as a musician?

I think the greatest legacy a musician could carry around them is a life of integrity. A life of encouragement and empowerment of others around them. Using their platform and music to be a voice for the voiceless. I’d love to be perceived as a musician who stands up for injustice in our world, a musician who put music into the world that speaks of love and brings peace into our world that seems like chaos. I think we all are given opportunities not only to benefit ourselves but those around us.

In what ways do you think your personal life is changing as one single is leading into another?

Each song I release almost feels like I’m breathing in and out. These are words that were put into my heart and mind. Releasing songs put you in an incredibly vulnerable place because you’re showing the world your heart in a way. But there is strength in being vulnerable. So, I feel personal growth in strength and healing in different areas of my life.

When you came to Calcutta, you didn’t set a deadline as to how long your stay would be. Now that you are travelling to and fro (Calcutta to Boston/US), do you now have a deadline for your stay here?

Calcutta has my heart. It’s one of my favourite cities and has some of my favourite people in it. I don’t think I’ll ever place a deadline on visits, and my connection with the city. I am looking forward to February 2020, bringing Nathan to India and meeting with musicians and singers.

What’s your earliest memory of listening to country/pop music? What kind of images did it conjure up?

I grew up in a musical family. My mom loved the Carpenters so I remember listening to them at a very young age. Listening to music at a young age always inspired me to become a musician/singer.

What was the first song you ever wrote? What was it about?

I used to write songs at a very young age… I was six-seven years old. I recently found a little journal where I wrote down words from my first song: “The sun is up and shining... the rain will stay away.” I’m so thankful there is no recording of that floating around!

One project that has been close to your heart is Songs of the Season (to be held in December) at Assembly of God Church. What can we expect this year?

Songs of the Season is one of the oldest Christmas productions in the city. I’ve had the joy and honour of participating in it and help training the choir the past few years. This year is the 52nd SOS production. I’ve been able to hear the music beforehand, and it won’t disappoint the audience. I’m sad to miss this year, and I’ll be waiting for the copy of the production to watch it here in America.

What are the three things India has taught you that you cherish?

First, open your life to others. Second, love others well. Third, relationships are everything in this life.