Advertisement
Home / Entertainment / ‘For me, the central theme is nothing but the journey of life’ — Director Chandrasish Ray decodes Nirontor

‘For me, the central theme is nothing but the journey of life’ — Director Chandrasish Ray decodes Nirontor

‘For me, the central theme is nothing but the journey of life’ 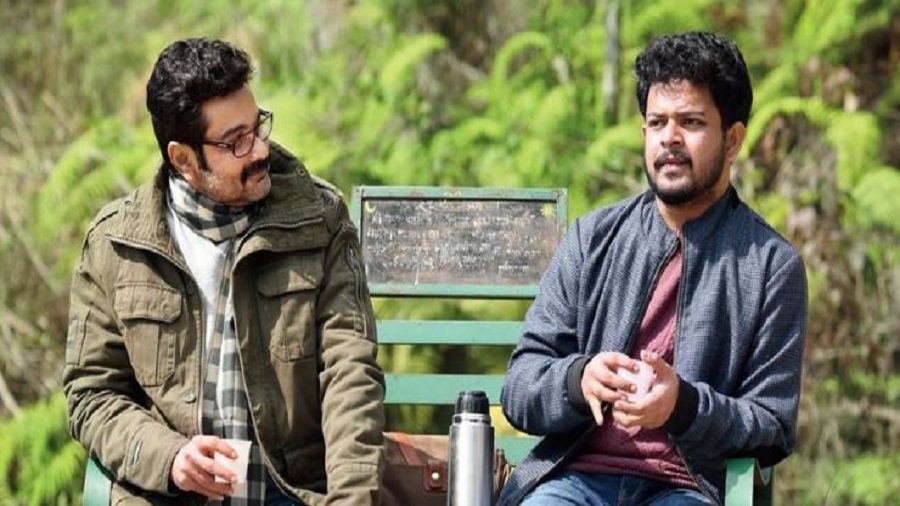 Chandrasish Ray’s film Nirontor follows a middle-aged civil engineer, Biplab Sen (Prosenjit), and his junior colleague, Bhaskar (Satyam), who are on an office trip to look for a plot for the construction of a hotel in the hills. The film goes on to tell their stories, strings together moments of introspection, moves from the hills to the city, explores the themes of life and death and underlines the healing power of human connection. Finally, the film — that is currently streaming on Zee5 — is about dealing with grief and finding hope. The Telegraph chats with  Chandrasish...

How’s the feedback so far?

The feedback is really good. People are also talking about the technical aspects of acting to the cinematography of the film! That is when a film completes itself. It’s not just about the writing and direction. This is the result of the collective effort of so many artistes working so hard together. We are touched as a team.

What is the best compliment you have received till now?

A friend who is settled outside Calcutta got a call from his mother telling him that she watched a really good film after a very long time. He told her that’s my film. When somebody appreciates a film not knowing anything about the man behind it… I feel that’s the greatest feeling.

How did you arrive at the rhythm, pace and visual style of the film?

The rhythm and pace were actually as per script. Some feel it is a very ‘slow’ film. But for me, this was the pace of the screenplay and the film could not be any different. About the visual style, this was a very conscious decision taken with Soumikda (DoP Soumik Haldar) and Tanmoyda (production designer Tanmoy Chakraborty) after discussions over a very long time. Even the decision of camera movements was taken keeping in mind the death as the central point. You see an entirely different style of cinematography before and after death.

How important a role did the editing play in developing montages or underlining a moment?

The montages were written like short bullet notes in the script but the credit of what you see in the final film entirely goes to Subhajit (Singha). It’s a very linear narrative with strange non-linear montages chipped in between, which makes it so interesting. In every moment you see in the film, acting to editing, nobody tried to prove a point. Everybody, probably unknowingly, worked along with each other.

We see the image of a flying bird right after a death, symbolising the flight of the spirit. Was it a tribute to Satyajit Ray’s Aparajito since something similar happened after Harihar’s death?

Haha! That was not in the script. We noticed the kites flying around and came up with the idea while shooting the scene. Yes. It was purely a tribute to Aparajito. I’m glad people are relating to it.

It seemed Bumbada (Prosenjit) was almost in a Rituparno Ghosh film, especially in the way he spoke, in the inflection of the voice. How was the dubbing process? What was your brief to him for that?

Most of the dialogues you hear in his voice were just the mirroring of how he had delivered the lines in the shoot. He came up with that undertone right in the shooting stage. There was no particular brief from me as such. We just wanted to be natural. We wanted to set a certain mood for the film.

What did you discover about Bumbada the actor?

I am still discovering him. Honestly, I never realised in the shoot how great he was because he was doing everything with so much ease and so naturally, it did not hit me back then. I was just too happy to take every shot as it came naturally. I was more drowned in making the film as a whole than look at him singularly. It was much later when I had completed the film that I realised what a performance he had given! It’s very tough to judge your work until you get a third-person view.

The film relies on silences, moments, unhurried movements. At the same time every piece of dialogue informs the story, provides clues and adds up in the end. How challenging was it to write the screenplay? What were you aiming for?

I was enjoying myself while writing the screenplay. I can never be a great story writer. For me, cinema is rather a collection of a few ordinary and extraordinary moments. That’s it. I started with a very thin idea and kept on developing every scene consecutively. So nothing you saw in the film is anything I was aiming for. I had completed writing the first half when a song (Barsan lagi badariya) hit me. I immediately rejected the entire script. The moments changed… the story changed… the characters changed! So you see, all these just happened. I believe good things happen like this. It has happened before. I hope it just happens like this forever.

In the film there is someone dying, a childless couple and a birth. Was it the central theme?

It was an entirely different idea when I had begun writing. There was an incident that happened and I was so moved by it, that I was trying to sketch a narrative on an outline of that. I wrote everything separately — the death, the childless couple, and the birth. This completed a cycle. But that’s not anything I ever wanted to put across in bold underlining. I don’t think it was the central theme. For me, the central theme is nothing but the journey of life.

Is it inspired from a true incident?

Yes. Partially… I mean the crisis points… yes. This is a ‘what-if-it-had-been-all-good’ reply to a couple of incidents I wish never happened. I started with just one incident but the other one gradually came in very slowly and I never knew it was so strongly present in my subconscious. I still wish we learned to seize the day. This is all we have, man! We don’t have tomorrow. We are still fighting for the silliest of things and we’d all be gone much before we realise that.

There’s a long conversation scene where Biplab tells his story in a room. How confident were you about the scene? Why do it in that specific way?

We just wanted Biplab and Bhaskar to chat over a couple of drinks and come out to each other. I don’t know how I can rate my confidence but I was not under-confident… that I can tell you. We had just one evening for the scene. We started in the late afternoon covering the windows for a day-for-night set-up and ended after midnight. That was really very less time for a scene like that but we were well prepared and we just shot as per our plan.

The final sequence...when Biplab goes to the north Calcutta home. How challenging was it to shoot that scene ?

It was a very emotional scene. I mean… I probably made the film for that one scene. It was the second day of the shoot (in the first schedule). Bumbada was perfectly ready and so was Poonam (Poonam Gurung). I still remember the dialogue delivery of both the actors was so low that I could actually see that mood reflect on my team! The entire unit was whispering instructions to each other on the floor even after we had cut a shot! The vibe you see in the scene was right there on the floor. Soumikda keeps on telling me that it is that positive vibe and friendship in the entire team that is finally showing in the film, touchwood.

I don’t know. I am working on a couple of ideas but I don’t think I’ll lock anything until this Nirontor hangover is over. For now, I got myself a bicycle a day after the release as a gift to myself for my first film and I’m happily cycling around.