Dwayne and Gal on Red Notice 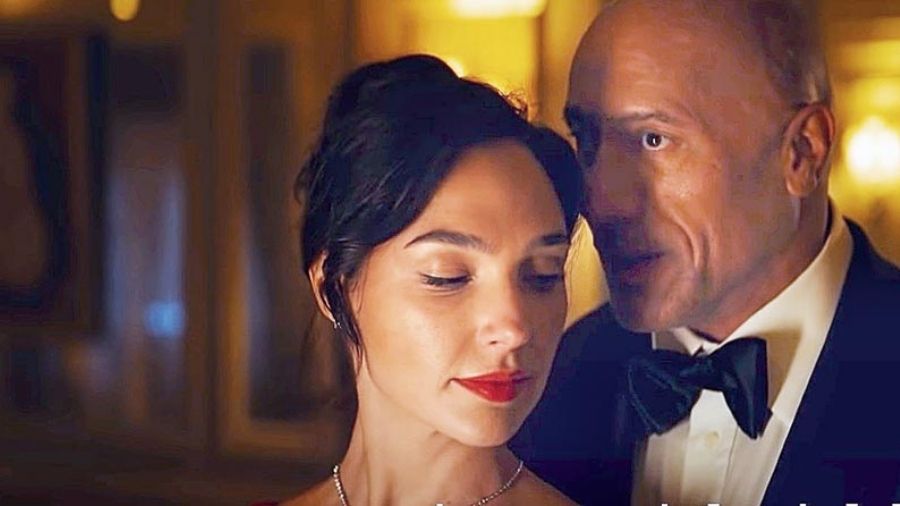 Dwayne Johnson, Gal Gadot and Ryan Reynolds team up for the action-comedy heist film Red Notice. Last week, we got a chance to catch up with Dwayne Johnson and Gal Gadot over a very early morning video call on their chemistry in the film, what makes Dwayne dance like ‘a freaking ballerina’ (in Gal’s words) and who would they pick to partner for a real-life heist. Red Notice streams on Netflix today.

First up, what were your reasons to sign up forRed Notice?

Gal Gadot: Dwayne! In one word! (Laughs) Well, to be honest, when our wonderful director, Rawson Marshall Thurber, pitched the idea for this movie, I was blown away by the ambition of it and how surprising the story is. I was also intrigued to be able to play a character which is different from what I am usually used to playing.

Dwayne Johnson: It was the same thing my amazing co-star just said. It was always Gal that Rawson had in mind for the part of The Bishop and the moment he said her name, I was like, ‘Oh, I love her! She is one of my favourite human beings, and she will be amazing in this!’ She plays one of the most wanted art thieves in the world. That automatically is intriguing to me as a movie fan.

Gal: To be fair, he was attached to the film even before I heard about it! (Both laugh)

Dwayne: I had a small role, a supporting role (laughs). And then my role grew!

Both of you are veterans at action films. Did you have to do anything specific for this one?

Dwayne: Well, the intention is to raise the bar every time. None of us are strangers to action. Raising the bar, even given the experience we all have, is not easy to do. It’s challenging, and there is a lot of great action storytelling happening out there. As serious as the action sequences are in this film, there is also a good deal of comedy in them.

Gal: A lot of style too... it looks very beautiful.

What was it like doing the much-talked-about dance scene in the film?

Gal: We rehearsed for the dance sequence in the film, and it was such an honour to partner with someone like DJ (Dwayne Johnson). My poor feet! (Laughs) Turns out that DJ is a ballerina with the lightest feet and it was amazing!

Gal: To be honest, I was a bit nervous in the beginning because DJ is a giant of a man and I have feet down there! (Laughs) I wasn’t really sure what was going to happen to me! I kept telling him, ‘DJ, we got to practise, we got to rehearse’, and he was super cool. He kept calming me down saying, ‘Don’t worry, this is going to be great!’ And, of course, that just made me more nervous. But he showed up and this guy is a freaking ballerina! I don’t know how it works with the laws of physics, but this guy is such a good dancer!

Dwayne: Truly, it all comes down to the dance partner that you have. She was leading and I was trying to keep up. It takes two to tango (smiles).

What was the experience like of working together, and with Ryan Reynolds?

Dwayne: We wanted to make a great movie. And a lot of times, with something like this, the script dictates what the set is going to feel like. This film is fun and it’s ambitious — as Gal said — and it has some twists and turns and surprises... and we had a great time. We also had to buckle down because we shot it during Covid, and that was very challenging. But we all, including the crew, rallied together — we had about a 1,000 crew members — and we made the best movie that we could.

You have starred together before in Fast & Furious. What did the two of you say to each other when you first met on the set of Red Notice?

Dwayne and Gal (in unison): Good to see you! Yeah, we are doing this together! (Laughs)

Dwayne: We actually did a chest bump! (Laughs)

Wonder Woman is a paragon of virtue and stands for all that is good. Gal, what was it like being on the other side, so to speak, in Red Notice?

Gal: I had a lot of fun! As an actor, you want to be able to explore different colours and different qualities in the characters that you play. And this one certainly gave me this opportunity and I super enjoyed playing The Bishop.

Dwayne: Should we take this moment to speak about the Evil Queen in Snow White... because that’s what Gal plays next....

Gal: Red Notice really opened up my appetite to play the villain.

If you got to plan a real-life heist with your Red Notice co-stars, who would you pick?

Gal: DJ! Because he’s sitting next to me right now! (Laughs)

I know DJ will surely pick me...

Dwayne:  I sure will!

Gal: I think the two of us work so well together, you know.

Dwayne:  I don’t want to be stuck in a heist with Ryan Reynolds! (Laughs)

If you had to steal one thing from each other, what would it be?

Gal: Awwww! There you go! So if I could steal something from Dwayne’ The Rock’ Johnson aka DJ, it would be his smile.

Dwayne, you have a special connection with India. You have a huge fan in Bollywood actor Varun Dhawan and Priyanka Chopra starred with you in Baywatch. Would you be interested in doing a Bolly film and have you ever been offered one?

Dwayne: I haven’t been offered one yet, but I would love to do it! When you have two fantastic movie cultures like Bollywood and Hollywood, there should be more crossovers.

Gal: Dwayne would do a Bollywood film so easy!

Dwayne:  I don’t know about that! (Laughs)