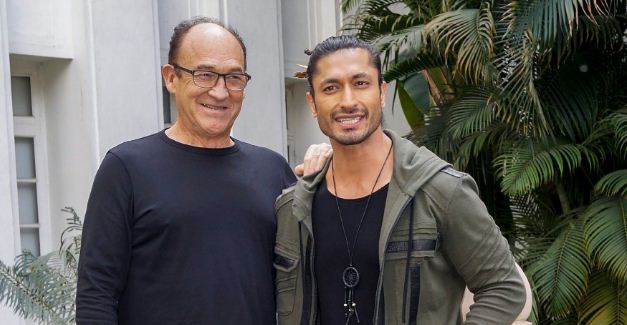 It’s rare to have a Hollywood director move East to make his Bollywood debut but if Chuck Russell is to be believed, he’s been waiting for this opportunity for some years now. Best known for directing the horror film A Nightmare on Elm Street 3: Dream Warriors, the action-adventure The Scorpion King and the cult comedy The Mask, Russell’s first Bollywood venture is the mainstream action entertainer Junglee.

The film stars Vidyut Jammwal, as a vet who’s grown up around elephants on his father’s forest reserve. The Telegraph met the Hollywood director, who launched actors like Jim Carrey, Cameron Diaz and Dwayne ‘The Rock’ Johnson, in his trailer van at Mehboob Studio in Mumbai to chat about working with animals, his love for Bollywood and why directing Vidyut was a bit of a challenge.

What brought you to Bollywood?

In the mid-’80s, I had produced a comedy that didn’t translate well overseas. So when I got to direct The Mask, I wanted to do a comedy that would translate all around the world. The Mask was so well-received and I was so delighted that I decided to do as much global cinema as I could. I first came to India because of the amazing artistes here and performers, and I was talking to people about co-production. Priti Shahani (producer) called me out of the blue and sent me the story for Junglee.

I thought it was an amazing subject, and I immediately thought that it suited my style of adventure-comedy, with a big heart and the empathy for these elephants. I immediately thought if I could entertain and make that issue a part of the conversation, it’s better than all the documentaries that are so difficult to watch because they freak one out. The real relationship between humans and elephants is in the DNA of India and I thought to myself that I’d never get asked by Hollywood to do a movie like this, so this was the opportunity. It’s of global interest and a Hindi story.

A still from Junglee.
Junglee

Have you been to India before the film came your way?

Twice before. After The Scorpion King I was interested in doing action pictures for the global audience. I was interested in charismatic Indian actors and actresses and wanted to incorporate them in an adventure story that could be a co-production. And then Junglee pops up, a true Hindi story, and I realised why they asked me. I could bring some fun and I’ve done a lot of work with animals.

Was language a barrier during the making of the film?

I come from theatre and when I have someone like an action actor, I like to put him through my world of improvisation. And believe it or not, Vidyut was wonderful at improvisation. So the process starts with an English screenplay and then we got to rehearsals and improvisations in English, while the Hindi writers began translating.

I, then, worked with the Hindi screenplay writers because you just can’t translate directly from English. New jokes had to be written in some cases. By the time we switched to Hindi, I knew every line and every beat of the story between my actors and my writers, which was a wonderful collaboration.

Did you have fun directing the songs and dances?

Of course. That was one of the reasons I came to India in the first place. Directing songs and dances was a riot. I’ve done it before in The Mask, I’ve done musicals on stage when I was a kid and even performed in them. It was a huge opportunity. We chose not to do lip-sync songs, so we wrote a festival into the script to strike a balance, because it’s a fun movie and there’s comedy but there’s also an important subject — if elephants are in jeopardy, it’s hard to have people dancing.

Vidyut is an action actor and you’ve worked with some of the best in the business. How does he measure up?

Oh my God, he’s great. These are all very dissimilar individuals obviously, from very dissimilar backgrounds but they all have one thing in common — discipline. I’ve also done scene work with people like Chris Hemsworth, and some of it’s obvious, like keeping their bodies like that and the athleticism. There’s also the craft with people like Tom Cruise who know their lines and then all the technical aspects of a scene. The one thing that’s common to all of them is passion and discipline, which I saw right away in Vidyut. He was the hardest working of all these people, but what makes him unique is that his style of action is martial arts based, and with him it’s as little about illusion as possible. My challenge with him was about following safety protocols and him wanting to do everything. We found a common ground over the course of the film (laughs).

Elephants are integral to this story and in the past you’ve had camels in The Scorpion King and a dog in The Mask. What is the trick to directing animals?

I discovered early on that I could cast an animal just like a person. I’m a big animal lover and it makes my actors better actors, because the animal is kind of acting, and kind of not depending on whether the animal likes the actor… if there’s chemistry. It’s about that animal and that actor; just like there’s chemistry between Jim Carrey and Cameron Diaz, there is chemistry between Jim Carrey and that specific dog. It’s always that dog and never a double.

There’s something really interesting about the spirit of animals. Elephants turned out to be the most sensitive, spiritual animals I’ve ever met; and I’m a huge dog and cat lover. I miss the elephants we shot with for Junglee. I cast those elephants and I miss one in particular, the big tusker. He’s amazing and he got to know Vidyut; so it’s a real relationship on film. Pooja (Sawant, plays Shankara) got to know Didi, the smaller elephant. We spent months with those two elephants.

What did it take to build a relationship with the elephants?

First, it was about me learning the natural social behaviour of elephants. I then built scenes around doing natural things with the elephants in their natural environment. It’s why we went to Thailand to shoot. I said I’ll do the movie if I can go to this conservation centre in Thailand. I used visual effects, but only to create the appearance of jeopardy. The elephants only worked during the day in their natural habitat with the mahouts they grew up with. Vidyut, Pooja and I spent many weeks with those elephants, creating those relationships and I built staged scenes about what they do naturally and how they reacted, and it worked out into a great story.